Mayor Rahm Emanuel is suing the DOJ over threats to halt federal funds, while San Francisco is reaffirming its status by paying an illegal immigrant $190,000; Claudia Cowan reports on 'Special Report'

Attorney General Jeff Sessions fired back Monday at the lawsuit filed by the city of Chicago over the Justice Department’s threat to withhold federal money from so-called sanctuary cities, saying “no amount” of money will help a city that won’t help its own residents.

“This administration is committed to the rule of law and to enforcing the laws established by Congress. To a degree perhaps unsurpassed by any other jurisdiction, the political leadership of Chicago has chosen deliberately and intentionally to adopt a policy that obstructs this country’s lawful immigration system,” Sessions said in a statement.

The city filed its suit over the Justice Department's threat to withhold Byrne grants for law enforcement groups from sanctuary cities. The city’s mayor, Rahm Emanuel, likened this to “blackmail.”

“Chicago will not be blackmailed into changing our values, and we are and will remain a welcoming city,” Emanuel said. “The federal government should be working with cities to provide necessary resources to improve public safety, not concocting new schemes to reduce our crime-fighting resources.”

Sessions said the city of Chicago has chosen to protect “criminal aliens who prey on their own residents” instead of enforcing laws meant to protect law enforcement. 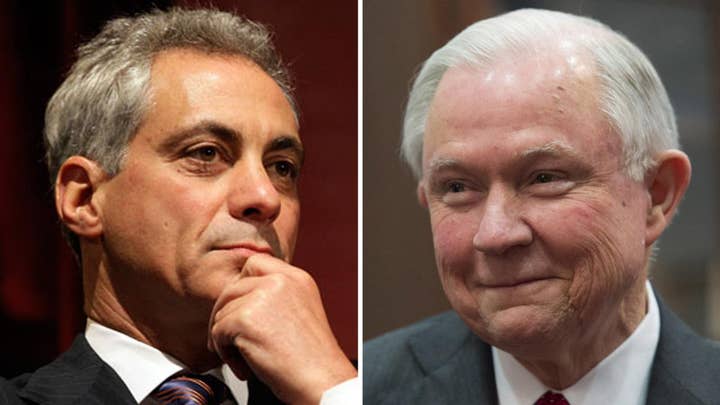 The attorney general called the “open hostility” against protecting law enforcement -- while protecting criminal aliens -- “astounding” given the influx of Chicago’s violence crime.

“The city’s leaders cannot follow some laws and ignore others and reasonably expect this horrific situation to improve,” Sessions continued.

The grants, named for former New York City police officer Edward Byrne, who was murdered in 1988, would provide $3.2 million to Chicago, to be used for police vehicles. Funding from the grant is a small fraction of the city's budget.

A requirement added to the grants would force local jurisdictions to report to federal officials of the release of illegal immigrants from police custody at least 48 hours in advance, which Emanuel said would violate citizens’ “fundamental rights.”

Emanuel “complains that the federal government’s focus on enforcing the law would require a ‘reordering of law enforcement practice in Chicago,’” Sessions said. “But that’s just what Chicago needs: a recommitment to the rule of law and to policies that rollback the culture of lawlessness that has beset the city.”

Emanual said he did not think Chicago would be the last sanctuary city to file a lawsuit of this nature. Other cities the DOJ contacted about withholding funds of this nature include Baltimore, Albuquerque, N.M., and Stockton and San Bernardino, Calif.

“This administration will not simply give away grant dollars to city governments that proudly violate the rule of law and protect criminal aliens at the expense of public safety,” Sessions concluded. “So it’s this simple: Comply with the law or forego taxpayer dollars.”