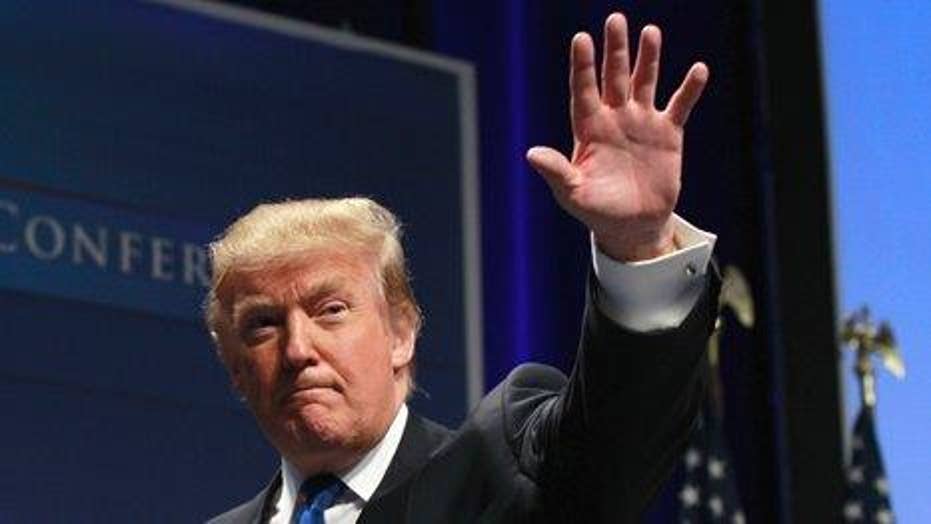 Article II, Section 2 of the Constitution declares that the president “shall nominate, and by with the Advice and Consent of the Senate, shall appoint Ambassadors, other Public Ministers and Consuls, Judges of the Supreme Court, and all other Officers of the United States.”

It just doesn’t say anything about how fast the Senate “shall” provide that advice and consent.

It’s too early for Trump to complain about a provision in this spending bill or that budget package. But the president’s initial taste of the legislative branch centers on nominations to his Cabinet and other key administration posts. And the Senate, being the Senate, has only approved four of his nominees.

That’s it. No more until next week.

We’ll see how much the pace of the “the world’s greatest deliberative body” could irritate the combustible new president – a business executive who demands speed and efficiency – not debate.

Trump wanted Pompeo in place Saturday for his visit to the CIA. But Pompeo’s fate wasn’t decided until Monday.

“They’re playing little political games,” groused the president at the CIA. “He was approved essentially.”

Sen. Ron Wyden, D-Ore., wanted the Senate to burn up to six hours debating Pompeo. The Oregon Democrat harbored reservations about Pompeo’s interest in expanded surveillance powers. Meantime, with the Senate not meeting on Inauguration Day until late afternoon, Republicans wanted to rush through and confirm Mattis, Kelly and Pompeo in one, fell swoop -- then book it to the inauguration balls.

“I don’t see how we’re going to have a debate while everyone is trying to fit into their tux,” protested Wyden.

As a result, the president didn’t get Pompeo to join him at the CIA for his photo op and had to wait for confirmation on Monday night.

Other nominations remain trapped in the Senate’s confirmation Phantom Zone.

The only tool Democrats appear to have in their arsenal is delay. Democrats are no fools. They know the president isn’t used to sitting around waiting for the Senate to act. So, forcing the Senate to run various parliamentary traps could be a tactic to get under the skin of the chief executive and goad him into blurting something intemperate.

Several nominees put up rocky confirmation performances – coupled with serious questions about their ethics. Consider the plights of Education Secretary pick Betsy DeVos, Office of Management Budget (OMB) Director nominee Rep. Mick Mulvaney, R-S.C., and Rep. Tom Price, R-Ga., whom the president tapped to head the Department of Health and Human Services. It’s still possible any of those nominations could go sideways on the floor. But so far, all Democrats can do is make nominees – and Trump – bide their time.

It’s ironic, really for Democrats. Not so long ago, there was a point where Democrats really could have derailed a number of the president’s nominees via a procedural gambit. But now, all Democrats can do is slow things down.

The margin in the Senate is just four seats: 52-48 (two independent senators caucus with the Democrats). That means Republicans can only lose two votes per nominee (without a vote from Vice President Mike Pence, casting a ballot in his capacity as president of the Senate) and not need assistance from Democrats to confirm the president’s picks. It only takes a simple majority to confirm a nominee on the Senate floor. But in 2013, Senate Democrats took the extraordinary step of altering the Senate’s precedents. As a result, Democrats lowered the bar to end filibusters from 60 votes to a majority vote (often 51). The so-called “nuclear option” liberated some of President Obama’s administration and judicial nominations which languished under the 60-vote threshold. Dropping the procedural bar to a simple majority pried loose numerous nominations which were otherwise stalled.

Of course, many Senate Democrats would like nothing more than to torpedo a few of Trump’s picks. But with 52 seats at their disposal, Republicans already have enough votes to stave off Democratic filibusters. Getting to 60 under the old regime would have been a different story.

But all of this fighting is truly about something else. It’s the appetizer for the main course. Trump will announce his pick to succeed the late Antonin Scalia on the Supreme Court. And keep in mind that when Democrats executed the nuclear option, they did so specifically without touching the procedural bar for Supreme Court nominees. Supreme Court nominees still require 60 votes to overcome a filibuster.

Never before has the Senate filibustered a Supreme Court nominee. The Senate sidetracked the nomination of Associate Justice Abe Fortas to become chief justice on a procedural vote which failed to garner 60 yeas. But Fortas was already on the high court.

McConnell observed that Presidents Clinton and Obama both got the nominations of Justices Ruth Bader Ginsburg, Stephen Breyer, Sonia Sotomayor and Elena Kagan through the Senate in their first terms with no problem. He expects the same for Trump’s nominee.

The Cabinet fights are just the appetizer. The Supreme Court nomination will be the main course.