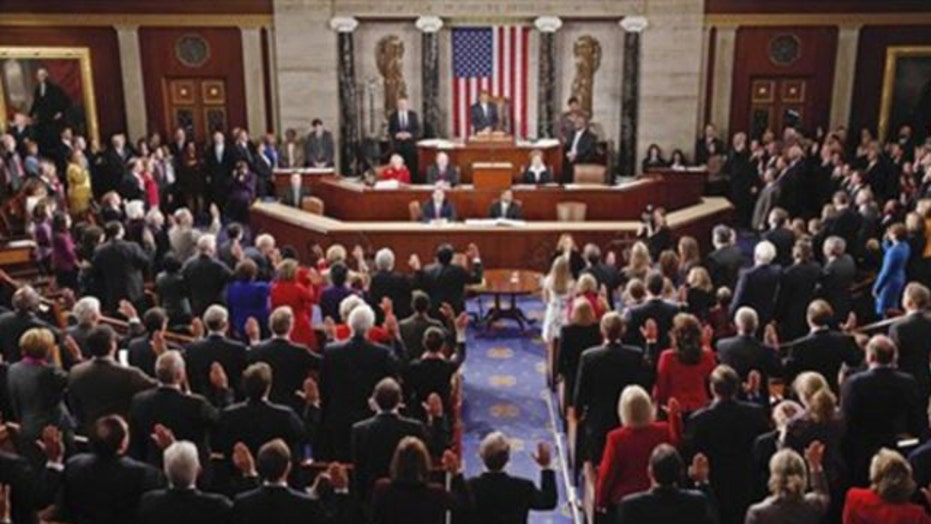 Will a third party step in?

SENATE DEMS GO OLD TESTAMENT: AN EYE FOR AN EYE - Senate Democrats are hunting for six Republicans votes to help Majority Leader Harry Reid jam the GOP-controlled House. With debt-limit doom just three days away, Senate Democrats are still finding time to pay back the House for making the focus of the current fiscal fights all about ObamaCare. Rather than rush to a deal, the evident effort in the Senate is to make House Republicans gag on an increase in federal spending with zero concessions on President Obama’s health law. Democrats over the weekend dissed a plan from Sen. Susan Collins, R-Maine, to allow current spending levels to stay in place until March, while raising the debt-limit through January. Collins’ plan would also have delayed for two years a new ObamaCare tax on medical devices and beefed up anti-fraud measures in the law. But Senate Democrats are not looking for a quick solution. They are looking to run out the clock and to punish Sen. Ted Cruz, R-Texas, and other conservatives for pushing a doomed bid to defund the law.

[Backroom bargaining:  With all ears tuned-in for hints of behind-closed-doors deal on the budget/debt limit impasse, the Senate is slated to convene at 2 p.m. ET]

Equally impossible - Republicans started the messy debate over government funding and borrowing with an impossible ask: ripping out funding for a cherished new Democratic entitlement program. Now, Senate Democrats will return the favor and are demanding the undoing of current spending levels set in the 2011 debt-limit debacle. Those rates, known as “sequestration” are considered sacrosanct to Republicans of all stripes. But now, thanks to the “defund” gambit, Republicans are scrambling to hold ground that most had taken for granted when the back-and-forth began.

Baier Tracks: Unbelievable… “What seemed like a path to at least a partial solution on Friday, seems today like a path to more confusion. While the going bet is, ‘They'll work everything out. They have to,’ there is increasingly a hint of, ‘Um... Maybe they won’t.’ Democrats are now demanding that any talks on the debt-ceiling increase start at a pre-sequester figure. That prompted normally negotiating Republican Sen. Bob Corker, R-Tenn., to tell Chris Wallace that the fight over the debt limit is ‘typically a point where you try to create reforms and reduce deficits, so to agree to something that raises spending from previously agreed to levels, I just can't imagine that. I just can't imagine how that has any possibility of becoming law.’ Many people can't... and we're one day closer.” – Bret Baier.

[“Republicans started off in a place that was an overreach to try to change a law that is central to the president's agenda and now Democrats are in the position of being one tick too cute and are now overreaching…We need to get back to the middle of the road ... with something for both sides.” – Sen. Bob Corker, R-Tenn., on “Fox News Sunday With Chris Wallace”]

NO NUKES… YET - Appearing on NBC’s “Meet the Press” Sen. Dick Durbin, D-Ill., noted that Democrats might employ the “nuclear option” to change Senate rules and lower the 60-vote threshold on legislation required to push for an increase of the debt limit. Sen. Joe Manchin, D-W.Va, responded on “Fox News Sunday With Chris Wallace” saying, “I don't think we need to go that direction whatsoever and I think we can come to an agreement.”

[“Maybe we need to get Joe Biden out of the witness protection program.”— Sen. John McCain, R-Ariz., on Biden’s absence from budget negotiations, on CBS’ “Face the Nation”]

Veterans to White House: ‘tear down these walls’ - Fox News: Veterans marched on Sunday in Washington in protest of the partial government shutdown that has kept them and other Americans from visiting war memorials across the country, with support from former Gov. Sarah Palin, R-Alaska, Sen. Ted Cruz, R-Texas, and other politicians. Some metal barricades were carried the roughly half-mile walk from the memorial to the White House, where they were left near the fence in front of Pennsylvania Avenue.

NO SHUTTING DOWN 2016 - Cruz wins over ‘Values Voters’ - Sen. Ted Cruz, R-Texas, won a Saturday straw-poll of religious conservatives at the 2013 Value Voters Summit in Washington. Cruz took 42 percent of the vote with Dr. Ben Carson and former Pennsylvania Sen. Rick Santorum each getting 13 percent. Sens. Rand Paul, R-Ky., and Marco Rubio, R-Fla., rounded out the field with 6 percent and 5 percent respectively.

Christie slams Congress - In an interview with Daily Beast, Gov. Chris Christie, R-N.J., had some harsh words for both parties when it comes to the government shutdown: “You send people down here to run the government, not to shut it down. And everybody’s failed.” When asked about his thoughts on the current state of the GOP, Christie offered, “I don’t worry about the Republican brand. Not my job to worry about it.”

THE OBAMACARE ATTACK THAT WASN’T - Washington Examiner’s Byron York imagines what the past two months might have looked like had Republicans not been focused on bitter internal fighting: “Instead of pounding Obama on the mandates, defects, false promises, and expense of Obamacare, Republicans ended up pounding themselves…Obamacare will still be a major, and for many unwelcome, factor in American life. But what an opportunity missed, at such a crucial time.”

E-VERIFY NOT VERIFYING DURING SHUTDOWN - The Department of Homeland Security recently notified employers all over the country that E-Verify, the online system that allows them to check the immigration status of potential workers, will be unavailable during the partial government shutdown. Correspondent Alicia Acuna considers the concern that illegal immigrants and unscrupulous employers could take advantage of the shutdown.

YOUR VOICE WAS HEARD - Men, women, Republicans, Democrats and independents all agreed with Charles Krauthammer when he said that the debt limit was a “trump card” for the GOP in the ongoing budget debate. Bing Pulse also tracked wide agreement among all parties with the assessment from Sen. Lindsey Graham’s, R-S.C., that polls are driving congressional activity. Both men and women agreed with columnist George Will’s conclusion that most Americans do not raise a concern about an issue until a pollster asks them.

Peak viewer engagement on Friday’s “Special Report with Bret Baier” was 33,000 voters per minute, coming when Sen. Mike Lee, R-Utah, told the audience at the Value Voters Summit, “We've seen an explosion of federal government power. None more important or significant or dangerous than ObamaCare.” Bing Pulse measured a total of 188,000 viewer votes during the All-Star Panel. Was your voice included? Make sure by taking your seat on the panel. Get Friday’s full results here.

Krauthammer found agreement from Democrats when he stated the ObamaCare’s exchange debut was, “...the worst rollout since new coke or new Miley Cyrus.” Women disagreed with Krauthammer’s conclusion more than men. There is a reason it’s called the All-Star Panel, because there is always room for you.

WITH YOUR SECOND CUP OF COFFEE…Richard Kahlenberg, of the conservative Century Foundation, considers how a case before the Supreme Court this week could help bring an end to racial preferences in higher-education admissions. From Kahlenberg’s WSJ OpEd A Fresh Chance to Rein in Racial Preferences: “A ruling in [Schuette v. Coalition to Defend Affirmative Action] that promotes race-neutral strategies to boost minority admissions would reinforce the message the court tried to deliver last term in Fisher v. University of Texas but has largely fallen on deaf ears. In Fisher, the justices supported higher education's goal of achieving a racially diverse student body, but they gave universities a strong push toward creating that diversity through race-neutral strategies...”

Got a TIP from the RIGHT or LEFT? Email FoxNewsFirst@FOXNEWS.COM

MCAULIFFE DONOR CONTROVERSY - A $120,000 donation to Democratic gubernatorial candidate Terry McAuliffe’s campaign from The Liberian International Ship and Corporate Registry (LICSCR), which runs Liberia’s shipping industry, is drawing scrutiny. From the News Leader of Staunton, Va.: “The company is a frequent target of organized labor, making it an odd ally for McAuliffe, who enjoys robust union support… LISCR also played a controversial role during the bloody regime of former Liberian president Charles Taylor, whose war crimes conviction by the U.N. Special Court for Sierra Leone was upheld last month.”

IF OBAMA CAN TALK TO ROUHANI, HE CAN TALK TO DR. K - Charles Krauthammer explained to Howard Kurtz on “#Media Buzz” Sunday why he agreed to an off-the-record meeting with President Obama. Krauthammer told Kurtz, “He has got deadlines coming up and I think he wants to make as many friends as he can, or at least to make his case. The other interpretation is that if he can talk to [Iranian President] Hassan Rouhani, he figured he can now talk to me.”

KT FROM CAIRO - Fox News Security Analyst KT McFarland was one of the first American journalists to meet with Egypt’s leaders since the coup that ousted that country’s Islamist government. She shares her take for Fox News Opinion: “While Washington quibbles over whether Egypt’s current government meets the legal definition of a coup… Egyptians are grappling with life and death issues of survival…We talked to many people neither the U.S. government nor western media has bothered to meet with. Not surprisingly, we heard a very different story.”

FATHER OF THE BRIDE - Scott Nagy, 56, of Brunswick, Ohio did not let his battle with terminal cancer keep him from fulfilling a promise he made to his daughter. Nagy’s doctors told him that he faced long odds in surviving until the original wedding date next year, so his daughter, Sarah, moved up the event. Dad arrived by ambulance to give her away from a hospital gurney. “It was a promise I made in March, to walk her down the aisle,” Nagy told the Cleveland Plain Dealer. “She's my princess. This is my definition of walking down the aisle,” adding “There are no guarantees in life…this is a bonus.” Thanks to Skype, Dad was able to deliver the traditional toast at the reception.

THE OCEAN BLUE…Today marks the observance of Christopher Columbus’ Oct. 12, 1492 arrival in the New World. But what don’t you know about Italy’s most famous explorer and his voyage? Salt Lake City’s Deseret News is glad you asked. On the paper’s list of Columbian facts: Columbus wrote in his journal that he lied to his crew about the distances sailed each day “that the crew might not be dismayed if the voyage should prove long.” And do you know where Columbus first stepped ashore? It wasn’t Hispaniola. The Bahamas can claim the title. Or how many years it took for Columbus to begin to realize the magnitude of his discovery? Nearly six. And who held the first Columbus Day celebration? Why, politicians, of course. Tammany Hall, the birthplace of New York Democratic machine politics, was also the birthplace of Columbus Day, hosting the first celebration in 1792.