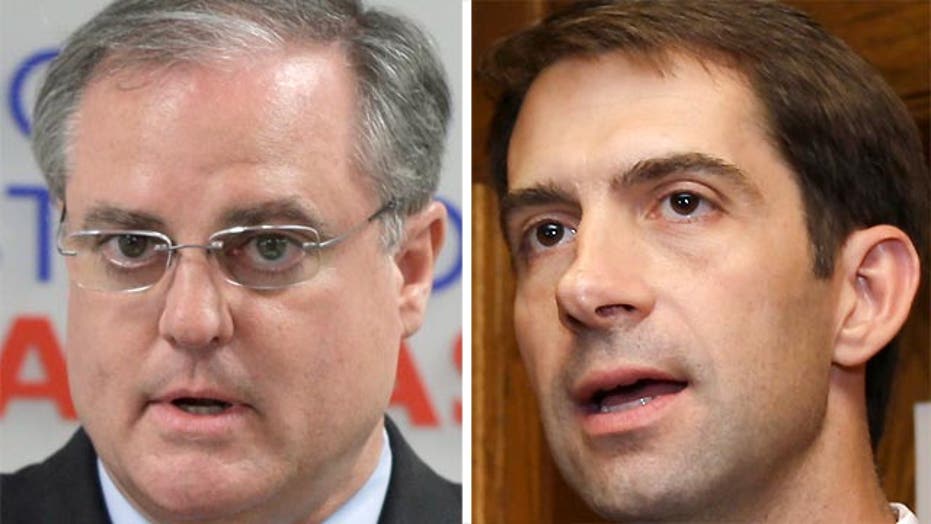 This time around, Pryor is in the fight of his political life against Republican Rep. Tom Cotton, who won his very first election less than two years ago. A new poll from Democratic-leaning PPP shows Cotton running 5 points ahead of the veteran Democrat, who comes from an Arkansas political dynasty (a new USA Today poll has Pryor up by 2). Pryor's father David is a former governor, who also held the Senate seat Pryor now occupies.

This week, Pryor re-launched his campaign with a lengthy report titled "What's At Stake," highlighting votes he says show Cotton is bad for Arkansas.

Pryor also points out that Cotton voted against the farm bill, which he claims is near-sacrilegious in a state so dependent on agriculture.

"Twenty-five percent of our state's economy is agriculture," Pryor told Fox News. "And he was the only member of the Arkansas delegation to vote against the farm bill. That ought to tell you something."

Cotton, who grew up on a cattle farm in Dardanelle, Ark., dismisses Pryor's attack, insisting many farmers told him they didn't support the bill. But Cotton's main reason for voting no was that the Senate insisted on keeping food stamps in the farm bill, rather than breaking the issues into two separate bills as the House did. Though the farm bill actually cut spending, Cotton said it was an unreasonable expense.

"We can't keep spending more than we take in every single year," Cotton told Fox News. "And we can't continue to let the Obama administration impose all these burdens on farmers and ranchers in Arkansas. Burdens that Mark Pryor's helped facilitate."

Cotton's main point of attack against Pryor is to put the senator squarely in the pocket of President Obama. The president lost Arkansas to Mitt Romney in 2012 by 24 points. And he remains so deeply unpopular here that Pryor doesn't want him campaigning on his behalf.

While Pryor votes with the president the vast majority of the time, he has also taken opposing positions on major issues like the Keystone XL pipeline, which Pryor told Fox News is an economic no-brainer and critical component of America's energy security.

At the same time Cotton is hoping to make this race about the president, Pryor wants to make it about the outside interests backing Cotton. Cotton has received heavy support from the Koch Brothers and Club for Growth. Pryor charges that Cotton's votes in Congress have aligned perfectly with their political and economic agendas.

"When you look at his voting record it's just very clear that he's not listening to us here," Pryor told Fox News. "He's listening to the billionaire backers that are supporting his campaign."

Cotton actually laughed out loud when asked about Pryor's charge. "It goes to show how desperate Mark Pryor has become," he told Fox News. "I mean, he's been in office for 12 years. He's been running for offices for 24 years. Doesn't have a single thing on which he can campaign positively."

Cotton's campaign is benefiting somewhat from the ongoing military strikes against the Islamic State in Iraq and Syria, which have put national security and fear of terrorism on the worry list of many Arkansans.

Cotton is a veteran of both Iraq and Afghanistan, joining the Army after graduating Harvard Law and working a couple of years to pay off student loans. Unsurprisingly, he is a hawk on national security, and paints Pryor as soft on the issue, pointing out that the senator rejected training Syrian rebels in the summer, but is now siding with the president.

"Two months ago I don't know if he was more interested in scoring political points -- or now he's just dancing to the tune that the president is calling, but he's been weak and unsteady when it comes to protecting the safety and security of Arkansans," Cotton told Fox News.

Illustrating the uphill climb Pryor faces, the Real Clear Politics average of polls has Cotton ahead by slightly more than 2 points. But Pryor has something Cotton does not: Legacy. Like the Landrieus in Louisiana, the Pryor name counts for a lot in Arkansas.

Political analyst Rex Nelson believes the coat-tails of a political dynasty may be the only thing that could prevent a Cotton victory.

"Cotton loses in the end," Nelson gamed out for Fox News,  "because there were a majority of Arkansas who said -- look we don't much like the president. We don't like the national Democratic Party. But Mark's a Pryor. We know his daddy. We know his mommy. We know what he stands for. He's one of us."