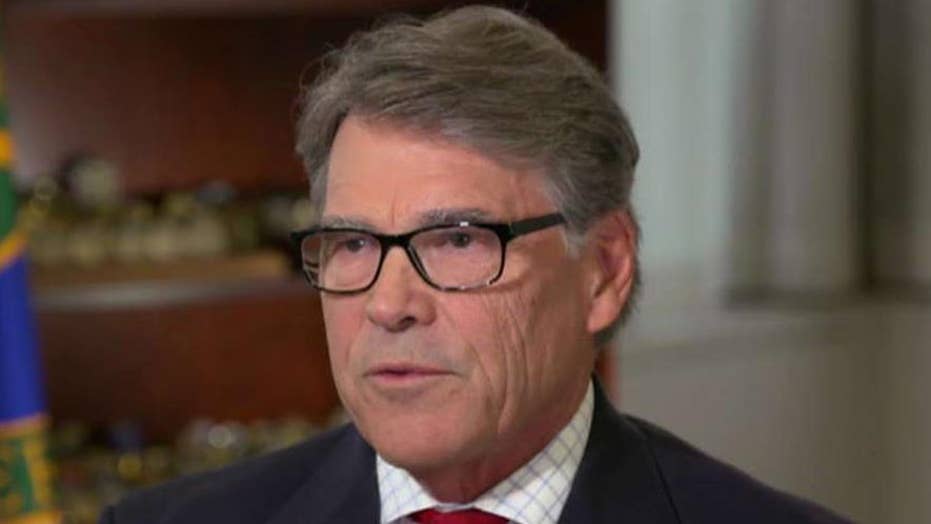 Outgoing Energy Secretary Rick Perry gives his thoughts on the impeachment inquiry hearings during a sit-down with Ed Henry on 'America's News HQ.'

Confirmation of Brouillette, who'd been responsible for day-to-day operations at the Energy Department for two years under Perry, came a day after Perry's resignation became effective.

FILE: Secretary of Energy nominee Dan Brouillette smiles during a Senate hearing on his nomination. (AP )

Perry has said his departure had nothing to do with his energy work in Ukraine for the Trump administration and that he was focused on longstanding U.S. policy to lessen that country's dependence on Russia for fuel. A House impeachment panel is scrutinizing Trump's push for Ukraine to investigate a company employing a son of rival Joe Biden.

Perry has refused to testify before the panel. Some other administration officials who have appeared before impeachment investigators described Perry as one of what the Trump White House allegedly called the "three amigos" — administration figures who consulted with Trump personal attorney Rudy Giuliani, one of the main focuses of the impeachment probe, on Ukraine issues.

Brouillette, a veteran in state and federal energy regulatory matters, easily won bipartisan support since Trump nominated him Nov. 7. He told a Senate committee hearing last month he knew nothing about any of the Ukraine conversations under scrutiny.

However, Sen. Ron Wyden, D-Ore., accused Brouillette of failing to detail what he knows about Perry's meetings with natural gas officials and others in Ukraine. Wyden told the Senate on Monday that Brouillette was waging a "full-court stonewall."

"He has been forthcoming. He has not held anything back," Manchin said.

Perry, a former Texas governor, used his job in part to promote U.S. oil and gas overseas, while also stressing the value of the national research labs and other cutting-edge work overseen by the Energy Department. Republican senators in Brouillette's committee confirmation hearing made clear they expected him to keep using the agency to advocate for U.S. fossil fuels, although Brouillette's first remarks at the hearing stressed the department's research on supercomputers and other scientific efforts.