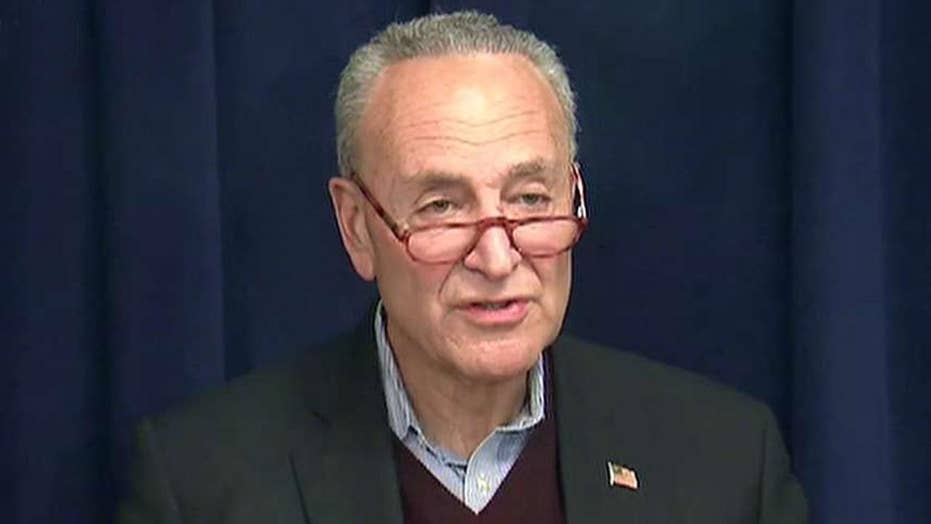 Schumer on impeachment: President Trump is afraid of the truth and probably thinks he's guilty

Senate Minority Leader Chuck Schumer, D-N.Y., vowed Sunday evening to "force votes on witnesses and documents" in the impeachment trial against President Trump starting this week, and suggested that Republicans were engaged in a cover-up to block Democrats from doing so.

During a news conference, Schumer questioned why Senate Majority Leader Mitch McConnell, R-Ky., was "being so secretive about his proposal" to call witnesses, a point of contention for weeks between opposing congressional leaders gearing up to begin hearing arguments as they consider two charges against Trump for obstruction of Congress and abuse of power.

McConnell has vowed to start the trial without making a decision on calling witnesses, following a similar pattern to then-President Bill Clinton's impeachment trial in 1999.

Schumer went on to say Trump was "afraid of the truth," claiming the president knew he was guilty.

"We Democrats aim to get the truth," Schumer said. "Make no mistake about it, we will force votes on witnesses and documents, and it will be up to four republicans to side with the Constitution, to side with our democracy, to side with rule of law, and not side, in blind obeisance, to President Trump and his desire to suppress the truth. Because, in my judgment, he probably thinks he's guilty."

As Schumer addressed reporters in New York, Trump brushed off impeachment and touted his economy and job records.