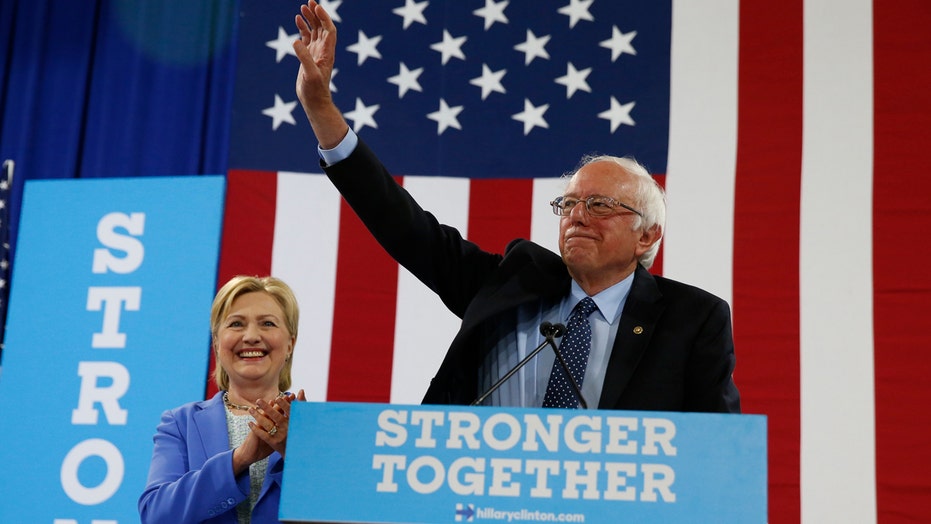 Bernie Sanders on Tuesday delivered his long-awaited endorsement of Democratic primary rival Hillary Clinton -- who in exchange for that support gave the Vermont senator a platform to lay out what amounts to his socialist-inspired vision he expects Clinton to carry and the party to promote.

The Vermont senator spoke at length as he endorsed Clinton and went on to hammer his own campaign agenda that includes Wall Street reform, free college, a higher minimum wage and expanded, government-backed health care.

In turn, Clinton echoed many of Sanders' campaign priorities, completing the embrace of many planks of his agenda that has been in the works for weeks -- notably, on college debt.

"We're going to make college debt-free for all, and help millions of people struggling with existing student debt save thousands of dollars," she said.

She also said, "Wages are just too low for most Americans to get ahead. We need to go big."

The two shared the stage as Sanders declared he’ll “do everything possible to make certain she will be the next president of the United States.”

"Secretary Clinton has won the Democratic nomination," Sanders said on stage with Clinton in New Hampshire. "And I congratulate her for that."

But more broadly, Sanders declared victory in having won "the most progressive platform in the history of the Democratic Party." Clinton and her allies on the platform-writing committee have in recent days embraced several Sanders-backed proposals, a coming together which helped pave the way for Tuesday's endorsement.

Sanders, a self-described democratic socialist, told the crowd that he arrived on stage "not to look back, but to look to the future."

"We started a political revolution, and that revolution continues," Sanders said to loud applause. "We want a government that represents all of us, not just the 1 percent."

However, the Vermont senator had until Tuesday essentially withheld his endorsement to get Clinton to embrace and adopt some of his progressive ideas, including free college tuition and Wall Street reform.

Sanders on Tuesday also touted his 20-plus primary and state wins, while acknowledging "it wasn't enough."

Sanders made the endorsement in New Hampshire, where he defeated Clinton by 22 points in the state’s presidential primary in February.

His endorsement also comes after weeks of negotiations between the Clinton and Sanders campaigns, including the candidates and top staffers meeting in June at a Washington hotel. Their campaigns have since been in frequent contact.

The event, at a high school in Portsmouth, N.H., was also an attempt to project Democratic unity before Republicans formally nominate presumptive presidential nominee Donald Trump next week in Cleveland.

"How much more enjoyable is this election going to be?" Clinton said to the crowd. "Because you know what, we are stronger together. … Thank you for your endorsement.”

Trump tweeted before the endorsement: “I am somewhat surprised that Bernie Sanders was not true to himself and his supporters. They are not happy that he is selling out!”

Clinton has recently campaigned with President Obama and Massachusetts Sen. Elizabeth Warren in recent weeks, warning Democrats of the threat of a Trump presidency.

Clinton last week rolled out proposals on college affordability and access to health care, winning praise from Sanders, and the platform agreed to last weekend in Florida includes many of Sanders' priorities, including a $15 an hour minimum wage.

Recent polls have shown that many Sanders voters plan to back Clinton but have reservations about her honesty.

Sanders has said he will do all he can to prevent Trump from winning the White House and the senator's vouching for Clinton could help her with the independents, liberals and millennials who flocked to his primary campaign.

He saw his longshot bid for the White House quickly catch fire in 2015 at large-scale rallies where he denounced income inequality, the influence of Wall Street and the role of big money in politics.

His campaign was powered by an impressive online fundraising machine that raised more than $200 million and threatened Clinton's once overwhelming lead in the primaries with the help of voters drawn to his anti-establishment message.

Sanders' unruly white hair and glasses was often depicted in campaign offices and on T-shirts and a campaign catch-phrase, "Feel the Bern," marked his rise online. Comedian Larry David portrayed Sanders on "Saturday Night Live" and the senator made an appearance on the show before the New Hampshire