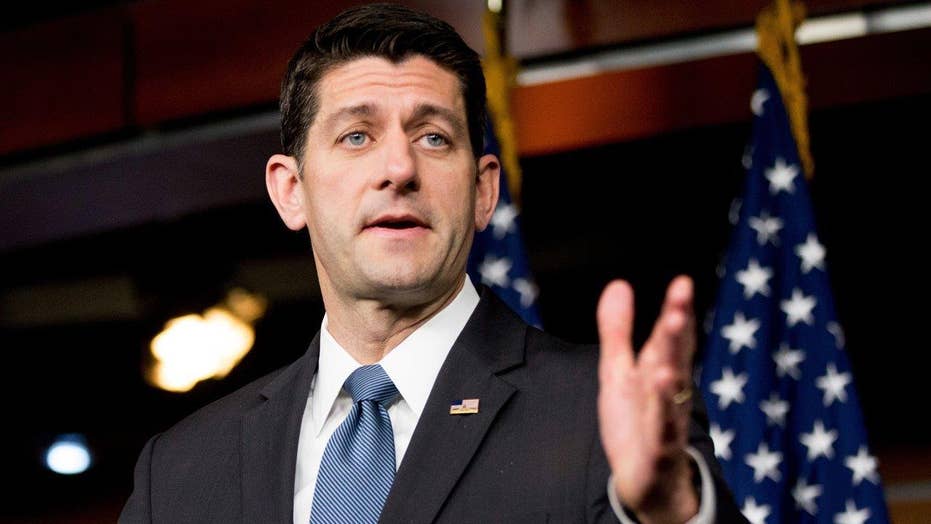 Are Republicans in danger of losing majority in the House?

Republican House Speaker Paul Ryan is taking flak for distancing himself from party presidential nominee Donald Trump but continues to put money into home state Wisconsin that purportedly is available for any GOP candidate on the state ballot in November.

Ryan’s re-election committee, Ryan for Congress, this week transferred $250,000 to the Wisconsin Republican Party, bringing the total he’s given this year to the group to $1 million, a source told Fox News on Thursday.

His primary focus in Wisconsin has been trying to help his party keep the House seat of retiring Rep. Reid Ribble and get GOP Sen. Ron Johnson reelected -- in one of a handful of down-to-the-wire races that will determine whether Republicans keep control of the Senate.

But the money -- intended to help with voter outreach and other ground-game efforts -- is for all GOP candidates running in Wisconsin, which means the Trump campaign will have access. It appears to try to make clear that Ryan, despite an earlier suggestion to the contrary, in fact has not conceded the White House race will go to Democratic nominee Hillary Clinton.

Ryan, a Roman Catholic, has had a tenuous political relationship with Trump at least since he became the presumptive nominee this spring.

“Paul Ryan is doing a great job in the face of an awful situation,” Republican strategist Rob Carter said Thursday. “He’s in a tough spot with Trump. But soon this will all be over.”

Ryan said in May, “I’m just not there yet,” after Trump had earlier called for a temporary ban on Muslim immigrants and the mass deportation of illegal immigrants and suggested his opposition to free trade.

Ryan, seeking a 10th House term in November, endorsed Trump several weeks later. But he essentially dropped the first-time candidate and wealthy businessman earlier this month, following the release of a 2005 audiotape in which Trump is heard boasting about kissing and groping women without invitation.

Ryan, who became House speaker in fall 2015, said a day after the tape’s Oct. 8 release that he would neither defend Trump nor campaign for him.

Trump expectedly hammered Ryan, the former 2012 GOP vice-presidential nominee, on Twitter, saying he’s done “zilch” as the top Capitol Hill Republican and that he should focus more on “balancing the budget, jobs and illegal immigration and not waste his time on fighting Republican nominee.”

That weekend, Ryan faced a smattering of boos at a GOP unity rally in Wisconsin, from which Trump had been disinvited.

On his Monday morning conference call with rank-and-file House Republicans, some expressed dissatisfaction about Ryan appearing to have thrown in the towel, four weeks before Election Day.

And the fallout has hurt his status as a leader of the Republican Party, according to a Bloomberg Politics poll released last Friday.

Still, Ryan purportedly remains in high demand on campaign trails across the country, as Republicans also try to keep their 30-seat House majority, with other GOP lawmakers also trying to figure out how to deal with Trump.

Already this month, Ryan has attended roughly 65 events across 17 states in support of GOP House incumbents and challengers, with 12 events scheduled next week in California. And he has purportedly raised $50 million so far this year, with more than half going to the National Republican Congressional Committee, the source also said.

On Friday, Ryan will be in Green Bay, Wis., to help Mike Gallagher, a Marine running for Ribble's seat in the state’s 8th Congressional District.

“Mike Gallagher will be part of the next generation of conservative leaders,” Ryan said recently. “As a proud U.S. Marine, Mike understands precisely what it takes to serve our nation and he knows what is required to uphold and defend our freedoms.”