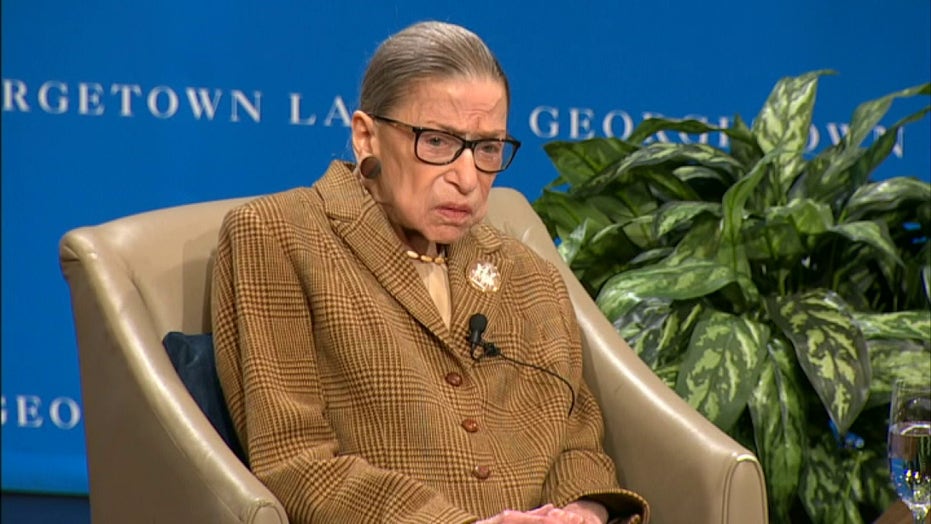 Ruth Bader Ginsburg: The 19th amendment was a miracle

Supreme Court Justice Ruth Bader Ginsburg questioned calls to add the Equal Rights Amendment to the Constitution amid renewed speculation, instead suggesting the U.S. start over with the ratification process.

Ginsburg said that one of her life’s goals -- enshrining prohibition of gender-based discrimination in the Constitution -- should be put on hold.

"I would like to see a new beginning," Ginsburg, 86, told moderator Judge M. Margaret McKeown, of the 9th Circuit Court of Appeals, at an event at Georgetown University’s law school. "I'd like it to start over."

The Equal Rights Amendment, which stipulates “equality of rights under the law shall not be denied or abridged by the United States or by any state on account of sex,” was introduced in the 1920s and passed by Congress in 1972. But the deadline to ratify the measure as a constitutional amendment expired in 1982.

Ginsburg's comments formed an unlikely alliance between the Supreme Court justice who has been pivotal to the feminist movement and conservatives who believe the ERA is a threat to their stances on abortion and transgender rights. Still, Ginsburg assured that she would like to see equal rights spelled out in the Constitution.

"I would like to show my granddaughters that the equal citizenship stature of men and women is a fundamental human right," she said.

However without Ginsburg’s vote, it’s unlikely that five members of the Supreme Court will ratify the ERA, without a complete do-over of the ratification process, sending it through Congress again.

Three-fourths of U.S. states, or 38 in total, are required to amend the Constitution. "There’s too much controversy about latecomers,” said Ginsburg. “Plus, a number of states have withdrawn their ratification. So, if you count a latecomer on the plus side, how can you disregard states that said, 'We’ve changed our minds?'

Ginsburg’s comments seemed to back a statement the Justice Department released after Virginia ratified the ERA in January, pointing out that since the deadline to pass the amendment lapsed decades ago, it was too late for states to be added to the ratification list.

“Because three-fourths of the state legislatures did not ratify before the deadline that Congress imposed, the Equal Rights Amendment has failed of adoption and is no longer pending before the States,” Assistant Attorney General Steven Engel wrote.

As a result, multiple state attorneys general filed suit to force the U.S. to ratify the ERA.The attorneys general argue that the deadline passed by Congress is not binding; time limitation was not included in the text of the article that was sent to the states for consideration. They also said that the Constitution does not explicitly give Congress the power to set a timeline for amendment ratification. The added that the last amendment added in 1992 -- the 27th Amendment limiting the ability of members of Congress to give themselves pay raises – took more than 200 years to be ratified by 38 states.