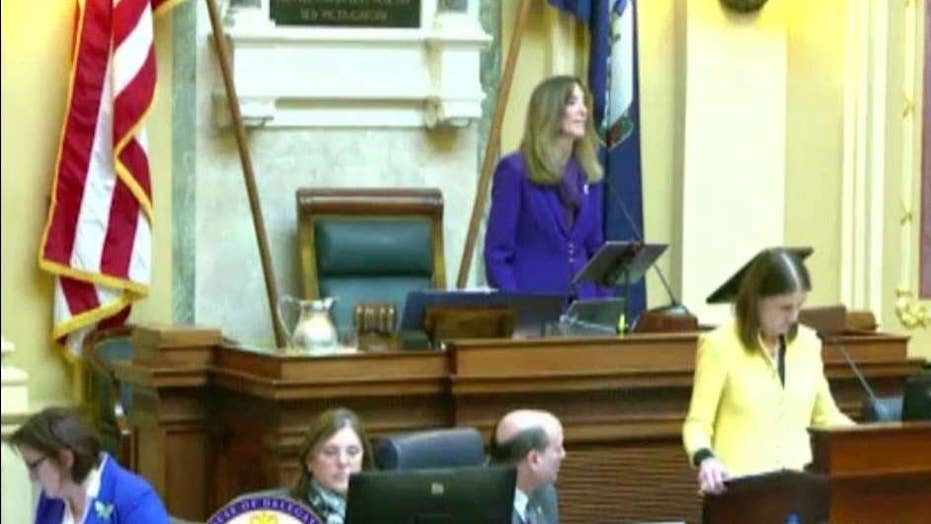 Virginia becomes the 38th state to ratify the Equal Rights Amendment, after both state legislatures voted in favor of the measure, in an effort to have it added to the U.S. Constitution; Fox News correspondent David Spunt reports.

The attorneys general in Virginia, Illinois and Nevada on Thursday filed a federal lawsuit to force a government official to recognize Virginia's vote to ratify the Equal Rights Amendment and add it to the U.S. Constitution.

The lawsuit filed by Virginia Attorney General Mark Herring, Nevada Attorney General Aaron Ford and Illinois Attorney General Kwame Raoul against the archivist of the United States, David Ferriero, comes after the National Archives and Records Administration said this week that Ferriero would "take no action to certify the adoption of the Equal Rights Amendment."

The lawsuit challenges a Department of Justice opinion that says the ERA can no longer be ratified because its deadline expired several decades ago.

"We conclude that Congress had the constitutional authority to impose a deadline on the ratification of the ERA and, because that deadline has expired, the ERA Resolution is no longer pending before the States," Assistant Attorney General Steven Engel wrote. "Congress may not revive a proposed amendment after the deadline has expired."

The memo from the Office of Legal Counsel was made public on the first day of Virginia's legislative session. Virginia's General Assembly finalized its passage of the amendment earlier this week, becoming the 38th state to do so. Nevada ratified the amendment in 2017 while Illinois followed suit a year later.

Thirty-eight states are required to pass a constitutional amendment. Thirty-five had before the 1982 deadline.

The amendment holds that "equality of rights under the law shall not be denied or abridged by the United States or by any state on account of sex."

In Thursday's lawsuit, the attorneys general argue that U.S. laws do not give the archivist the power to decide whether to certify an amendment. They contend the archivist's duty to certify the amendment is "mandatory and purely ministerial."

"After generations of effort, the women of this country are entitled to their rightful place in the Constitution. This Court should compel the Archivist to carry out his statutory duty of recognizing the complete and final adoption of the Equal Rights Amendment," the lawsuit said.

The attorneys general also argue that the deadline passed by Congress is not binding; the time limitation was not included in the text of the article that was sent to he states for consideration. They also say the U.S. Constitution doesn't explicitly give Congress the power to set a timeline for states to ratify an amendment. They added that the last amendment to be added in 1992 – the 27th Amendment limiting the ability of members of Congress to give themselves pay raises – took more than 200 years to be ratified by 38 states.

The attorneys general are asking the court to force the archivist to certify that the amendment has passed and is now the 28th Amendment to the U.S. Constitution.

"Anybody who wants to amend our nation's most important foundational document needs to follow the established rules and procedures, not take shortcuts and then bully and bulldoze until they get their way," he said in a statement to Fox News.

Conservatives also hailed the DOJ's move as a major victory, saying the ERA is a threat to their stances on abortion and transgender rights.