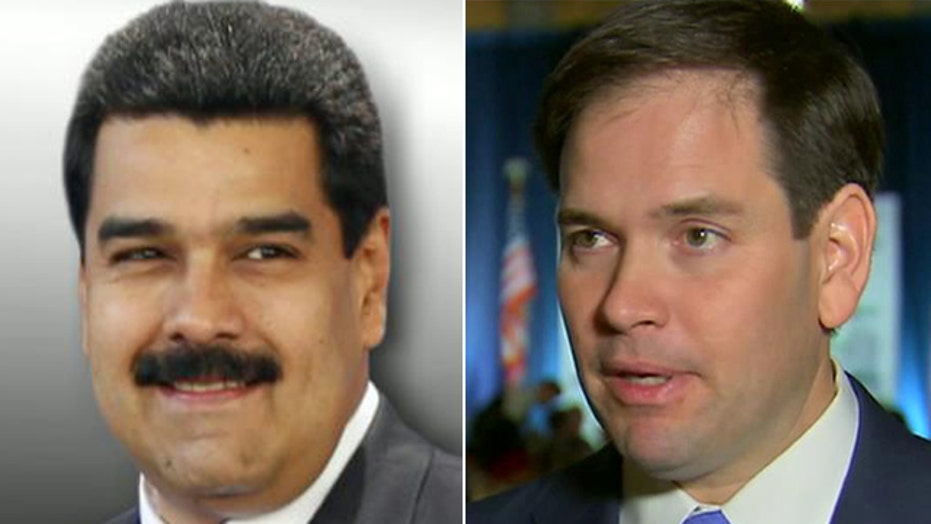 Sen. Rubio reacts to being banned by Maduro

Sen. Marco Rubio, R-Fla., responded Saturday to his inclusion on a list of U.S. politicians banned from Venezuela by President Nicolas Maduro, telling Fox News that such a ban is a “badge of honor.”

Rubio’s ban comes as part of a range of diplomatic sanctions announced by Maduro that includes limiting the number of U.S. diplomats and requiring any Americans visiting the country to obtain a tourist visa.

Rubio has been critical of Maduro's policies and on Friday called the country a “human rights catastrophe” on the floor of the U.S. Senate.

“I love the people of Venezuela. I want that country to have freedom. I want it to have human rights and to be banned by a dictator like Nicolas Maduro is, to me, a badge of honor,” Rubio told Fox News Saturday.

Earlier this month Maduro accused the U.S. of working with opposition forces to stage a coup, claims that Washington has rejected.

The U.S. State Department declined to comment on the new restrictions, which come after the U.S. recently imposed a travel ban on a list of top Venezuelan officials accused of human rights violations.

Americans have been staying away from Venezuela as crime has soared, exchange rates have become difficult to navigate and Maduro has stepped up attacks on the U.S. government. Just 36,000 U.S. citizens visited in the first nine months of 2014, about half the number that visited two years earlier, according to Venezuela Tourism Ministry data. Overall, some 950,000 foreigners visited Venezuela last year.