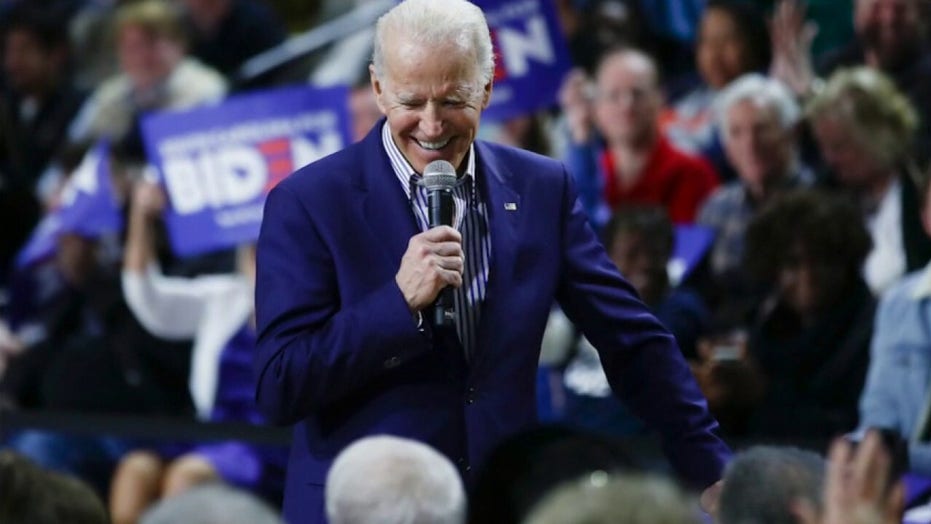 Will the election be a referendum on how Trump handles coronavirus?

Democrats have been playing offense so far this year as they try to regain the majority in the Senate for the first time in six years.

But with five months to go until November’s general election, the Republicans are starting to return fire as they defend 23 of the 35 Senate seats up for grabs this year.

2020 FIGHT FOR CONTROL OF THE SENATE INTENSIFIES

This week the National Republican Senatorial Committee (NRSC) – which is the campaign arm of the Senate Republicans – kicked off a major ad blitz in three key races that could determine which party controls the chamber next year. And the NRSC says it will be on the airwaves in three more crucial contests by next month.

But as they try to keep their 53-47 majority in the Senate, the NRSC’s saying enough is enough and is taking aim at some of the Democratic challengers and incumbents.

"Democrats have skated by without much scrutiny for the last year. There's plenty of skeletons in their closet, and a bright light is about to shine on all of them,” NRSC communications director Jesse Hunt told Fox News.

And in Michigan – one of few states where Republicans think they have a good chance of flipping a blue seat to red – the narrator in a new ad charges that Democratic “Sen. Gary Peters and his family invested in companies that outsourced nearly 1,000 Michigan jobs to foreign countries.”

The spots are part of a $33 million summer ad buy the committee announced earlier this year.

And Fox News got a first look at new websites set up by the NRSC that target two of the three Democrats. They’re titled “Profiteering Peters” and “Gambling on Gideon.”

In addition to the NRSC ad blitz, One Nation – an outside group aligned with Senate Majority Leader Mitch McConnell – announced this week that they’ll spend more than $27 million to air TV and radio ads in six key Senate races this summer.

Republicans hope to turn the tide – or least try to level the playing field – in a Senate cycle that’s seen them outspent. Democrats have been riding a wave of momentum, thanks to strong fundraising and successful recruits.

A veteran GOP strategist said the timing of the new push is critical.

“There’s no question that in several key states like Maine, Democratic outside groups have been spending early and have been having the playing field largely to themselves. So it was a very smart decision by the NRSC to go up earlier than the committee has historically done in order to counter that spending and really start defining the Democratic candidates,” Brian Walsh told Fox News.

“In some of these states, like Maine, North Carolina, and Iowa, the Democrats are relatively unknown and so it’s important to define them early. You can’t afford to wait for the fall anymore,” added Walsh, a former NRSC communications director and former senior adviser to GOP Sen. John Cornyn of Texas and a veteran of numerous Senate, congressional and gubernatorial campaigns.

The NRSC push comes amid troubling poll numbers for Republicans in some of the most high-profile races. Among the latest: a Fox News Poll in Arizona released Wednesday that indicated Kelly topping McSally by 50-37 percent, a 13-point margin.

The Democratic Senatorial Campaign Committee termed their rival’s move a sign of desperation.

“Washington Republicans are panicking because their weak incumbents cannot run on their unpopular records and are resorting to misleading attacks to distract from voting to gut pre-existing conditions or allowing the White House to raid funds for local military construction projects in their states,” DSCC spokesperson Stewart Boss told Fox News.

And he emphasized that “Democrats are focused on the issues that voters care about and reporting record-breaking grassroots support, which is exactly how we’ve moved so many races in our direction and put Republicans on defense across the Senate map.”

With the Senate Majority PAC – the top outside group backing Senate Democratic incumbents and candidates – shelling out big bucks to run ads so far this year and more on the way, the DSCC’s saved their firepower. They’ve announced they’ll be spending more than $30 million to reserve ad time in four key races – Arizona, Iowa, Montana, and North Carolina – beginning in the autumn.

And the Senate Majority PAC announced in the early spring that they’d spend at least $70 million to reserve air time  to run ads this fall in five key Senate races.