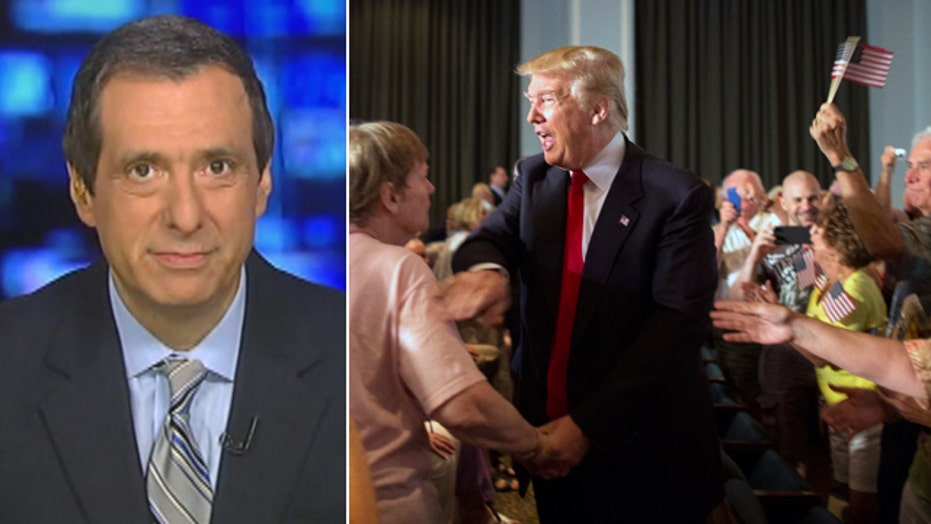 Kurtz: Drowned out by The Donald

That sound you hear is Republican candidates trying to break through the static as the final days tick down in the elimination contest for the Fox News debate.

It’s Carly Fiorina talking about the Planned Parenthood videos on Fox, saying “there are plenty of pro-choice women who are horrified by this as they should be. The fact that these officials can sit here swilling their wine, eating their salad, laughing over getting a Lamborghini and talk about specimens of fetal tissue, I find horrifying and the majority of Americans do as well."

It’s Chris Christie declaring on Fox that he will ban marijuana in all 50 states and “if you’re getting high in Colorado today, enjoy it. As of January 2017, I will enforce the federal laws.”

It’s Rick Perry insisting in a speech that Donald Trump’s candidacy is “a cancer on conservatism, and it must be clearly diagnosed, excised and discarded.”

It’s Mike Huckabee telling Breitbart News that President Obama “is so naive that he would trust the Iranians. By doing so, he will take the Israelis and march them to the door of the oven.”

It’s not that these candidates don’t sincerely believe what they’re saying. It’s that they’re all trying to finish in the top 10, determined by an average of polls, that will put them on the Cleveland stage for Fox’s prime-time debate next Thursday. (The network announced yesterday that there will be no 1 percent threshold for the undercard debate, airing at 5 p.m., clearing the way for all the candidates who miss the cutoff.)

Huckabee will likely make the debate. But the former Arkansas governor knew he was being incendiary by invoking the Holocaust, specifically by tying it to the president and saying Obama will be marching the Israelis to the ovens. And that got Huckabee booked on a bunch of shows, where he steadfastly refused to back down and tried to pivot from the Holocaust reference to his criticism of the deal with Iran.

The net result: Traffic to Huckabee’s website surged by 100 percent.

The scramble to make the Fox debate is huuuugely complicated by Trump’s dominance of the coverage. That’s why you see Lindsey Graham torching his cell phone (after The Donald gave out the number) and Perry focusing his campaign on the awfulness of Trump.

With Trump slamming just about everyone—opponents, NBC, Univision, the Des Moines Register, the Daily Beast, illegal Mexican immigrants—the decibel level is such that his GOP rivals simply have to shout louder.

Not that we needed any numeric proof, but media analyst Andrew Tyndall has found that the Big Three network newscasts focused on Trump for 60 of the 114 minutes they devoted to the campaign from the beginning of June through the end of last week. The runner-up was Jeb Bush, with 15 minutes. And if you don’t count her email controversy, Hillary Clinton got all of 5 minutes.

Bush, by the way, is one candidate who is not ratcheting up his rhetoric in this Trumpian environment, sticking to what he calls his “tortoise” approach.

The other nine Republicans on stage will face a major challenge if Trump goes off on them, or just is the loudest voice in the debate.

He added this caveat: “I know this. No matter how good I am, the press would say I wasn't, because the press is very dishonest.”

My own guess is that Trump will dial it down a bit—not in terms of bombastic approach to the issues, but to the other candidates, unless he is sharply attacked. He’ll accuse politicians of being all talk and no action, but probably not insult those standing on the stage as losers and idiots. His biggest challenge will be curbing his tendency to ramble and deliver answers in 30- and 60-second bursts.

But the temptation for most of the other Republicans to create a moment by whacking The Donald may be irresistible.

For now, though, the obstacle for much of the field is just to make it to the big stage.