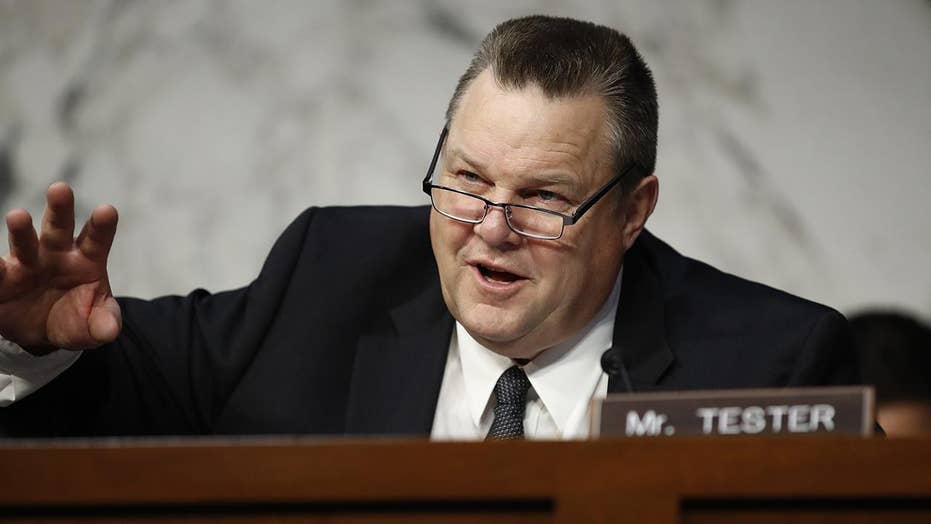 GOP looks at Montana as a possible Senate seat pickup after the incumbent Democrat has provoked the wrath of President Trump; correspondent Dan Springer reports Helena.

Four candidates are vying for the Republican nomination to take on Montana Sen. Jon Tester, an endangered incumbent Democrat, in the fall -- and President Trump’s effect on the Republican Party is showing among them.

Combat veteran Troy Downing, Judge Russ Fagg, state Sen. Albert Olszewski and state auditor Matt Rosendale have all thrown their hats into the ring for the Republican nomination for Senate. And although Tester, the incumbent, has already raised a lot of money for the election, whoever emerges from this group of men stands a good chance in the general election, Dr. Robert Saldin, a University of Montana political science professor told Fox News.

Fox News’ considers the Montana Senate race to be one of eight toss ups in the 2018 midterm elections.

A look at the Republican candidates

While there hasn’t been much polling ahead of the June 5 primary election, Rosendale, 57, has emerged as a potential frontrunner, Dr. David C.W. Parker, a Montana State University political science professor, told Fox News. Rosendale has the endorsement of Republican Sens. Rand Paul, Mike Lee and Ted Cruz. Like Paul, Rosendale bills himself as a libertarian-leaning candidate.

Rosendale, former majority leader in the state Senate, was elected as Montana’s state auditor in 2016.

Fagg is a fourth-generation Montanan with some name recognition, as his father was involved with local politics as well, Parker said. Fagg is genteel and someone who would be difficult to attack during debates, Parker said, but he has “demonstrated some aggressiveness in this primary.”

But Fagg has a long judicial record, and opponents could point to a case to fit an argument that he isn’t tough on crime.

Olszewski is “somebody who could be a very attractive candidate,” Parker said. An Air Force veteran and father to six, Olszewski was first elected to the state legislature in 2014 as a state representative. Now, he’s a state senator.

“He’s well-regarded among Republicans in the know and in the party, but he’s had limited exposure to the electorate,” Parker said, noting that Olszewski hasn’t run television or radio ads like his GOP opponents.

A businessman, Downing founded a tech company that eventually merged with Yahoo. After 9/11, Downing joined the Air Force and served in Afghanistan. His work with veterans, too, has made him a potential dark horse candidate, Parker said.

TRUMP CALLS ON TESTER TO RESIGN OVER RONNY JACKSON ALLEGATIONS

But Downing isn’t originally from Montana, Parker pointed out. And his home in Big Sky, Montana, where the private Yellowstone Club ski resort is, stands in stark contrast to the more rural Montanans.

Downing has the support of former national security adviser Michael Flynn and Trump’s children. He’s also “the one who looks most Trumpian” with his business credentials.

“If there’s a Trump guy, it’s him,” Parker said of Downing.

“It’s all been a competition to see who can be the most aligned with Trump,” Saldin said. “It’s a reflection of where these candidates think the Republican Party is in Montana.”

Even Fagg, who is considered a favorite among the more establishment Republicans in Montana, has tacked a little more in the direction of Trump, Saldin said, pointing to ads that have been deemed “aggressive."

Trump won Montana by about 56 percent in 2016. In comparison, 2008 Republican nominee John McCain took the state with about 50 percent.

“It’s all been a competition to see who can be the most aligned with Trump,” Saldin said. “It’s a reflection of where these candidates think the Republican Party is in Montana.”

It’s no secret that the four Republican candidates lack some of the perks that come with name recognition. In fact, the “best two candidates” for beating Tester aren’t even running in this election, several political scientists in the state have said.

Ryan Zinke, a former U.S. congressman, joined Trump’s Cabinet when he was appointed secretary of the Interior Department last year. And the state’s attorney general, Tim Fox, decided to forgo the race, presumably to run for governor, Saldin said.

But even without that star power, the four candidates still stand a chance because of something next to their name: Republican.

“Anytime you’re running as a Republican in Montana statewide, you’ve got a shot,” Saldin said. “I don’t think it’s a foregone conclusion that Tester wins this.”

A look at Tester

Tester, 61, is a more conservative Democrat who has already emphasized his record of voting for more than a dozen bills signed into law by Trump in his first television ad. In an age of increasingly polarizing politics, Tester’s 30-second spot didn’t critique the president.

Whoever wins the Republican primary needs to tap into what made Trump so successful in rural areas during the 2016 election, such as appealing to voters who believe politicians aren’t “speaking to me,” Parker said. The Republican candidate can “embrace the idea of the perception of left behind rural voters and speak to that.”

“For Republicans to win the general, they need somebody who can kind of stem the flow of rural voters [siding with Democrats or not voting at all] and keep them in the Republicans’ column,” Parker said. “Candidates need to be making inroads in suburban areas -- pick off suburban voters and be attractive to rural voters as well.”

Trump went after Tester earlier this year during the kerfuffle over his pick to lead the Veterans Affairs Department. Adm. Ronny Jackson, who was the president’s physician, withdrew his name from consideration for the Cabinet post following allegations about his prescription-drug practices and use of alcohol. Jackson was also accused of wrecking a government vehicle while intoxicated.

“Candidates need to be making inroads in suburban areas -- pick off suburban voters and be attractive to rural voters as well.”

The allegations were collected by Tester’s office; he is the top Democrat on the Senate Veteran Affairs Committee.

The White House disputed the accusations, and Trump called for Tester’s resignation in April.

“The great people of Montana will not stand for this kind of slander when talking of a great human being,” Trump said in a series of tweets. “Admiral Jackson is the kind of man that those in Montana would respect and admire, and now, for no reason whatsoever, his reputation has been shattered. Not fair, Tester!”

Trump’s attack on Tester could hurt his chances in the fall.

“I think that’s the one thing that’s gone wrong for Tester,” Saldin said of Trump’s criticisms. “So much has gone right for Tester. The thing with Jackson, it does threaten to hurt him, especially if Trump follows up and comes out here to campaign directly against him.”

Saldin said the Tester campaign needed to “keep Trump at arm’s length and just emphasis the areas in which Tester and Trump have been able to work together, especially on veterans’ issues.”

About 87,000 veterans live in Montana, according to the U.S. Census Bureau. Along with Alaska and Maine, Montana is considered to have the most veterans per capita living in the state.

On the other hand, Parker has argued Trump’s attacks might actually help Tester’s campaign. Tester is considered a strong advocate for veterans in Montana, Parker wrote for The Washington Post, and his fight with Trump over a beleaguered pick to lead the already embattled veterans’ agency could further prove his dedication to those who served the country.

“The way Democrats win in Montana,” Parker said, is by having candidates who are “personable and well-liked and are pretty solid on things like guns and social issues. They peel off enough rural voters who like that person individually more than the Republican alternative.”