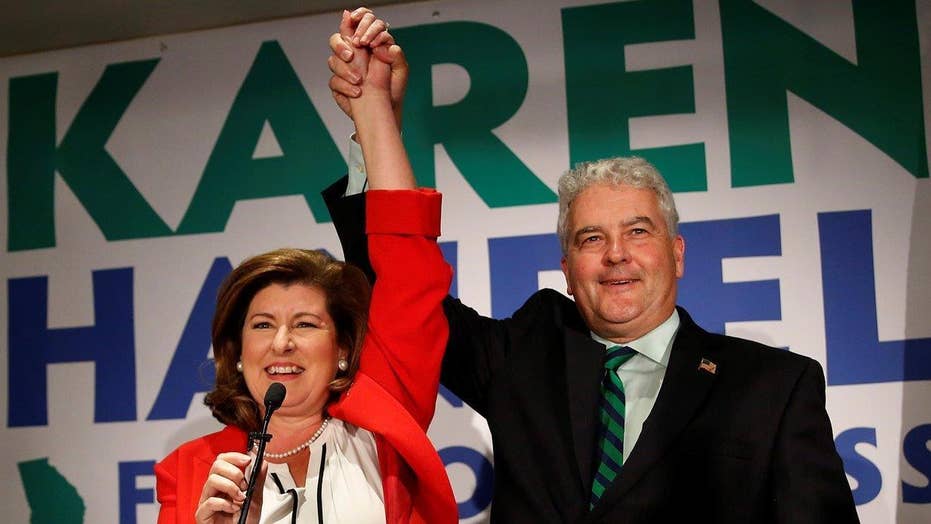 Where to now for Democrats? Reaction and analysis from the 'Special Report' All-Star panel

With all precincts reporting, Handel, a former Georgia secretary of state, led Ossoff 52 percent to 48 percent -- a margin of nearly 11,000 votes out of more than 250,000 ballots cast.

The race smashed fundraising records for a House contest -- with both campaigns and outside groups combining to spend a record $50 million.

Ossoff’s defeat was another setback for Democrats hoping to capitalize on Trump’s low approval ratings to win a long-standing Republican seat.

It was the party’s fourth straight defeat this year in attempts to win a Republican seat and take the momentum into the 2018 midterms. They now must win 24 GOP House seats to retake control of the chamber next year.

“This race was going to require all hands on deck, and that’s what we had,” Handel said at her victory party. “Tonight’s victory is for you. It’s for every citizen in the 6th (Congressional) District.”

To be sure, the contest was close since Handel and Ossoff were the top finishers in April's first balloting, which sent them to Tuesday’s runoff.

Ossoff lead by nearly 5 percentage points as recently as June 12, before the race deadlocked in the final days, according to the RealClearPolitics.com polls average.

The 30-year-old Ossoff, whose campaign was hurt by revelations that he didn’t live in the suburban Atlanta district, thanked his campaign team and voters in a short concession speech.

“Thank you for the most extraordinary process that I have ever been a part of,” Ossoff said. “The fight goes on. Hope is still alive.”

The House seat has been occupied by Republicans since 1979. GOP Rep. Tom Price gave up the seat in February to become Health and Human Services secretary.

President Trump didn’t campaign in Georgia for Handel. But he attacked Ossoff on Twitter for living outside the district and warned voters that he would increase taxes and be soft on national security.

Handel supporters chanted “Trump, Trump, Trump” at her victory party. And the president tweeted his own message of congratulations.

House Speaker Paul Ryan, R-Wis., also congratulated Handel, saying, “Karen is all business. I’ve campaigned with her, and I know how eager she is to get to work. I’m excited to have her as a partner in the House.”

Ossoff tried to thread the needle in the conservative-leaning Georgia district by vowing to cut taxes for small businesses, while championing equal rights for women and minorities, which earned him the support of civil rights icon and Georgia Democratic Rep. John Lewis.

Handel touted her experience as a state and local elected official and argued that outside forces were trying to buy a win.

Voters “are not interested in Hollywood and California coming in and buying this seat,” she said Tuesday morning on Fox News’ “Fox & Friends.”

In terms of individual donations, Ossoff vastly outpaced Handel, with nearly $24 million to her $4.5 million. An Atlanta Journal-Constitution analysis showed just 3.5 percent of Ossoff’s donations between the end of March and May came from Georgia.

Still, Handel also benefited from outside spending, though most didn’t go directly to her campaign.

Groups like the Congressional Leadership Fund, a political action committee backed by Ryan, have spent millions on her behalf.

Also on Tuesday, Republicans held onto the House seat in South Carolina that was vacated in February by Mick Mulvaney so he could become the White House budget director. Millionaire developer Ralph Norman, the Republican, defeated former Goldman Sachs tax adviser Archie Parnell, the Democrat, in a closer-than-expected contest.

The other two special-election races this year in which Democrats failed to win a GOP House seat were in Kansas and Montana.

In Kansas, Republicans held onto the seat of Mike Pompeo, now the CIA director, and they kept the Montana seat of Ryan Zinke, who became Trump’s secretary of Interior.

Democrats have one last outside chance to win a GOP House seat, Rep. Jason Chaffetz’s in a conservative Utah. The special election is on August 15. Democrats won one special House election this year, holding onto the California seat vacated by Xavier Becerra.

While Republicans have held the Georgia seat since former House Speaker Newt Gingrich took it from Democrats nearly four decades ago, the district does not appear as conservative as in years past.

The race attracted national attention and record money, but Georgia voters also took a big interest in the outcome.