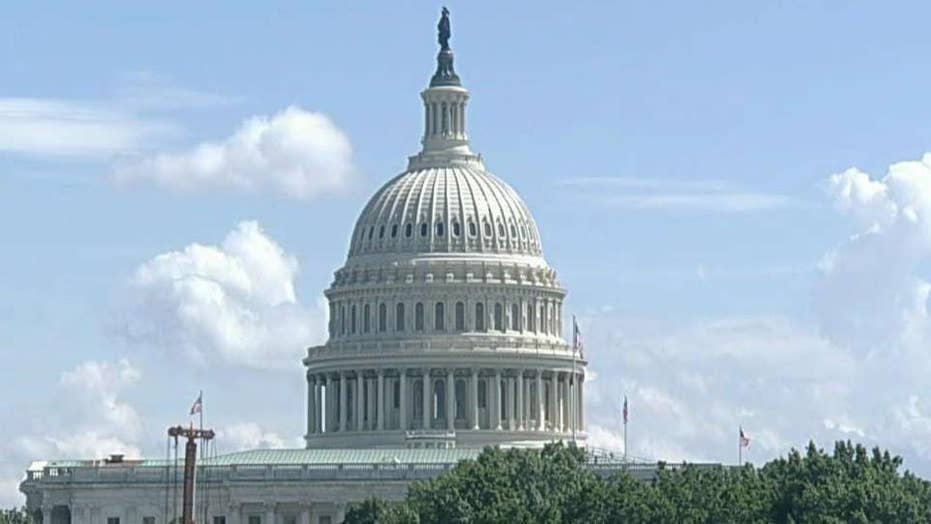 Everyone knew weeks ago that the New Orleans Pelicans would claim Duke star Zion Williamson with the first pick in the NBA Draft.

If only we could enjoy such lucidity on Capitol Hill.

White House Chief of Staff Mick Mulvaney, Treasury Secretary Steve Mnuchin and others ventured to the office of House Speaker Nancy Pelosi, D-Calif., last week with the goal of establishing annual spending figures for the next two years, avoiding government shutdowns and raising the debt ceiling.

Just before the confab, one senior source close to the talks expressed confidence.

"We're going to get it done," said the source, who asked not to be identified. "We have to."

69 senators vote down Republican Sen. Rand Paul's 'Pennies Plan' to balance the budget in 5 years and cut spending by $11 trillion.

The big concern for Republicans is that failure to raise the spending caps hits the military extraordinarily hard and makes it a challenge to reach an accord on any of the spending bills.

"You have to raise the caps. That would undercut everything the President has tried to do with the military," said Sen. Lindsey Graham, R-S.C.

Congressional leaders and key appropriators also huddled in mid-May with Mulvaney, Mnuchin and others. In fact, Senate Majority Leader Mitch McConnell, R-Ky., suggested the sides were close to an agreement then.

"Our hope is to make a deal before the day is over," McConnell said last month.

Then came the best sign that things were going well. Three hours after one meeting, the administration team returned to the Capitol for a matinee round of negotiations. Things like that don't usually happen in Washington unless the talks are getting somewhere. Another positive sign was that people were mum. But the day finished with no deal, despite McConnell's optimism.

Everything spilled into the ditch the following day. Congressional Democratic leaders were scheduled to visit the White House to meet with the President on infrastructure. President Trump and top lawmakers appeared to have forged an infrastructure pact earlier in the spring. But then Trump browbeat Pelosi for accusing him of a "cover-up" and abruptly adjourned the council before it could really get started.

Granted, the infrastructure discussions were on a separate track from the spending caps-debt ceiling negotiations. But everything in Washington hinges on relationships and the political climate. If you're not getting along on infrastructure or House Democratic investigations of the Trump Administration, it's doubtful you can miraculously pivot, sing "Kumbaya" and produce a fiscal pact on spending and the debt limit.

So, no one met again until last week. And the only thing that could be agreed on was that all parties were in disagreement.

Pelosi on Trump: If the goods are there, you must impeach

"In the spirit of cooperation, our first priority is to raise the debt ceiling," said Mnuchin outside the Speaker’s Office last week. "Everyone agreed we would not make the debt ceiling subject to spending."

Standing next to Mnuchin, Mulvaney declared that the administration scored a win in the meeting: a change in Pelosi's position on the sequencing of the talks.

Pelosi suggested a week-and-a-half ago that an agreement to lift mandatory spending caps, known as sequestration, was her primary demand.

"When we lift the caps, then we can talk about lifting the debt ceiling. But that would have to come second or simultaneous. But not before lifting the caps," Pelosi said.

"Do we have to waste time on Mick Mulvaney's characterization of my remarks?" retorted an agitated Pelosi. "Mulvaney's one of the people who shut down government because they didn't want to lift the debt ceiling. And so he has no credibility on the subject whatsoever."

President Donald Trump says he will impose tariffs on all goods from Mexico until the country stops the flow of undocumented migrants from Central America who cross its territory and enter the United States; insight from acting White House chief of staff Mick Mulvaney.

That conflates two issues. As a Republican Congressman from South Carolina, Mulvaney opposed some bills to fund the government. He voted against a major package in 2011 to raise the debt ceiling and create the very spending caps which negotiators are now trying to terminate. The latter package had nothing to do with keeping the government open.

Mulvaney remains central to the talks. But Pelosi isn’t the only Democratic leader who has reservations about the President’s Acting Chief of Staff.

One senior source familiar with the discussions tells Fox that Mulvaney "p---ed everybody off" during last week's meeting. Some Democratic negotiators told Mnuchin they'd prefer to deal with him instead – and asked he leave Mulvaney back at the White House.

However, if there is no agreement on the spending caps, the administration wants a year-long Continuing Resolution, or CR, to fund the government. By its nature, CRs simply renew current funding at existing levels. There would also be a one-year suspension of the debt ceiling. Democrats oppose the proposal.

After the meeting in the Speaker's Office, Mulvaney accused Democrats of trying to extort additional money for non-defense programs. The military figure always dwarfs the non-defense number, since the Pentagon receives more than half of all discretionary dollars allotted by Congress these days. President Trump requested $750 billion for the military. Democrats don't oppose increasing defense spending – if they secure a significant increase for everything else.

"Everybody is trying to raise the caps," said Mulvaney.

After the meeting on Capitol Hill, Mulvaney argued that Democrats wanted to spend $639 billion on non-defense programs. Now it's $647 billion.

"So you tell me if things are moving in the right direction," said Mulvaney.

The Democratic number did grow. But Democrats gave themselves the agility to increase the size of the non-defense pie in a budget resolution the House "deemed" to be approved earlier this year. The additional $8 billion is for the Census and for IRS enforcement efforts. House Budget Committee Chairman John Yarmuth, D-Ky., announced the hike in a letter to Pelosi last week.

Hoyer noted that Democrats were ready to give Republicans $733 billion for defense and suggested that Mulvaney and other Republicans were still pushing for tens of billions of additional dollars for a special defense spending fund: "Overseas Contingency Operations" or "OCO." OCO is real money which goes to the Pentagon. But it doesn't count against the spending caps.

PELOSI FLEXES MUSCLE OVER PARTY IN IMPEACHMENT DEBATE, BUT 'DAM' COULD COLLAPSE

"That's fiscally totally irresponsible and a game," said Hoyer. "[Mulvaney] wants maximum pressure in September to squeeze down as hard as he can on non-defense discretionary spending."

The lack of progress in the negotiations is a problem. A failure to raise the debt ceiling later this summer could spark a market shock. Lawmakers are still stung from what unfolded in 2011 as Congress and the Obama Administration struggled to lift the debt limit.

When asked what the administration wants in a debt ceiling increase, White House Director of Legislative Affairs Eric Ueland replied "as long as we can get. As early as we can get."

But the hour is growing late. In fact, some argue that the window for a caps agreement is closed altogether. The debt ceiling issue could prove so all-consuming that there’s no bandwidth for a caps package. There was a rush to get a deal before the Senate began writing its annual spending measures. Senate Republicans view the four appropriations bills the House approved last week - and the batch on tap for this week - as "messaging" bills. They won't go anywhere. No Republicans voted for the appropriations measure last week.

One source told Fox each side is now just trying to decide where the other is willing to land.

The downside is that a CR would only spend $716 billion on defense. Surprisingly, GOP sources say the president seems okay with that. One source noted that with no Defense Secretary, there's nobody at the White House advocating for the Pentagon. So, the defense number could dwindle. Democrats oppose the one-year CR. But they may also prefer a lesser of two evils. That would involve holding the line on defense spending – even if they don't lock in increases elsewhere.

So this is all stalled now. It's amazing to remember that McConnell thought the sides could wrap this up weeks ago. That's why the only thing certain in Washington is uncertainty.