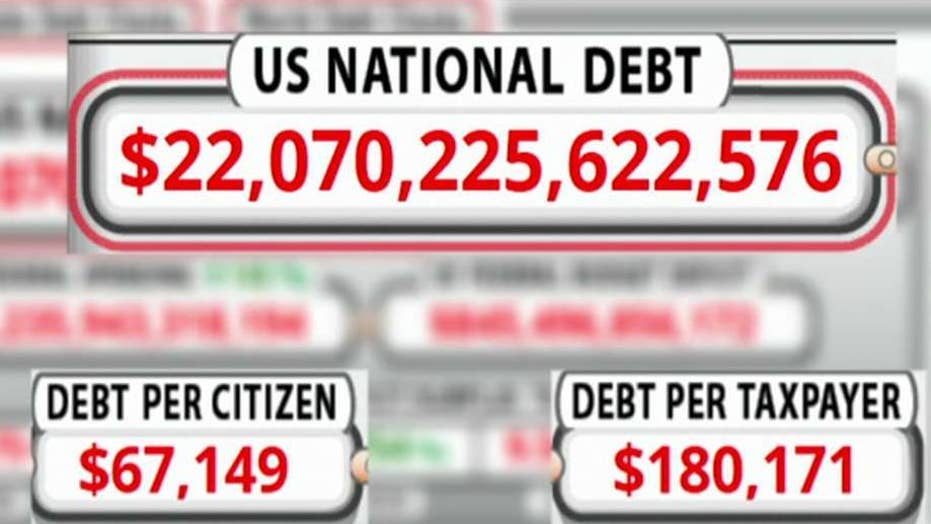 Former Republican staff director of the Senate Budget Committee Bill Hoagland says it would be unprecedented that the U.S. will default on its debt.

The federal government's budget deficit is swelling, but you aren’t hearing much about it in D.C.

This year, the deficit is projected by the Treasury Department to exceed $1 trillion, an increase from $779 billion last year. That comes as the United States’ national debt exceeds $22 trillion.

“Something has to give,” Maya MacGuineas, president of the Committee for a Responsible Federal Budget, told Fox News. “No one wants to be spending more on interest payments than on kids or defense, but that’s the path we are on at the moment.”

Four years ago, when a slew of Republicans were running for president, then-candidate Donald Trump was among those calling for urgent action, saying of the budget deficits: “We're going to bring it down big league and quickly.”

But under Trump as president, deficits have grown: Through the first eight months of this budget year, the budget deficit totals $738.6 billion, an increase of 38.8 percent over the same period last year.

Among reasons for the deficit: the Trump-backed $1.5 trillion tax cut in 2017 and the sharp increases in spending for the military and domestic programs passed by Congress in 2018.

“It’s unprecedented to have a deficit this high when the economy is this good,” MacGuineas said. “Half of this year’s deficit is driven by laws passed by the last Congress and signed into law by the president. The tax cuts did not pay for themselves, not even close. Congress cut taxes with one hand and increased spending with the other, and asked the next generation to pay for both.”

Polling indicates voters in both parties remain concerned about debt -- yet neither Republicans nor Democrats seem to emphasize the deficit much, in what is becoming an anti-austerity era. Not only does the issue merit little attention in Washington, but out on the 2020 presidential campaign trail the Democratic candidates are promising massive and expensive new government programs -- like “Medicare for All,” the “Green New Deal” or student loan forgiveness -- that could swell deficits even more, with estimates running in the trillions.

Democratic candidates have called for raising taxes on the wealthy, though. Former Vice President Joe Biden said Monday, “The first thing I would do as president is eliminate the president’s tax cut.”

“No one wants to be spending more on interest payments than on kids or defense, but that’s the path we are on at the moment.”

— Maya MacGuineas, president of the Committee for a Responsible Federal Budget

Republicans, meanwhile, don’t appear to be as enthusiastic about spending cuts as they once were, when asked about the deficit. During a panel discussion hosted by the Peter G. Peterson Foundation, White House Chief of Staff Mick Mulvaney – who developed a reputation as a budget hawk while a GOP congressman – stated flatly “we are not going to cut our way to balance,” citing the divided political environment.

Instead, Mulvaney expressed hope they can make a dent in the deficit through economic growth and reducing the rate of spending, saying the administration wants to “grow our revenues faster than our expenses.” But the Committee for a Responsible Federal Budget has argued it would take “unprecedented” 4.8 percent average growth over the next 10 years to balance the budget through higher economic growth alone.

"We are not going to cut our way to balance,” White House chief of staff Mick Mulvaney said during a recent panel discussion. (AP Photo/Evan Vucci, File)

Others concerned about the country’s debt have warned that the deficit will never be fixed until changes are made to entitlement programs, like Social Security and Medicare – something Trump has not expressed interest in pursuing.

“Unless significant entitlement reforms are implemented now, before America’s fiscal position becomes too treacherous, the only option available to lawmakers could be to drastically increase taxes, cut government services, or both,” wrote Justin Bogie, a senior policy analyst at the conservative Heritage Foundation.

Congress and the White House are facing several looming battles related to the budget in the coming months: they must come to an agreement over a spending bill by Oct. 1 to avoid a government shutdown. There’s also the threat of default if Congress doesn’t raise the country’s debt ceiling this fall.