Rep. Rashida Tlaib, D-Mich., has claimed that President Trump is “scared” of her and her fellow “Squad” members in the wake of her canceled trip to Israel and the subsequent feud with the president.

“It’s been very clear to me, especially this last week, that he’s scared of us,” Tlaib said in an interview with The Guardian that was published Saturday. “He’s afraid of women of color … because we’re not afraid of him and we’re not afraid to speak up and say that we have a white supremacist in the White House who has a hate agenda.”

“He’s afraid because we have a real agenda for the American people,” she said. 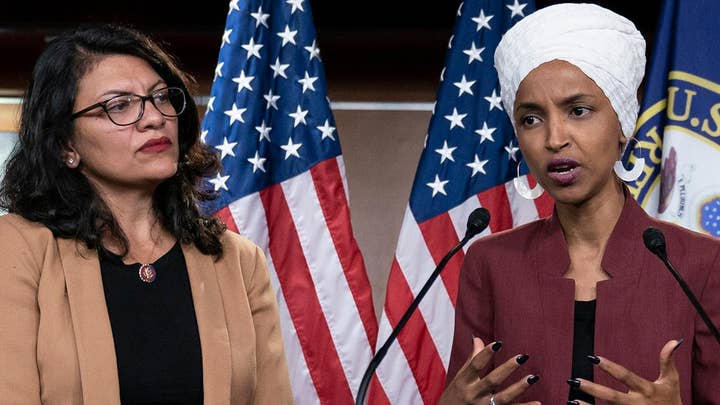 The most recent battle came last week when Omar and Tlaib, known for their strong criticisms of Israel, were blocked from traveling to the country. Israel later granted permission to Tlaib to visit her Palestinian grandmother, but Tlaib decided she did not want to abide by the restrictions placed on her about promoting boycotts of Israel.

“She said I’m her dream manifested,” Tlaib said of her grandmother at a press conference. “I’m her free bird so why would I come back and be caged and bow down?”

Trump suggested the moment was not genuine.

“Sorry, I don’t buy Rep. Tlaib’s tears. I have watched her violence, craziness and, most importantly, WORDS, for far too long,” the president tweeted. “Now tears? She hates Israel and all Jewish people. She is an anti-Semite. She and her 3 friends are the new face of the Democrat Party. Live with it!”

In her interview with the left-wing outlet, Tlaib said that the Squad’s radical ideas – such as Medicare-for-all, a Green New Deal, and higher taxes on the rich -- are more popular with Americans than Trump’s policies.

“He can bring it,” she said, “because we actually have policies that came from the people. What he’s doing by choosing us four as his target is trying to distract folks from the fact that more people are living in poverty than ever, because he has failed as a president.”