Sen. Paul: Protesters were yelling threats, pushing police to get to me

Sen. Rand Paul, R-Ky., told "Fox & Friends" he believes he would have been killed if not for the police when he and his wife were surrounded and attacked by a "mob" yelling threats and pushing police upon exiting the White House after President Trump's acceptance speech at the Republican National Convention (RNC) Thursday night.

"It was horrific," the Republican senator -- who had part of his lung removed due to a complication from the 2017 assault by his neighbor -- told host Steve Doocy of the "unhinged" mob that continued to get bigger and bigger.

"They're attempting to push the police over to get to me, so at one point they push a policeman backwards, he stumbles and he's trying to catch his balance and I catch the back of his flak jacket to stabilize him to make sure he's OK because he's our defense," Paul explained. "If he's down, the mob's loose on us."

If not for the police, Paul said he could've been killed or recovering in the hospital, adding that people followed him into the hotel.

"I truly believe this with every fiber of my being, had they gotten at us they would have gotten us to the ground, we might not have been killed, might just have been injured by being kicked in the head, or kicked in the stomach until we were senseless," he explained.

"You've seen the pictures of what they do to you. If the police are not there, if you defund the police, if we become Portland, if America becomes Portland, what's going to happen is people are going to be pummeled and kicked in the head and left senseless on the curb," he said. "That would have happened to us, I promise you, had we not had the D.C. Police to support us, we are thankful we have police, and we've got to wake up. We can't have the whole country, we can't have Joe Biden rule the country and have no police. I mean, we can't walk down the street in D.C. safely now. That's how bad it is."

Paul was trying to get to his hotel across the street from the White House, but it was blocked by protesters, so he said the Secret Service instructed him, his wife, Kelley, and two female friends to get on a bus, which took 45 minutes to get through all the mobs, and then he planned to get an Uber to get dropped off at the hotel, but the streets were blocked and no one would let them through.

"They were shouting threats to us, to kill us, to hurt us, but also threats saying shout, shouting 'say her name,' Breonna Taylor, and it's like you couldn't reason with this mob, but I'm actually the author of the Breonna Taylor law to end no-knock raids, so the irony is lost on these idiots that they're trying to kill the person who's actually trying to get rid of no-knock raids," he said. 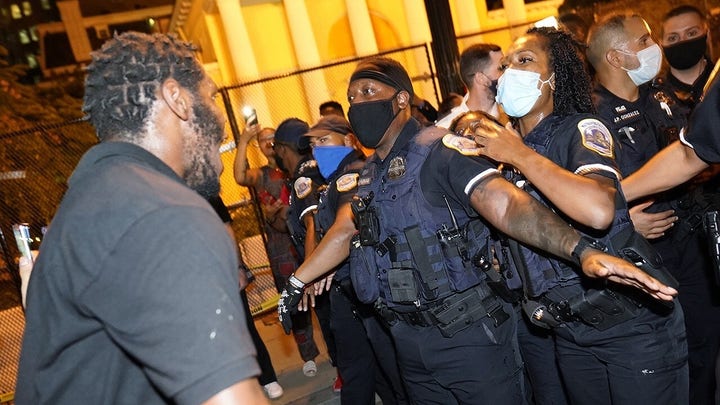 The Pauls were unharmed, but the senator is still calling on the FBI to make arrests and conduct an investigation into the "interstate criminal traffic being paid for across state lines" because people have already been killed in other cities.

"I believe there are going to be people who are involved with the attack on us that actually were paid to come here, are not from Washington, D.C., and are sort of paid to be anarchists," he said. "This is disturbing because really, if you're inciting a riot that's a crime, but if you're paying someone to incite a riot that person needs to go to jail as well."

"They were inciting a riot and they would have killed us had the police not been there," the senator added.

He slammed the Democratic presidential ticket for violence in Democrat-run cities.

"It's become so dangerous for us and I don't hear Joe Biden or Kamala Harris saying one thing about the violence. This mob is their voters. This is the new Democrat party, and if we don't resist this, the United States is going to become Portland. We're going to become Chicago. All of these failed cities Democrats have run, the president said in his speech," he said. "If we allow them to take over the White House, we are going to become Portland, the country will be on fire, we have to have law and order and we have to support the police. I can't say that strong enough."

Hundreds of protesters had gathered outside the White House on Thursday evening as Trump prepared to give his speech from the South Lawn.

Fencing was set up along the perimeter of the White House to keep protesters away, but shouts could be heard from the South Lawn.

Protesters yelled, “No justice, no peace!” and “Join us!” while holding anti-Trump and Black Lives Matter signs, beating drums and playing other music.