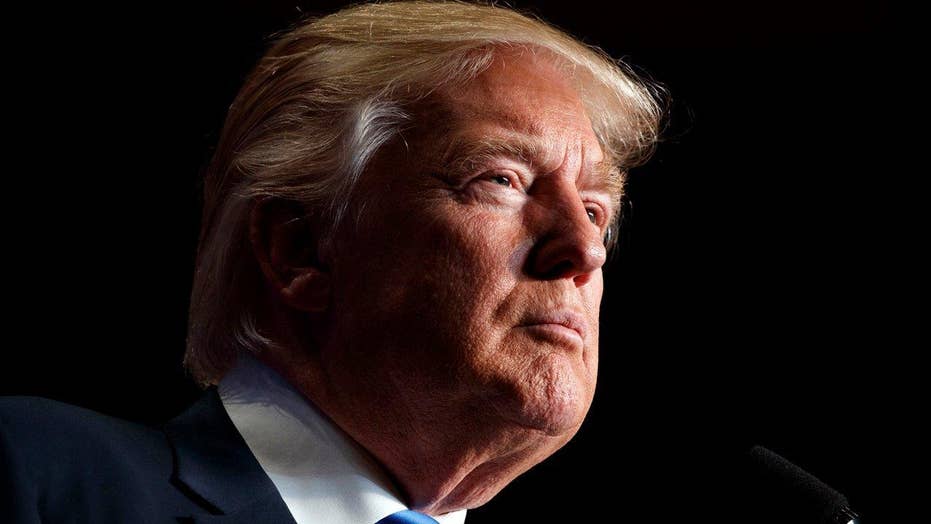 ‘QUID PRO QUO’ CLAIM SETS UP TRUMP PIVOT… IF HE TAKES IT
WikiLeaks has been mostly a bust for Donald Trump. The Russian-backed hacker site has been flinging out lots of emails purportedly stolen from Hillary Clinton’s top political adviser, John Podesta, but it’s really been more embarrassing than scandalous.

But the FBI has delivered for Trump, bigly.

In the most recently released documents from the agency’s investigation into Clinton’s mishandling of state secrets, an agent is seen complaining about an aide to Clinton offering him a ‘quid pro quo’ deal to change the classification level on an email on Clinton’s secret server.

The agent reported that senior Clinton aide at the State Dept. Patrick Kennedy was offering to give the agency much-sought-after placements at embassies overseas if the FBI could see its way clear to change the classification on an email marker ‘SECRET.’

Clinton’s campaign and the State Department have denied any misconduct, saying essentially that the agent was conflating two things.

Now, it’s not entirely surprising that Team Clinton would have wanted classifications changed. And in fact, emails are often and quite appropriately declassified.

But it’s hardly helpful for her to have this sordid allegation drop just ahead of Wednesday’s third and final presidential debate, which will be moderated by Fox News colleague Chris Wallace.

Trump is attempting to pivot to the issue as he deploys a new slogan: ‘Drain the swamp.’

The release does seem to cut against Trump’s argument of FBI and Justice Department corruption. After all, if the agency were as crooked as Trump says, why would it allow information harmful to Clinton to be released? It’s only mostly corrupt?

Anyway, the release affords Trump a chance to stop talking about past sexual misconduct – a firefight with Clinton that he decisively lost.

Of course, Trump has had many, better opportunities to get back on message throughout his campaign.

But if this helps him further delegitimize the government and deepen his argument that corruption is so endemic that it requires rough justice from Trump and his supporters then this could be a serious asset.

Melania Trump wants husband to keep up sex-scandal attacks on Hillary - Fox News: “Melania Trump, wife of Republican presidential nominee Donald Trump, sat down with ‘Fox & Friends’ host Ainsley Earhardt…’ Those words, they were offensive to me and they were inappropriate,’ Melania Trump said. ‘And he apologized to me. And I expect – I accept his apology. And we are moving on.’ The real estate tycoon’s wife said if Trump’s opponents can use his words against him, it is only fair for the Trump campaign to raise the issue of Bill Clinton’s well-chronicled sexual indiscretions, and Democratic nominee Hillary Clinton’s efforts to suppress them.”

THE RULEBOOK: IT’S ONLY FOUR YEARS
“It cannot be affirmed, that a duration of four years, or any other limited duration, would completely answer the end proposed; but it would contribute towards it in a degree which would have a material influence upon the spirit and character of the government.”– Alexander Hamilton, Federalist No. 71

TIME OUT: MONSTROUSLY HELPFUL
A poisonous lizard in the Arizona desert is helping scientists treat human diseases. Atlantic: “Studying the Gila monster isn’t just an exercise in academic curiosity. This stumpy lizard has already improved human health. In the 1990s, endocrinologist John Eng identified a protein in its saliva, known as exendin-4, which was similar to a human hormone that controls our blood-sugar levels. It seemed like a promising way of managing type 2 diabetes, especially since it lasted much longer than its human counterpart, and would only need to be injected daily rather than hourly. After years of development, a synthetic version of exendin-4, known as exenatide and marketed as Byetta, was approved by the FDA in 2005. It is currently used to manage type 2 diabetes, and it might even help to protect against degenerative brain diseases like Alzheimer’s or Lou Gehrig’s disease.”

In Florida, there is still a fight to be had. Although Clinton leads by 4-points according to Quinnipiac, Trump widened his support by 3 points since the last poll while Clinton gained 2 points.

Good news for Trump is that he continues to show a strong performance in the most important state for any Republican nominee: Ohio. The Q poll shows Trump tied with Clinton, and a CNN poll of the Buckeye State seems to confirm a Trump preference with him leading by 4-points.

The toughest fight could be in North Carolina and Nevada. Clinton leads Trump by just 1 and 2 points respectively according to CNN polls. The Q poll, gives Clinton a slightly higher edge in the Tar Heel State, with her leading by 3 points.

Hillary spends big in red states, expanding her map - NYT: “Mrs. Clinton is ‘dramatically expanding’ her efforts in Arizona, her campaign manager, Robby Mook, told reporters on Monday. She is pouring more than $2 million into advertising and dispatching perhaps her most potent surrogate, Michelle Obama, for a rally in Phoenix on Thursday. In Indiana and Missouri, Mr. Mook said, the campaign will spend a total of $1 million to drive voter turnout, despite what he acknowledged was an ‘uphill battle’ for Mrs. Clinton in two states that could determine control of the Senate. Mrs. Clinton is also directing more money to a series of presidential battleground states with competitive House races.”

AUDIBLE: BUT MANY PEOPLE ARE SAYING...
“This election is not being rigged.” – Sen. Marco Rubio during the Florida Senate debate Monday night.

Trump doubles down on conspiracy claims at campaign rally in Wisc. - USA Today

Eliana Johnson breaks down the most important Senate race. And it’s not where you might think - NRO

Heck on tape saying ‘I really’ want to support Trump, but can’t - CNN

FROM THE BLEACHERS
“I’m more concerned about how the Obama’s leave the White House. Should Trump prove successful what will they find in the White House and Oval Office? Bush had real problems with conditions after Clintons left and the animosity seemed to me to be less at that time.” – Mary Thompson, Las Cruces, N.M.

[Ed. note: If Trump wins, the transition between administrations promises to be not just acrimonious but also fraught. Many members of the current team would probably feel obliged and even justified in thwarting Trump’s policy and personnel objectives.]

“I’ve noticed that the last few Halftime Reports, and your Friday visit to Kilmeade’s radio show, have been far more serious, and not as free with the quips and whimsy that I’ve looked to you for as a counterbalance to all of this election’s negativity.  Here in Oregon we were just pummeled with storms for several days, remnants of a South Pacific typhoon that wandered up our way.  Downed trees and power lines, flooding in the streets - Heck - even a couple tornadoes out on the Oregon Coast!  A friend and I talked this morning about how we up here are finally weary and downcast.  So I must ask - have you reached a similar point given the typhoon remnants from the campaign’s last couple of weeks?  What can we do to prop you up?   Please know this - your keeping us in good humor is serious business!” – Cliff Jetton, Newberg, Ore.

[Ed. Note: I promise a return to frivolity, Mr. Jetton. And your email is a good bit of propping up indeed! But I do think that it’s important for now that we remind each other of the important truth that politicians cynically avoid: America is still the last, best hope of earth. We will survive this horrid election. We will come back better than before. But I promise to still be quick with the jokes and repartee!]

“I remind you that Al Franken won a MN Senate seat due to a few hundred votes found in the trunk of some guy’s car. It is true that good ole boys know how many votes are needed for a given election, but we rednecks are not the only election manipulators. I enjoy your emails-thanks.” – Pat Junko, Guntersville, Ala.

[Ed. note: Quite right! Elections not only are tampered with, some have actually been stolen. And when races are close, the crooks come out. But this election isn’t close right now.]

HO, HO FREAKING HO
KVOA: “Fire crews rescued a 26-year-old man stuck in his chimney for four hours, according to the Tucson Fire Dept. A neighbor heard the man yelling for help Sunday morning at a home near the University of Arizona. The man told fire crews he had locked his keys in his house and was trying to get back inside through the chimney. The man’s feet were touching the floor, but he was wedged in too tight to move, according to TFD. Fire crews pulled the man back out with a rope. He was checked out by paramedics and did not appear to be injured, according to TFD.”

AND NOW, A WORD FROM CHARLES…
“The first is that this is probably normal procedure inside of any administration, inside a bureaucracy – trading off favors, trading off probably shady maneuvers. But the problem is this. The charge that Republicans, Trump in particular, are making against Hillary Clinton is precisely that she represents business as usual.” – Charles Krauthammer on “Special Report with Bret Baier.”