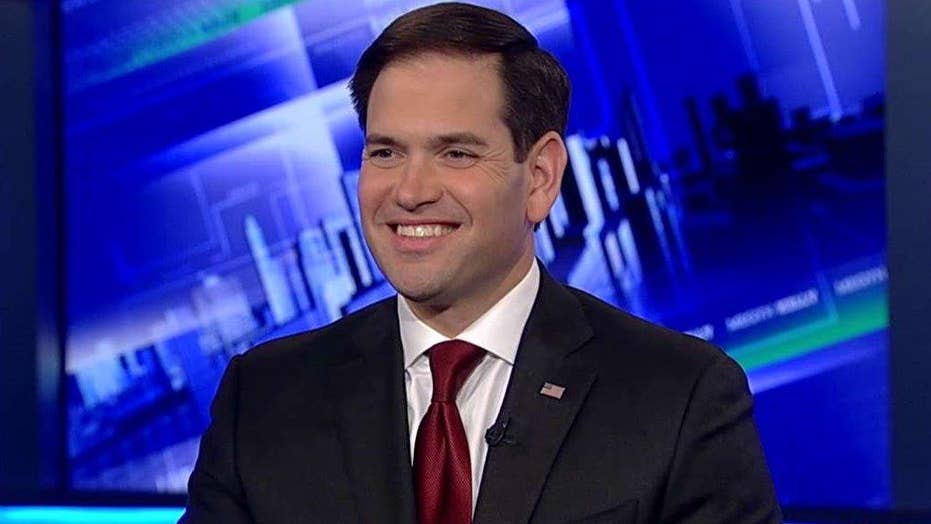 Marco Rubio on sparring with Ted Cruz over immigration

On 'The Kelly File,' presidential candidate on immigration, terror, mistrial of Baltimore cop

Marco Rubio is getting behind a state-based effort to amend the Constitution with term limits and other restrictions on the federal government -- energizing the movement as the Republican presidential candidates try to woo Tea Party-aligned voters.

The Florida senator joins a handful of other GOP candidates in backing the push, an against-the-odds campaign being waged by conservative advocacy groups and state lawmakers. He went all in at a campaign stop Tuesday in Iowa, where caucus-goers will decide the first-in-the-nation nominating contest in roughly four weeks.

“My first day in office I will announce I am a supporter,” said Rubio, after months of expressing tepid support.

In doing so, he is lending his name to a grassroots movement seeking what is essentially a national convention to amend the Constitution. Various groups have various goals, but Rubio specifically supports using the process to impose a congressional balanced-budget amendment and place term limits on Supreme Court justices and members of Congress.

He vowed if elected to “put the weight of the presidency” behind the effort.

Americans frustrated with what they consider Washington morass, insularity and gridlock point out that Article V of the Constitution says Congress must call a convention when two-thirds of state legislatures file an “application.”

The minimum 34 states appear to have given some measure of support. But the effort has been delayed for years over such issues as rules for a convention and how the petitions were approved and worded to meet varying agendas.

Rubio -- in third place in most national polls behind front-runner Donald Trump and Sen. Ted Cruz -- is not the first 2016 GOP White House contender to champion the effort.

But the backing of a top-tier candidate like Rubio appears to have ignited some in the GOP base.

“I’ve never been more excited about our prospects for achieving real governmental reform as I am right now,” Mark Meckler, co-founder of the Convention of States Project and president of Citizens for Self-Governance, said Wednesday.

“It is gratifying when a national-level leader like Sen. Marco Rubio acknowledges that it is imperative for the citizens to act to take power away from Washington, D.C., and return it to the people.”

Kasich is arguably the GOP candidate at the forefront of the effort. And as a fiscal conservative, he wants to use the effort expressly to force Washington to pass balanced budgets.

Though Rubio appeared Tuesday on stage to endorse the idea, he had expressed concerns earlier about state delegates uniting at a convention to rewrite the Constitution, which could jeopardize closely held First and Second Amendment rights.

After the rally, he also suggested that Congress doesn't have the will to impose term limits or pass a balanced budget amendment. As for how a convention might play out, he told reporters his campaign is “looking” at the specifics.

Concerns about rewriting the Constitution are not unfounded.

The Constitutional Convention, held in Philadelphia in 1787, was purportedly to revise the Articles of Confederation. But the roughly four-month-long meeting resulted in George Washington and other organizers drafting the Constitution.

“Marco Rubio knows that the answers to American’s lack of confidence in Washington can only be fixed through an Article V,” Coburn said in a statement. “He also knows that Washington will not fix itself.”