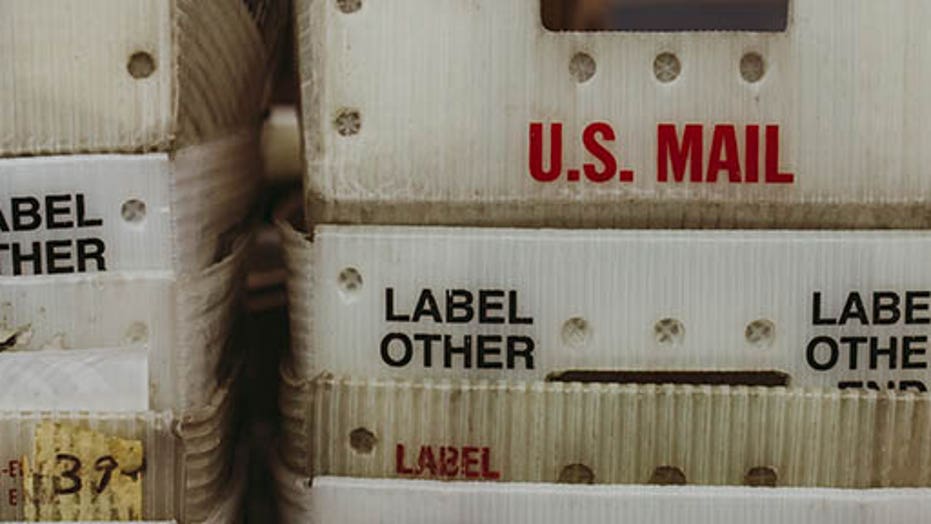 The Government Accountability Office (GAO) released a report Wednesday detailing the tenuous financial position of the U.S. Postal Service (USPS), warning that the post office's "current business model is not financially sustainable," and calling on Congress to pass legislation to set the agency on a better fiscal path.

The report lays out the reasons USPS has struggled financially in recent years, including a 44 percent decline in First-Class Mail volume since 2006, increased pension and salary costs for its workers and increasing debt.

"USPS is the largest postal service in the world, delivering an estimated 47 percent of all mail sent globally," the report says. "USPS's financial viability, however, has been on GAO’s High Risk List since 2009 due to its poor financial condition, which has worsened in recent years due to declining mail volumes and rising costs."

TRUMP THREATENS TO BLOCK FUNDING FOR USPS IF THEY DON'T RAISE PRICES: 'THE POSTAL SERVICE IS A JOKE'

Specifically, the GAO recommends that Congress "consider reassessing and determining the (1) level of postal services the nation requires, (2), extent to which USPS should be financially self-sustaining, and (3) appropriate institutional structure for USPS."

Some of the possible congressional actions the report recommends include reducing how frequently mail is delivered as New Zealand has done with its postal service, restructuring the post office to either function more -- or entirely -- like a private company or making it a taxpayer-funded agency.

"Absent congressional action on critical foundational elements of the USPS business model, USPS’s mission and financial solvency are increasingly in peril," the report concludes. "USPS’s growing difficulties to provide universal postal service in a financially self-sustaining manner provide Congress with the need to consider fundamental reform of the entire framework of postal services in the United States."

Republicans on the House Committee on Oversight and Reform emphasized the need for changes to the post office that make it self-sufficient and warned against a potential bailout of the agency that has been floated in the wake of the coronavirus crisis, which has reportedly put a significant dent in the service's already declining revenues.

"This report reiterates what many of us have known for a long time: The Postal Service’s business model is failing and simply throwing more of taxpayer’s hard-earned money at them won’t fix their problems," Rep. Jim Jordan, R-Ohio said. "If Congress is going to be asked to get the Postal Service out of yet another fiscal jam, we owe it to the American people to make sure we aren’t just setting them up for yet another bailout the next time there’s an emergency."

"From years of mismanagement, ballooning costs, and a lack of accountability, the United States Postal Service is truly an agency in dire need of reform," he said. "While Democrats continue to push for a complete bailout of the Postal Service in COVID-19-related legislation, the report released today makes clear that the systemic issues within the Postal Service far pre-date this pandemic."

Democrats, on the other hand, have for over a month been calling for the legislative branch to help the flagging executive agency.

"The Postal Service is in need of urgent help as a direct result of the coronavirus crisis," Oversight Committee Chairwoman Carolyn Maloney, D-N.Y., and Rep. Gerry Connolly, D-Va., said in a joint statement in late March. "Based on a number of briefings and warnings this week about a critical fall-off in mail across the country, it has become clear that the Postal Service will not survive the summer without immediate help from Congress and the White House."

The report's release comes at a time the postal service is making headlines, with the agency naming Republican donor Louis DeJoy its new postmaster general on Wednesday. The move followed a request to Congress from the former Postmaster General Megan J. Brennan early last month for $22 billion in stimulus dollars in the short term and $54 billion beyond that, citing shortfalls that are "threatening our ability to operate."

The request was met with derision last month from President Trump, who threatened to withhold funding from the agency if it didn't raise its prices for package service to companies like Amazon, calling the service a "joke."

Later that day, Trump backtracked, saying "I will never let our Post Office fail," in a tweet.

On Wednesday, Senate Democrats sent a letter to Treasury Secretary Steve Mnuchin on Trump's comments that USPS "should raise the price of a package by approximately four times," in the case of "Amazon and other internet companies."

"We are therefore very disturbed to hear President Trump’s public statements threatening approval of the $10 billion loan unless conditions are added such as hiking prices perhaps to even four or five-times as high as current levels," the Senate Democrats said. "These threats appear to be thinly-veiled attempts to retaliate against what he sees as a vocal critic of his presidency, the Washington Post, and its owner Jeff Bezos."

They continued: "We strongly recommend that you reject any politically-motivated conditions that would force price increases, service or benefit cuts, or otherwise hinder the excellent work of the USPS when considering the pledged $10 billion emergency loan or any other relief for the USPS."

"We have also stated that while USPS may be able to improve its financial viability if it took more aggressive action to reduce costs, it was unlikely that those actions alone would fully resolve USPS's problems unless Congress also took action," it says.