Pompeo says that the age of self-inflicted American shame is over.

Secretary of State Mike Pompeo on Thursday launched an astonishing rebuke of former President Barack Obama’s foreign policy at the site of Obama’s famous speech to the Muslim world -- declaring that “the age of self-inflicted American shame is over.”

Pompeo delivered his remarks in Cairo, where Obama famously spoke in 2009 and promised a new beginning with Muslim and Arab countries. He was criticized by conservatives for placing too much blame on the U.S. for strife in the region.

Pompeo, while not mentioning Obama by name, said that “it was here, in this city, another American stood before you” and “told you that radical Islamist terrorism does not stem from ideology.”

POMPEO WARNS IRAN OVER PLANS TO LAUNCH ROCKETS INTO SPACE

“He told you that 9/11 led my country to abandon its ideals, particularly in the Middle East,” he said at the American University in Cairo. “He told you that the United States and the Muslim world needed ‘a new beginning.’ The results of these misjudgments have been dire.”

Pompeo said that under Obama, the U.S. abandoned its allies and was “timid” about asserting itself, that the U.S. “grossly underestimated the tenacity and viciousness of radical Islamism,” and kept silent as Iranians tried to rise up against the regime in Tehran.

He also criticized Obama-era policy for “wishful thinking [that] led us to look the other way” as Hezbollah built up its weaponry in Lebanon, and for doing nothing as Syrian President Bashar Assad gassed his own people.

He then took another swipe at the 2015 Iran nuclear deal -- from which the U.S. withdrew last year. The U.S. has since re-imposed economic sanctions on the country, including on oil exports.

“Our eagerness to address only Muslims, not nations, ignored the rich diversity of the Middle East, and frayed old bonds. It undermined the concept of the nation-state, the building block of international stability,” he said. “And our desire for peace at any cost led us to strike a deal with Iran, our common enemy.”

But he promised his audience that the Trump administration was ushering in a new era of U.S. foreign policy. 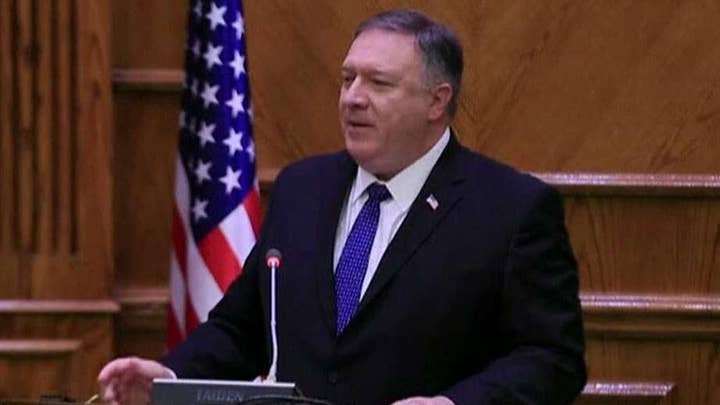 “The good news is this: The age of self-inflicted American shame is over, and so are the policies that produced so much needless suffering. Now comes the real ‘new beginning,’” he said.

His speech emphasized America as a force for good in the region. He cited accomplishments under Trump’s leadership -- including the pushback of Islamic State, the withdrawal of more troops and personnel from Iraq and Saudi Arabia, and building a coalition to push back against Iranian influence.

“We have rediscovered our voice. We have rebuilt our relationships. We have rejected false overtures from enemies. And look at what we have accomplished together,” he said.

Pompeo’s speech comes as part of a tour of the region, including Jordan and other Gulf nations, as he seeks to coordinate an anti-Iran strategy. It comes after a sudden decision from President Trump last month to withdraw U.S. troops from Syria, leading to concern from some allies in the region about U.S. commitments.

On Thursday, Pompeo appeared to attempt to assuage those fears by pledging U.S. commitment.

“Our aim is to partner with our friends and vigorously oppose our enemies, because a strong, secure, and economically viable Middle East is in our national interest – and yours,” he said. “Let me be clear: America will not retreat until the terror fight is over.”