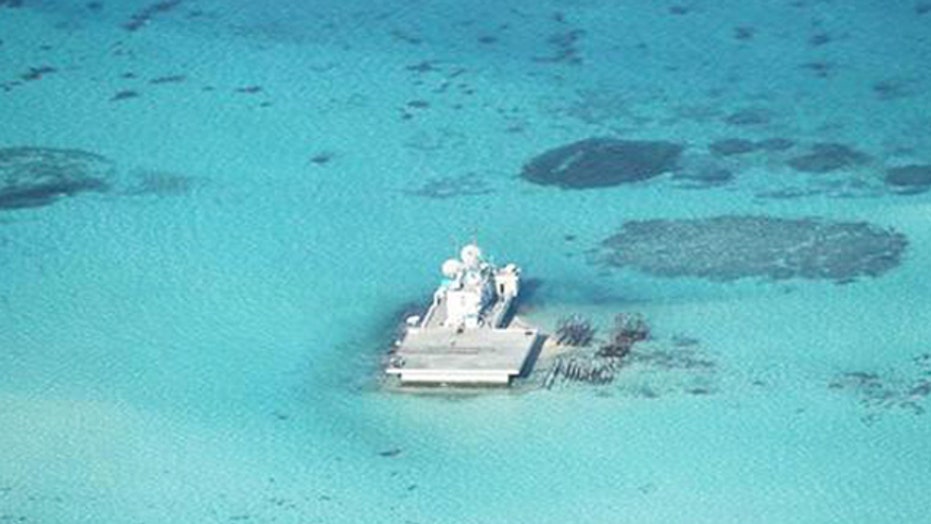 KT McFarland on what this new report means for U.S. national security

China has built up and reclaimed even more land in the South China Sea than previously thought -- with an archipelago of man-made islands now spanning 2,900 acres, according to a new Pentagon report released Friday.

The size of China's artificial island territory in the disputed waters represents a 50 percent jump over the most recent estimate of 2,000 acres.

Since Chinese land reclamation efforts began in December 2013, the country has reclaimed land at seven of its eight Spratly Island outposts and, as of June 2015, had reclaimed more than 2,900 acres of land, according to the Asia-Pacific Maritime Security Strategy report released Friday.

Although land reclamation – the dredging of the sea floor material for use as land – is not new or even unique in the South China Sea, “China’s recent land reclamation campaign significantly outweighs other efforts in size, pace and nature,” the report states. By comparison, Vietnam has reclaimed a total of 80 acres and Taiwan has eight acres near the airstrip on its sole outpost on Aba Island.

Before this year, defense officials thought Beijing had only reclaimed about 500 acres of landmass to build the artificial islands. However, the lands are now big enough for buildings and equipment. The Pentagon report warned the infrastructure would allow China to have a "more robust power projection" in the South China Sea. Citing China's own statements the outposts "will have a military component," the report also said China is completing the construction of an airstrip.

The report said China may, then, be able to use the outposts as an alternative airstrip for "carrier-based aircraft," allowing China "to conduct sustained operations with aircraft carriers in the area."

The runway, though, is just part of China's unusual and alarming "land reclamation" project. Earlier this year, the U.S. military called the project "extensive," involving China "pumping sand on to live coral reefs" and then paving over them with concrete.

The Defense Department warns the outposts can be used for surveillance systems, harbors and logistical support. A report earlier this year described how China has "excavated deep channels and built new berthing areas to allow access for larger ships to the outposts."

U.S. officials fear the islands could be used for military purposes and may pose a threat to one of the world’s biggest commercial shipping routes as China claims land in what other countries see as international waters, according to The Wall Street Journal.

Defense officials also believe China’s assertiveness poses a risk of possible confrontation down the line with the U.S.

Friday’s report comes about a month before Chinese President Xi Jinping is scheduled to make a visit to Washington, where the South China Sea will be among the issues at hand.

The U.S. has repeatedly questioned whether Beijing had ceased the land reclamation projects, as it claimed earlier this month. Chinese embassy spokesman Zhu Haiquan told The Wall Street Journal on Thursday the projects stopped in June and the facilities being built on the islands include those for public good.

“China stands ready to open these facilities to other countries upon completion,” Zhu said. “We hope the U.S. side will view this in an objective and balanced way and respect regional countries’ efforts to maintain the peace and stability of the South China Sea.”

China has also increased patrols on the disputed areas to “increase its effective control” over the islands, according to the report.

The latest moves from China have some U.S. military officials pushing the Pentagon to be more aggressive in countering China in the region. They’ve wanted more assertive maritime and air patrols to fly within the 12 nautical mile territorial limit of some of the disputed lands China claims, according to The Wall Street Journal.

On Thursday, Secretary of Defense Ash Carter said the military would go where and when it wanted, but it remained unclear whether they’ve flown within the 12 nautical mile zone of the islands.