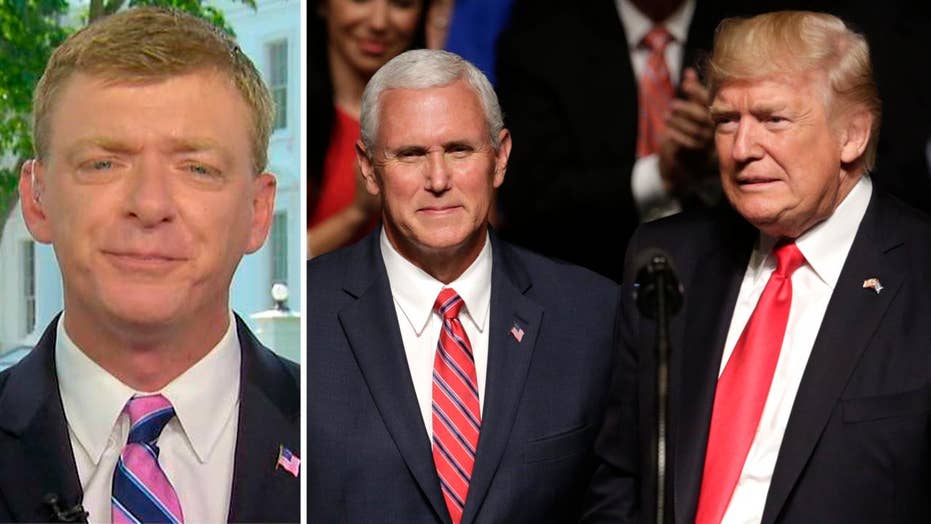 As the White House fights back another Russia-related distraction, Vice President Mike Pence is striking a delicate balance between distancing himself from the upheaval and standing by the president.

Meanwhile, the former Indiana governor is stoking speculation about his future plans as he ramps up political activities and courts party donors, including keynoting a conference of young Republicans this weekend in Washington.

All this while some Democrats are now backing efforts to remove President Trump from office – an unlikely outcome because of Republican majorities in Congress but one that would put Pence in the nation's highest office.

On Friday, House minority leader Nancy Pelosi said Democrats “need more evidence” but said she “will not close that door” on trying to impeach Trump.

Her comments follow revelations about Donald Trump Jr.’s meeting this week with a Russian lawyer, which have emboldened the president’s critics who argue it shows evidence of collusion between the Trump campaign and Russia.

The meeting with Russian lawyer Natalia Veselnitskaya occurred June 9, 2016. Pence was announced as Trump’s running mate more than a month later on July 16.

Lotter emphasized this week to the New York Times that Pence had no meetings with anyone associated with the Russian government during the campaign or transition.

Despite the drama, Pence himself is keeping up appearances as an enthusiastic partner to Trump, using his Twitter account to demonstrate loyalty to the president as the Trump Jr. email controversy dominates headlines.

“Many Media & Dems will try to stop us but now more than ever we owe the American people to continue to deliver what @POTUS & I campaigned on,” Pence tweeted on Wednesday.

In another tweet, the vice president tweeted an image that said: “Thanks to the leadership of President Trump, we are in the midst of a great national renewal.”

As he sought to distance the vice president from the controversy involving Trump Jr., Pence’s spokesman also went out his way to express Pence’s allegiance to Trump.

“The vice president is working every day to advance the president's agenda, which is what the American people sent us here to do,” Lotter said.

On Wednesday, two liberal Democratic congressmen introduced an article of impeachment that accused Trump of obstruction of justice over his firing of former FBI Director James Comey. They argued the president was improperly trying to shut down the bureau’s investigation into any ties between Trump campaign associates and Russia during the presidential race.

The House is highly unlikely to move on the measure, as it takes a majority of House members to pass an article of impeachment. Even if the GOP-led House were to pass impeachment articles, the GOP-controlled Senate would then vote to acquit or convict.

But as he promoted his effort, one of the sponsors, California Rep. Brad Sherman, acknowledged the prospect of Pence assuming the presidency.

“I served with Mike Pence in Congress for twelve years and I disagree with him on just about everything,” Sherman said. “I never dreamed I would author a measure that would put him in the White House.”

As his political future is speculated upon, Pence will deliver a speech Saturday night at an event sponsored by Maverick PAC. The group is made up of young Republicans who are active in fundraising and work in a variety of industries, including oil and gas, banking, food and beverage, communications, technology and politics.

His appearance follows other recent instances of invigorating his political activity. The New York Times reported that Pence has recently been courting donors, corporate executives and conservative leaders during private gatherings at his residence at the Naval Observatory.

And in May, Pence filed paperwork to start his own leadership PAC, called the Great America Committee, which he can use to funnel money to GOP congressional campaigns. An adviser said at the time that the PAC was being set up to support Trump's legislative agenda.