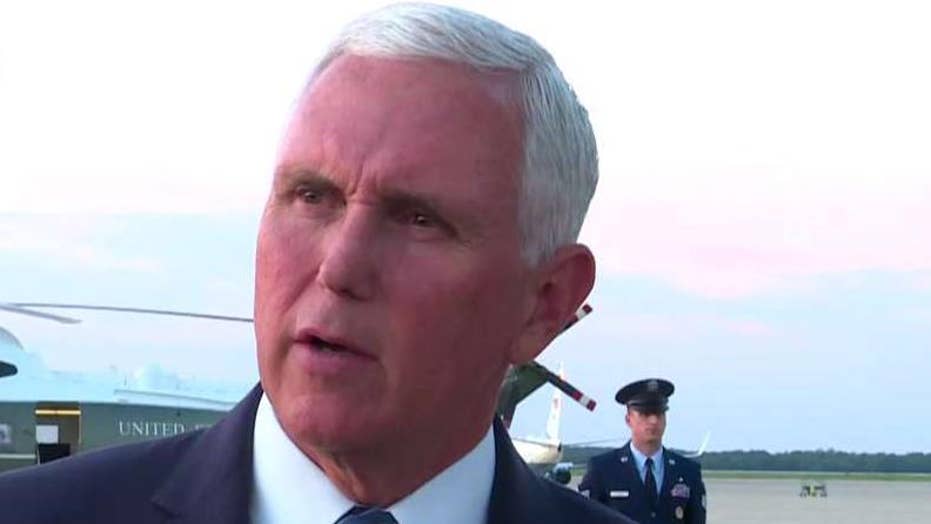 Vice President Mike Pence, speaking at a ceremony in Warsaw to memorialize the 80th anniversary of the start of World War II, praised the "indomitable spirit, strength and resilience of freedom-loving" Poles in the face of fascism and communism -- and pledged to push NATO members to spend more on defense from future threats.

Although President Trump abruptly canceled his planned trip to Poland because of Hurricane Dorian and sent Pence in his place, the president's longstanding calls for more mutual defense spending were front and center in Pence's prepared remarks.

"America and Poland will continue to stand for our common defense, and we will also continue to call on all our allies to live up to the commitments we have made to one another," Pence said.

"For 'Americans know that a strong alliance of free, sovereign and independent nations is the best defense for our freedoms and for our interests,' he added, quoting Trump's 2017 address at the Warsaw Uprising Monument.

NATO Secretary General Jens Stoltenberg, in a historic address to Congress last April, declared that Trump's push for NATO allies to increase their defense spending has “had an impact” and made the alliance stronger.

World leaders met for high-level talks in Poland this weekend amid the memorials. Poland's defense minister said Saturday that six locations for additional U.S. troops have been agreed on with Washington and talks continue on one more site.

In June, Trump agreed to send 1,000 more U.S. troops in addition to the 4,500 already stationed at six different locations across Poland. The U.S. will also place a division-level command in Poland.

Also on Saturday, Ukrainian President Volodymyr Zelenskiy said he and Poland's president have agreed that sanctions ought to continue against Russia until Ukraine regains the territory it lost in Moscow's 2014 annexation of Crimea.

During the observances Sunday, church bells tolled across a capital that German forces razed to the ground decades ago. Polish and foreign leaders laid wreaths, and one by one rang a bell in memory.

For most of his address, Pence focused on the heroism of the Polish people in the face of invasion.

"Right here in this city, more than 150,000 Polish men, women and children gave their lives in just 9 weeks of the Warsaw Uprising, which eventually saw the deliberate and total destruction of this city while Soviet forces stood by and allowed the slaughter," Pence said. "They died fighting to liberate these blood-stained streets from fascism, dictatorship, and the looming menace of communism."

"While the hearts of every American are with our fellow citizens in the path of a massive storm, today we remember how the gathering storm of the 20th century broke into warfare and invasion followed by unspeakable hardship and heroism of the Polish people," Pence said.

The "character, faith, and determination of the Polish people made all the difference," Pence said. "Your oppressors tried to break you, but Poland could not be broken."

Trump's decision to cancel his planned trip to Poland came as a sharp blow to Poland's populist government, which had been counting on the visit for a boost ahead of October elections.

Trump announced late Thursday that it was "very important" to stay home to deal with Hurricane Dorian, which is predicted to make landfall in Florida on Monday.

Still, Pence quoted repeatedly from Trump's 2017 address in Poland, which at the time was recognized as a full-throated defense of Western traditions and a historic warning of the new threat of "radical Islamic terror."

Spectators hold candles in their hands at the memorial service during ceremony marking 80th anniversary of World War II start at the exact place and time when Nazi Germany dropped its first bombs in the war, in Wielun, Poland, Sunday, Sept. 1, 2019. Observances in Warsaw will be attended by U.S. Vice President Mike Pence, in place of invited President Donald Trump.(AP Photo/Czarek Sokolowski)

"Through the brutality of war and through 'four decades of communist rule,' as President Trump said two years ago, 'Poland and the other captive nations of Europe endured a brutal campaign to demolish [your] freedom, … your laws, your history, your identity [and your faith]. . . . Yet you never lost that spirit. Your oppressors tried to break you, but Poland could not be broken,'" Pence said.

"A memorial cross to honor that historic moment in Polish history stands in this square opposite the Tomb of the Unknown Soldier as a symbol of Polish faith, hope and resolve," he added. "It is a permanent testament to the belief of the Polish people that true solidarity among people and among nations is only possible when that solidarity is seen in the light of a providential Creator."

He continued: "As President Trump said here in Warsaw two years ago, America never gave up on the 'freedom and independence of the Polish people, and we never will.'"

A top aide to Polish President Andrzej Duda, Krzysztof Szczerski, said Trump apologized in a phone call with Duda and promised to reschedule when possible.

"It's very understandable and obvious that the president, who is also responsible for emergency situations in the United States, should be there and wants to be there," Szczerski said in comments Friday to the TVN broadcaster.

Some political opponents, however, voiced satisfaction that the ruling party lost the potential electoral boost that it had counted on six weeks before Oct. 13 parliamentary elections.

The populist Law and Justice party is already far ahead in the polls, riding the wave of a booming economy and popular social spending policies. Still, it will be fighting to hold on to the parliamentary majority that it now holds.

On this government's watch, Poland has officially transitioned to a "developed market," and the prime minister — a former banker — pledged this week that Poland next year will have its first deficit-free budget in the 30 years since communism collapsed.

Also at Sunday's ceremonies, Germany's president expressed deep remorse for the suffering his nation inflicted on Poland and the rest of Europe during World War II, warning of the dangers of nationalism as world leaders gathered Sunday in the country where the war started at incalculable costs.

Elderly Polish war veterans wearing military uniforms and a Holocaust survivor wearing a yellow Star of David -- and the striped clothes that prisoners wore at Nazi German death camps -- were in attendance.

The observances started at 4:40 a.m. at the sites of the first German attacks — Wielun, a defenseless town, and minutes later on the Westerplatte Peninsula in Gdansk.

"Mr. President, thank you for your presence and your attitude," Duda said. "I can see a man who has come with humility, a bowed head in order to pay homage ... to share the pain."