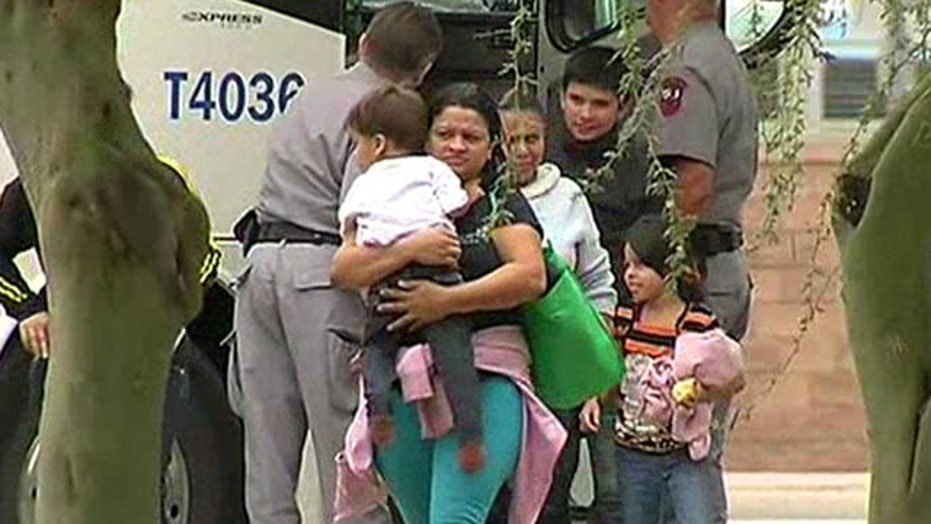 The flood of illegal immigrants -- particularly children -- crossing into the U.S. along the southern border is at a "crisis" level, creating a humanitarian emergency that both immigration officials and lawmakers are putting at the feet of the Obama administration.

Sen. Jeff Sessions, R-Ala., who for years has been warning that the administration's easing of immigration enforcement would create a crisis along the border, said: "President Obama is responsible for this calamity."

Recriminations are flying as state and federal officials grapple with a surge in illegal immigrant children -- some accompanied, some not -- flowing into Texas. With resources there over-burdened, many of the children and others are being sent to Arizona, in turn overwhelming resources in that state. Arizona officials say they are now rushing federal supplies to a makeshift holding center in Nogales, as it runs low on the basics.

But some are warning that the administration, rather than tightening enforcement in response, is continuing on the same path of steadily easing off immigration rules.

"The rising crisis at the border is the direct and predictable result of actions taken by President Obama," Sessions said, adding that "only by declaring to the world that our border is no longer open -- and that the law will be restored -- can this emergency be stopped."

Some of those warnings are coming from inside the administration.

According to portions of a memo obtained by Fox News, an official with Customs and Border Protection wrote late last month that current policies are serving as an incentive for more to cross.

"If the U.S. government fails to deliver adequate consequences to deter aliens from attempting to illegally enter the U.S., the result will be an even greater increase in the rate of recidivism and first-time illicit entries," Border Patrol Deputy Chief Ronald D. Vitiello wrote in the May 30 memo.

Among the policies that allegedly are creating a magnet for illegal immigrants is what's known as Deferred Action for Childhood Arrivals. The unilateral policy in 2012 allowed some illegal immigrants who came to the U.S. as children to defer deportation -- among other criteria, they must have come to the U.S. before they were 16 years old, be younger than 31 on June 15, 2012, and have been in the country since at least June 15, 2007, and have no criminal history.

The administration extended that program earlier this month, allowing the immigrants to apply for protection from deportation for another two years.

House Judiciary Committee Chairman Bob Goodlatte, R-Va., said in a statement that the extension and changes would "proactively invite fraud and abuse."

In December, a U.S. District Court judge in Texas also claimed that federal agents were intercepting human smugglers transporting children at the U.S.-Mexico border -- and then delivering those children to illegal immigrant parents in the U.S.

The situation is likely more complicated and involves more agencies than the order made it sound. It is a matter of public record that thousands of illegal immigrant children and teens are caught trying to enter the United States, and often sent to federally run care centers while their status is determined.

Judge Andrew Hanen's order, though, claimed the Obama administration was engaging in a risky practice by delivering some children to their parents. He argued that the practice would only encourage more parents to have their children smuggled over the border, through operations often connected to the drug cartels.

"These actions are both dangerous and unconscionable," he wrote.

Further, the administration for years has prioritized deportations to focus on those who commit crimes or pose other threats. Immigration officials have argued that they're simply making the best use of limited resources. But some lawmakers warn that the policies further incentivize people to cross the border illegally.

Of the nearly 370,000 removals carried out in fiscal 2013 by Immigration and Customs Enforcement, 94 percent of them fell into one of two categories -- illegal immigrants caught crossing the border, and illegal immigrants convicted of a crime in the U.S.

A report by Sessions' office drilled deeper into the data, finding that just 23,000 people were removed from the country last year who did not fall into those categories.

In the latest policy announcement, the administration is now seeking young lawyers to help provide legal assistance to children in immigration proceedings. Officials say about 100 lawyers and paralegals will be enrolled as members of AmeriCorps in a new division called "justice AmeriCorps." It's a partnership between the Justice Department and the agency that administers AmeriCorps, the Corporation for National and Community Service.

Further, the White House is seeking an additional $1.4 billion to handle the wave of unaccompanied children making the trek to the U.S., largely from Central America.

The administration reports that it is catching and removing more people caught illegally crossing the border than at the end of the George W. Bush administration. Further, the administration touts that the percentage of convicted criminals being removed is now at the highest level in five years.

The Obama administration is hardly the first to face complaints about its immigration enforcement policies. Up until 2006, the George W. Bush and prior administrations allowed a so-called "catch-and-release" practice where non-Mexican migrants were simply released -- many never showed up for their hearings and stayed in the U.S. In 2006, the Bush administration changed the policy so that non-Mexican illegal immigrants caught sneaking into the country would be held until they could be returned.

But illegal immigrant traffic from Central America is rising once again.

According to one estimate, the number of unaccompanied children caught on the southern border has exploded -- from 6,500 in 2011 to an estimated 90,000 this year, and nearly 150,000 projected for next year.

White House spokesman Josh Earnest noted Monday that FEMA has been tapped to lead a "government-wide effort" to address the influx of children, many of whom he said are "escaping abuse or persecution."

He clarified that facilities in Texas, Oklahoma and elsewhere are largely receiving the unaccompanied minors, while illegal immigrant families are being sent to Nogales, Ariz. He disputed criticism of the administration's enforcement record, saying that process is "as robust as ever."

"There's no doubt that the president understands that protecting our border security is a key component of our national security," Earnest said.

Asked about the influx from Central America, Santa Cruz County Sheriff Tony Estrada, in Arizona, said it has been fueled in large part by conditions in those countries -- "corruption, poverty and violence."

"I think they're trying to escape from all that," he said.

Estrada acknowledged the strong possibility that many of the migrants dropped off at bus stations will simply disappear. But some, he said, will probably stay in touch with immigration authorities, because they "feel that door is opening a little bit for them." He said "humanity usually calls for" more compassion toward women and children.

Regarding the busing of illegal immigrants in Arizona, ICE has said it does not want to lock up minors in detention centers or split up families.

According to ICE, the family units "will be released under supervision and required to report in to a local ICE office near their destination address within 15 days, where their cases will be managed in accordance with current ICE enforcement priorities."

Fox News' William LaJeunesse and Aalia Shaheed and The Associated Press contributed to this report.