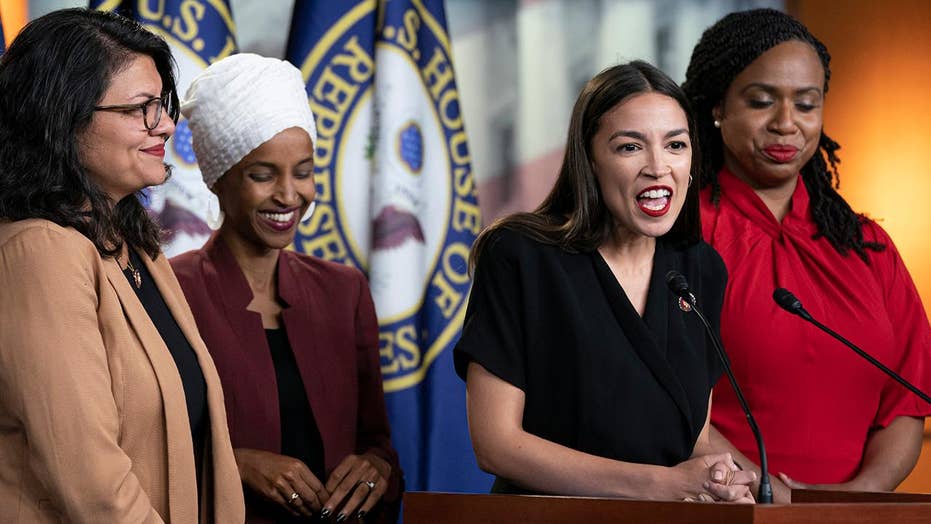 Is the 'Squad's' language on immigration resonating with voters?

Does 'children in cages' rhetoric work? Pollster Frant Luntz weighs in on 'The Ingraham Angle.'

Rep. Alexandria Ocasio-Cortez, D-N.Y., has taken another shot at President Trump amid their ongoing feud, saying he cannot conceive of an immigration system that didn't involve torture or hurting innocent people.

"He can’t conceive of a border where we don’t cage children or rip them from their parents," she said. "And to him, a lack of torture equals an open border. He literally cannot think of an immigration system where we don’t hurt innocent people, so I think that’s where he’s coming from there."

Her comments, published Friday in a video on journalist Nicholas Ballasy's YouTube channel, came in response to a question about Trump's claim that she wanted open borders.

"I think we're advocating for a humane border," she said. During her interview on Capitol Hill, she also called for an alternative to Immigration and Customs Enforcement (ICE) that would adhere to constitutional protections surrounding due process.

Ocasio-Cortez's statements came amid a raging debate in Washington over the future of immigration policy. Trump has blasted congressional Democrats for, according to him, refusing to act on the issue.

He specifically targeted Ocasio-Cortez and other freshman Democrats who vehemently denounced conditions for migrants under his administration. She and three others -- known as the "squad" -- also voted against a border funding package that Republicans argued would have improved those conditions.

On Friday, Trump called on Ocasio-Cortez and others for making "disgusting statements" that he claimed the media failed to cover. Media outlets, he said, unfairly focused their attention on controversial chants from audience members at his North Carolina rally on Wednesday.

"It is amazing how the Fake News Media became 'crazed' over the chant 'send her back' by a packed Arena (a record) crowd in the Great State of North Carolina, but is totally calm & accepting of the most vile and disgusting statements made by the three Radical Left Congresswomen," he tweeted.