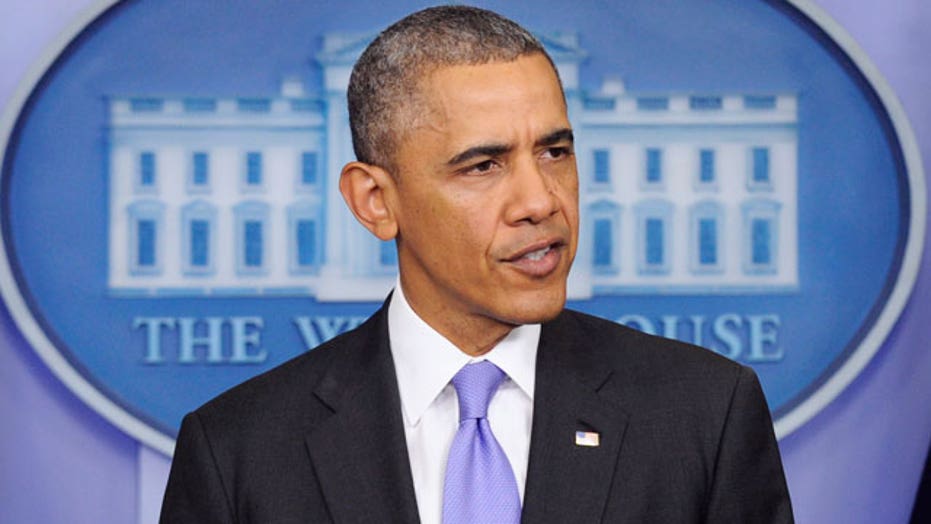 Obama on VA: 'If there is misconduct it will be punished'

President Obama, breaking his silence on the Veterans Affairs scandal, outlined steps Wednesday to "fix whatever is wrong" at the agency -- while stopping short of heeding calls to sack VA Secretary Eric Shinseki.

The president described Shinseki as a "great soldier" who has "put his heart and soul into this thing."

At the same time, Obama is bringing in the White House deputy chief of staff, Rob Nabors, to oversee a broader review. He dispatched Nabors on Wednesday to Phoenix, where allegations of patient deaths tied to delayed care first surfaced.

"We've got to do better," Obama conceded, while indicating he wants to wait for the conclusion of internal probes before addressing whether any more top officials should resign.

"When I hear allegations of misconduct ... I will not stand for it," Obama said. "None of us should."

He added: "If these allegations prove to be true, it is dishonorable, it is disgraceful and I will not tolerate it -- period."

Obama then followed up with a list of what he claimed are his administration's accomplishments in taking care of vets and their families.

The president had faced criticism for staying silent as allegations mounted that veterans died while waiting for care, and VA workers misrepresented treatment information -- and for rebuffing calls for the secretary to resign.

But the controversy is expanding. Before his public remarks, Obama met with Shinseki Wednesday morning along with Nabors in the Oval Office. And a source confirmed to Fox News that White House Chief of Staff Denis McDonough was heading to Capitol Hill Wednesday to consult with the chairman of the Senate Veterans Affairs Committee.

The Department of Veterans Affairs Inspector General's Office also said late Tuesday that 26 facilities are now being investigated nationwide over allegations of manipulated waiting times and other issues.

The development comes as the House of Representatives easily approved a bill Wednesday that would give the VA secretary greater authority to fire or demote senior executives. The vote was 390 to 33.

Rep. Jeff Miller, R-Fla., chairman of the House Veterans Affairs Committee, sponsored the measure, saying VA officials who have presided over mismanagement or negligence are more likely to receive bonuses or glowing performance reviews than any sort of punishment.

The VA's "widespread and systemic lack of accountability is exacerbating all of its most pressing problems," including revelations that the department maintained secret waiting lists to cover up long delays in patient appointments and a mounting toll of preventable deaths of veterans, Miller said.

Miller accused the VA of a "well-documented reluctance to ensure its leaders are held accountable for mistakes" and said Congress has an obligation to "give the VA secretary the authority he needs to fix things. That's what my bill would do."

The controversy erupted in Phoenix last month after allegations of delayed care that may have led to patient deaths and a cover-up by top administrators.

A former clinic director said that as many as 40 veterans may have died while awaiting treatment at the Phoenix hospital and that staff, at the instruction of administrators, kept a secret list of patients waiting for appointments to hide delays in care.

Investigators probing the claims say they have so far not linked any patient deaths in Phoenix to delayed care.

The current director of the Phoenix VA Health Care System, Sharon Helman, has been placed on leave indefinitely while the VA's inspector general investigates the claims raised by several former VA employees.

Meanwhile, two Republican senators introduced legislation to prohibit payment of bonuses to employees at the Veterans Health Administration through next year. Sens. Richard Burr of North Carolina and Deb Fischer of Nebraska said the VA should focus its spending on fixing problems at the agency, "not rewarding employees entrenched in a failing bureaucracy." Burr is the senior Republican on the Senate Veterans Affairs Committee and Fischer is on the Senate Armed Services Committee.

The House passed a bill in February that would eliminate performance bonuses for the department's senior executive staff through 2018.

Sen. John Cornyn, the No. 2 Republican in the Senate, also called on Obama to back off plans to nominate Jeffrey Murawsky to replace the VA's undersecretary for health care, Robert Petzel, who has stepped down. Murawsky, a career VA administrator, directly supervised Helman from 2010 to 2012.

The White House has said Obama remains confident in Shinseki's leadership and is standing behind Murawsky's nomination.