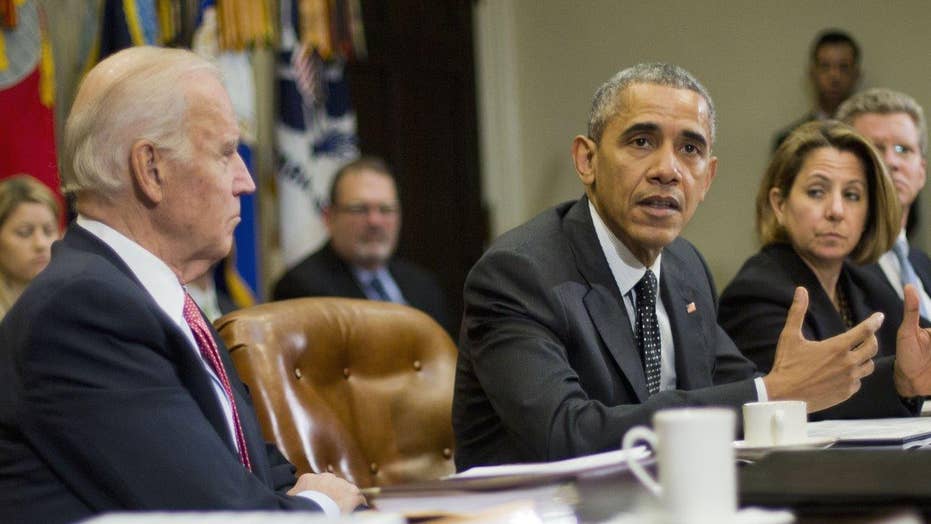 It didn’t take Republicans long to respond to President Obama’s record $4.1 trillion budget proposal – labeling it “a progressive manual for growing the federal government at the expense of hardworking Americans," as House Speaker Paul Ryan put it.

The fiscal 2017 budget plan, Obama’s eighth and final spending blueprint, is being met with a dead-on-arrival mentality on Capitol Hill after it was released late Tuesday morning.

As the president proposes a raft of new taxes, though, he’s also looking to drive the debate on cybersecurity and other big issues. One of the largest items is a request for $19 billion to combat cyber threats, an increase of $5 billion from last time.

Cybersecurity funding is an issue that has won bipartisan support from lawmakers in the past, and the appeal for funds comes amid mounting threats from China, Russia and beyond. After meeting with his national security team and cybersecurity advisers, Obama told reporters one of the biggest gaps between the government and private sector is information technology “and it makes everyone’s security vulnerable.”

But Republicans described the overall plan as a bid to grow government even bigger. In all, Obama's budget would increase taxes by $2.6 trillion over the coming decade, nearly double the $1.4 trillion in new taxes Obama sought and failed to achieve in last year's budget.

The president’s plan includes the controversial “oil fee” which would help pay for infrastructure projects including highways as well as lower the cost of clean energy. The “fee” – code for tax – would be phased in over five years. It tacks on a $10.25-per-barrel tax on crude, which GOP lawmakers have warned would amount to a tax on gasoline for drivers.

Major questions remain about the oil fee including how and when the fee would be charged as well as how the White House would collect the tax from an estimated 4 billion barrels of domestic and foreign oil once the plan is fully phased in in 2022. The tax would raise $319 billion over the next decade.

Obama also set aside billions for his new war on cancer as well as efforts to combat global warming.

The new spending plan for the budget year that begins Oct. 1 -- just 3 1/2 months before he leaves office -- is facing heavy fire from Republicans who hope to capture the White House. The proposal has dim prospects of winning approval in a GOP-controlled Congress.

House Democratic Whip Steny Hoyer, D-Md., complained that Republicans are not even inviting the White House budget director to testify on the plan.

"President Obama will leave office having never proposed a budget that balances -- ever," Ryan said, pledging that House Republicans would produce a budget that does reach balance in coming weeks.

“It’s not enough funding, and they’re cutting necessary programs, and they still don’t have a strategy,” he told The Hill. “Other than that, it’s fine.”

While Republicans insisted Obama's budget was dead on arrival, White House officials expressed hope they could obtain bipartisan support for a number of Obama's initiatives such as the effort to combat heroin and opioid addiction, fund a "moonshot" to find cancer cures and expand tax credits for the working poor.

Much of the problem stems from the surge in spending on the government's big benefit programs of Social Security and Medicare, which are forecast to soar with the retirement of millions of baby boomers.

The budget sees the economy growing at a 2.6 percent rate this year, though administration officials noted that projection was finalized in November, prior to the recent stock market slide. Inflation would remain low, registering a 1.5 percent gain this year.

Obama's new budget projects a deficit for the current 2016 budget year of $616 billion, sharply higher than the latest forecast by the Congressional Budget Office that this year's deficit would total $544 billion.

Both projections are above the actual deficit of $438 billion recorded last year, the lowest deficit total for Obama's presidency, a period when the deficits soared to above $1 trillion annually for four years as the government was buffeted by the worst recession in seven decades and a serious financial crisis.

Republicans have long complained that Obama has failed to attack the chief cause of future deficits, the soaring cost of entitlements. Previous Obama budgets did propose such things as slowing the automatic inflation increase for Social Security. But Obama abandoned those proposals when it became clear that Republicans were opposed to his suggestions to raise taxes on the wealthy as a way to reduce the size of the benefit cuts needed to improve the outlook for the benefit programs.

Obama's final budget has a playbook filled with ideas sure to appeal to Democrats: A "moonshot" initiative to cure cancer; increasing Pell Grants for college students from low-income backgrounds; renewed incentives for GOP-governed states to join the expanded Medicaid system established under the health care law, and incentives to boost individual retirement accounts.

The budget also pledges to make Americans safer in an increasingly dangerous world through higher military spending to fight the Islamic State terrorist threat and increased support for cybersecurity in the wake of last summer's hack of government computers that compromised the personal information of 21 million Americans.

The administration's $19 billion increase in cyber would boost spending to upgrade cybersecurity across government agencies, including $3 billion for an overhaul of federal computer systems.

The administration is again seeking to bolster funds for the Securities and Exchange Commission and the Commodity Futures Trading Commission, Wall Street regulators struggling to meet their heightened responsibilities following the 2008 financial crisis. The additional money would be used to fill obvious gaps in the agencies' oversight of investment advisers and clearinghouses for financial products, the administration says.

Separately, Obama has proposed $1.8 billion to combat the Zika virus, asking for the money immediately as emergency spending on top of the $1.1 trillion catchall spending bill that passed in December.