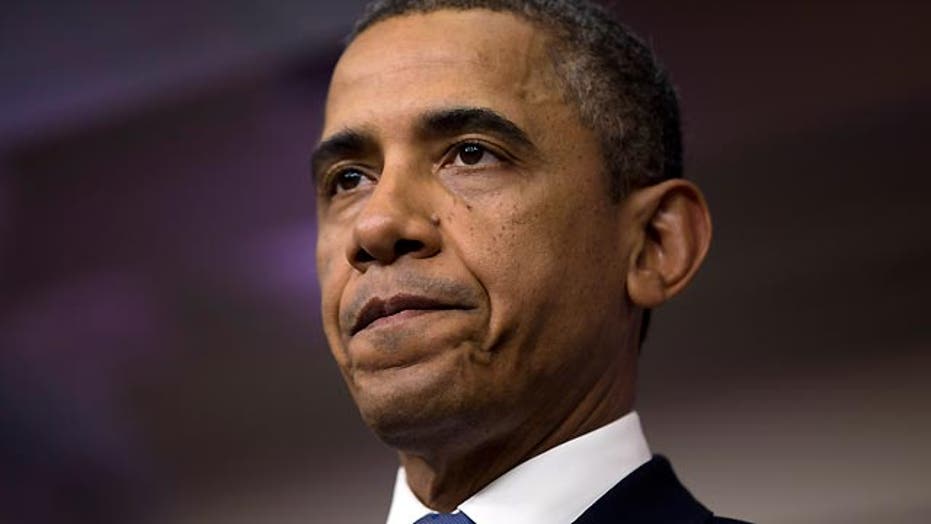 President Obama vowed Monday to bypass Congress and pursue unilateral changes to the country's immigration system, defying House Republicans who say his executive actions are part of the problem.

The president, speaking in the Rose Garden, said he is forced to go it alone because the House has failed to act on a comprehensive overhaul. He said Speaker John Boehner informed him last week the House will not vote on an immigration bill this year.

"America cannot wait forever for them to act," Obama said. He said he's launching a new effort to "fix as much of our immigration system as I can, on my own, without Congress."

The president's announcement is sure to infuriate congressional Republicans. Obama is pushing for new executive actions in defiance of Boehner's vow last week to pursue a lawsuit against the president over alleged executive overreach. Even before Monday's announcement, Boehner and his colleagues alleged that the president has gone too far in making changes without Congress to immigration policy, the Affordable Care Act, environmental regulations and other issues.

During his remarks in the Rose Garden, Obama cited the current surge of illegal immigrant children crossing the southern border and said the "crisis" should underscore the need to pass a comprehensive bill. But Boehner claimed that it was Obama's past executive orders -- those easing deportations for some illegal immigrants -- that "have led directly to the humanitarian crisis along the southern border."

Boehner said "additional executive action from this president isn't going to stem the tide of illegal crossings, it's only going to make them worse." He also referred to last week's Supreme Court ruling that Obama overstepped in making recess appointments, saying the court "reminded us" that there are "sharp limits" to presidential power.

As for his conversation last week with the president, Boehner said he only told Obama what he's been saying for months: that until the public and elected officials trust him to enforce the law, "it is going to be difficult to make progress on this issue."

Obama, though, said he would still prefer to seek changes via Congress, and he'd continue to press the House to act.

But for the time being, the president announced two steps. First, he's directed Homeland Security Secretary Jeh Johnson and Attorney General Eric Holder to move "available resources" from the interior to the border to address security. Further, the president said he's directed a team to "identify additional actions my administration can take on our own within my existing legal authorities to do what Congress refuses to do and fix as much of our immigration system as we can."

According to a White House official, those recommendations are due back by the end of the summer.

Obama's decision effectively declares that a broad based change in immigration policy is dead for the year, and perhaps for the remainder of his administration. Changing immigration laws and providing a path to citizenship for about 11 million immigrants in the country illegally has been one Obama's top priorities as he sought to conclude his presidency with a major second-term victory.

Meanwhile, the president is still grappling with the surge of illegal immigrant children and families along the border. Earlier in the day, Obama sent a letter to congressional leaders asking for more flexibility on that front, seeking increased powers to send unaccompanied children from Central America back from the U.S. border to the countries they're trying to flee.

Obama also asked for increased penalties for people who smuggle immigrants who are vulnerable, such as children. And he is asking Congress for emergency money that would, among other things, help conduct "an aggressive deterrence strategy focused on the removal and repatriation of recent border crossers." Obama's letter to Boehner, House Democratic leader Nancy Pelosi, Senate Majority Leader Harry Reid and Senate Republican leader Mitch McConnell says the administration is confronting the influx with a coordinated response on both sides of the border.

"This includes fulfilling our legal and moral obligation to make sure we appropriately care for unaccompanied children who are apprehended, while taking aggressive steps to surge resources to our Southwest border to deter both adults and children from this dangerous journey, increase capacity for enforcement and removal proceedings, and quickly return unlawful migrants to their home countries," Obama wrote.

The Border Patrol in South Texas has been overwhelmed for several months by an influx of unaccompanied children and parents traveling with young children from Honduras, Guatemala and El Salvador. Unlike Mexican immigrants arrested after entering the U.S. illegally, those from Central America cannot be as easily returned to their countries. Obama is seeking authority to act more quickly

The Border Patrol has apprehended more than 52,000 child immigrants traveling on their own since the start of the 2014 budget year in October.

Marielena Hincapie, executive director of the National Immigration Law Center, said the influx of children across the border "really requires a humanitarian response, not an increase in deportations."