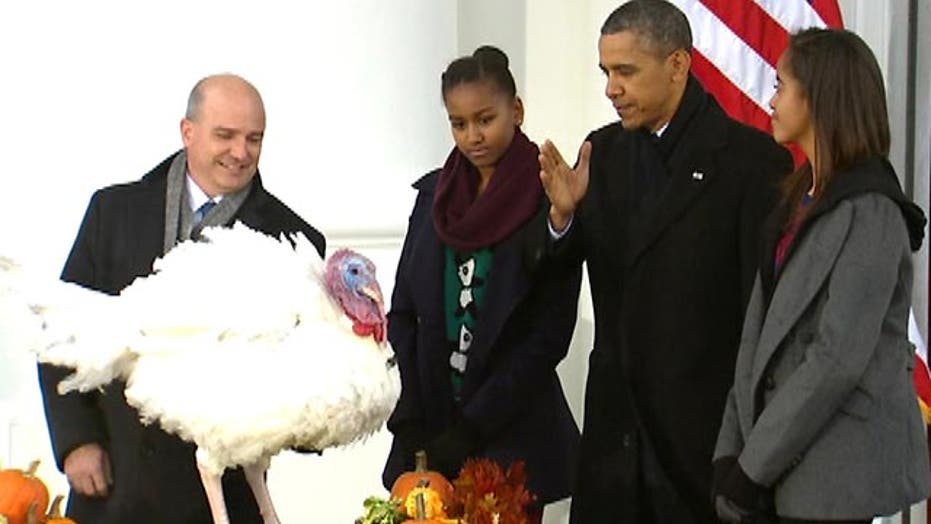 Annual tradition at the White House

WASHINGTON – President Obama on Wednesday continued a decades-long tradition of pardoning two Thanksgiving turkeys -- but if history repeats itself, the government gobblers might want to watch their step.

Pardoned turkeys, while treated to the luxe life as part of the annual tradition, historically have this unusual habit of dying soon after their time in the spotlight.

It's not exactly the curse of King Tut. But let's just say, they're only kept out of the deep fryer for so long.

Cobbler, last year’s pardoned turkey and Gobbler, the alternate, have both gone on to turkey heaven. In fact, only one of Obama’s pardoned birds has apparently lived long enough to see a second Thanksgiving.

"Gobbler passed away suddenly. It was very quick. We don't know what the illness was," Rebecca Aloisi, a spokeswoman at Mount Vernon in Virginia, told U.S. News and World Report in April.

This year's star fowl were treated to a 4-star experience – they were primped, plucked and even given paparazzi training before the main event.

The Minnesota-raised recipients, named Popcorn and Caramel, were paraded around the “black carpet” and have had hundreds of pictures taken of them.

While both animals were spared, Popcorn edged out Caramel for a face-to-face pardon with the president.

“The office of the president, one of the most powerful positions in the world, brings on many awesome powers and responsibilities,” Obama joked Wednesday afternoon. “This is not one of them.”

During their time in Washington, Popcorn and Caramel have spent their nights in style, staying at the swanky Willard Hotel in Washington where room rates run as high as $3,500 per night.

Both birds even have White House bios:

“Hatched on the same day on the farm of John Burkel near Badger, Minnesota, Caramel and Popcorn may have been raised together, but each has flown their own path,” according to the White House web site. “Caramel is a steady and deliberate bird that enjoys soybean meal and rocking out to Lady Gaga. When Popcorn is feeling peckish, he can't stop snacking on his namesake, corn, and has been known to strut around to Beyonce's 'Halo'."

For now, the diva-birds are soaking up the attention.

Based on previous pardons, they probably won’t last a year.

The short life spans of pardoned turkeys, though, could speak more to the way turkeys are bred than any particular misfortune associated with visiting the White House.

That’s because these big birds are bred for eating, not living. Their sole goal is to fatten up and take center stage on the dinner table. The lucky few who escape the Thanksgiving chopping block end up dying soon after because they are too big to live, experts say.

In the wild, turkeys grow to be about eight pounds whereas the average Thanksgiving turkey balloons to more than 20 pounds. According to Scientific American, by 22 weeks a slaughter-ready bird will have eaten about 116 pounds of feed.

A 2010 report for the Humane Society says that these one-time “Birds of Courage” are so fat that they have been turned into a “flightless gargantuan” that are “on the verge of structural collapse.”

“Their skeletons are often unable to adequately support such weight, leading to valgus-varus angular (‘knocked-kneed’) bone deformities, degenerative hip joint disease and up to 20 percent mortality due to lameness in problem flocks,” the report said.

Still, there may be other reasons why the birds die off so quickly.

John Burkel, president of the National Turkey Federation, and the man who raised Popcorn and Caramel, told reporters he played the turkeys John Mayer music on the farm.

While theories have been floated, there is no solid scientific research yet on whether that exposure will ultimately help or hinder the birds’ post-pardon life.