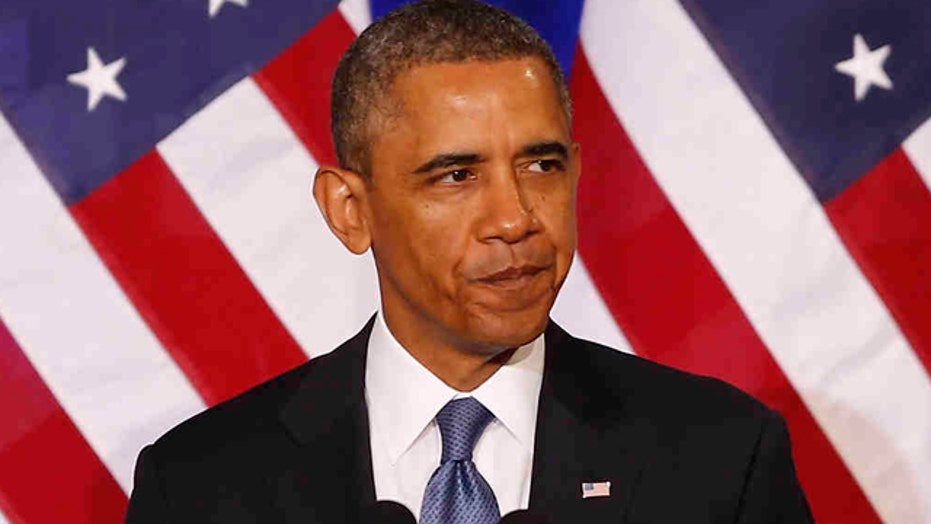 Obama: America must be vigilant in the face of threats

Trying to strike a balance between the government’s surveillance policies and the public’s civil liberties, President Obama announced a series of steps Friday that would end the National Security Agency’s ability to store phone data collected from millions of Americans.

However, Obama, speaking at the Justice Department, did not say the program would end -- only that the information collected would no longer be held by the NSA.

He also announced tighter restrictions on spying on international leaders.

"America’s capabilities are unique,” Obama said during the nearly 45-minute speech. “That places a special obligation on us to ask tough questions about what we should do."

Obama did not offer his own plan for where the NSA phone records should be moved and said instead he would call on the attorney general and members of the intelligence community to recommend a transfer point by March 28 – when the collection program comes up for reauthorization.

The president’s directive also requires intelligence agencies to obtain approval from a FISA court – a secret U.S. court that governs surveillance of terrorist and foreign espionage targets - before accessing the records.

“While I am encouraged the president is addressing the NSA spying program because of pressure from Congress and the American people, I disappointed in the details,” Sen. Rand Paul, R-KY, said in a written statement.

“I have concerns that requiring private companies to shoulder the burden for the NSA could simply shift privacy intrusions from the federal government to private companies,” he said. “Further discussions are needed in order to achieve a workable solution that protects Americans’ Fourth Amendment rights.”

"Shifting the storage of information does not address the fundamental problem: the collection of mass personal data in the first place," Hawkins said in a statement.

There appeared to be some initial confusion about Congress' role in authorizing any changes. An administration official said Obama could codify the data transfer through an executive order, while some congressional aides said legislation would be required.

Congress would have to approve a proposal from the president that would establish a panel of outside attorneys who would consult with the secretive Foreign Intelligence Surveillance Court on new legal issues that arise. The White House says the panel would advocate for privacy and civil liberties as the court weighed requests for accessing the phone records.

“The heads of state and government with whom we work closely, and on whose cooperation we depend, should feel confident that we are treating them as real partners,” Obama said. “The changes I've ordered do just that.”

Documents released by Snowden revealed that the U.S. was monitoring the communications of several foreign leaders, including German Chancellor Angela Merkel. The revelations outraged Merkel as well as other leaders, and U.S. officials say the disclosures have damaged Obama's relations around the world.

Obama also said the government could no longer request data beyond two people away from the terrorist target.

He also said that ‘dozens’ of foreign leaders would be safe from NSA surveillance techniques but did not offer that protection to their advisers.

Sen. John McCain, R-Ariz., said he would introduce legislation to create a special Senate committee to examine the issues and exercise congressional oversight.

"Recent disclosures of these activities and practices have caused grave damage to the United States," McCain said in a statement. "They have harmed our relations with friends and allies and harmed our ability to combat threats to the United States. It is more important than ever for Congress to exercise effective oversight and, where necessary, to enact legislation to address these issues which are vital to American national security."

The Associated Report contributed to this report.