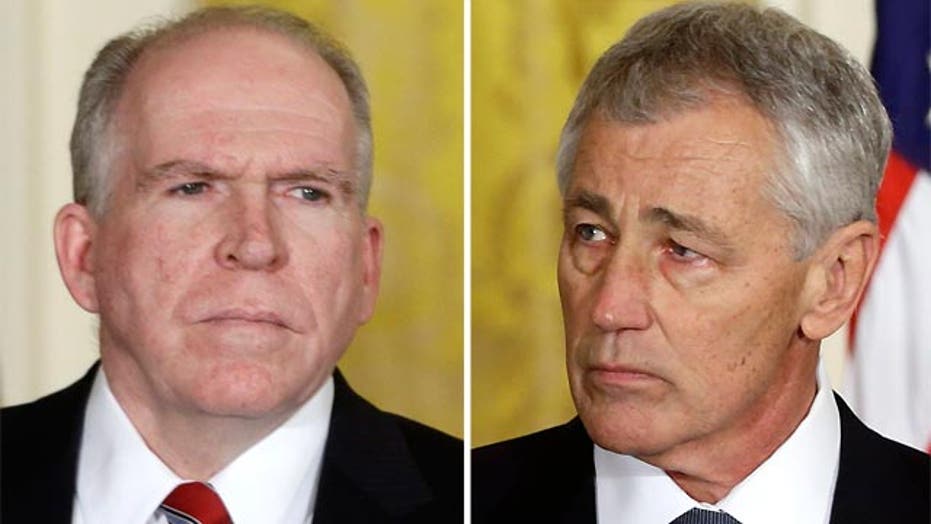 Why all the controversy over Obama’s cabinet nominations?

President Obama nominated two controversial officials for his second-term national security team on Monday, teeing up what could turn into a confirmation battle shortly after the inauguration.

The president nominated former Sen. Chuck Hagel for defense secretary and White House counterterrorism adviser John Brennan for CIA director. The president touted the credentials and years of service each would bring to their respective posts.

On Hagel, Obama said the troops would "see one of their own" at the helm of the Pentagon. Hagel is a Vietnam combat veteran, and the president stressed that Hagel would be the first Vietnam vet to lead the department if confirmed.

"Chuck Hagel is the leader that our troops deserve. He is an American patriot," the president said.

Yet each nominee is poised to attract tough bipartisan criticism -- and perhaps opposition -- during the confirmation process. While Obama went the relatively safe route with his pick for secretary of state, tapping Massachusetts Sen. John Kerry, his choices for his national security team could cause a ruckus on Capitol Hill.

On Sunday, several Republican senators suggested they would have problems with Hagel, while Senate Republican Leader Mitch McConnell said he is reserving judgment. Republicans question Hagel's commitment to Israel and his toughness when it comes to Iran. But Hagel also has come under fire from gay rights groups for saying in 1998 that a nominee for an ambassador post was "openly, aggressively gay."

He has since apologized for those comments. Gay rights group GetEQUAL, though, panned the apology as "hollow" and "politically expedient."

Texas Sen. John Cornyn had the most strident remarks, saying Obama nominating Hagel sends "the worst possible message" to Israel and other U.S. allies in the Middle East, citing in part Hagel's views on Israel and his opposition to Iranian sanctions. He did not say whether he would try to block Hagel's potential nomination during a Senate confirmation hearing.

Newly-elected Texas Sen. Ted Cruz also told "Fox News Sunday" that "it is very difficult to imagine the circumstance in which I could support his confirmation."

Other lawmakers and groups, though, described Hagel as a solid pick. Senate Armed Services Committee Chairman Carl Levin, D-Mich., described him as a "strong advocate for the men and women of our military."

Veterans of Foreign Wars, without recommending whether he should be confirmed, called him "uniquely qualified."

Hagel, a 66-year-old moderate Nebraska Republican, has criticized discussion of a military strike by either the U.S. or Israel against Iran. He also irritated some Israel backers with his reference to the "Jewish lobby" in the United States. And he has backed efforts to bring Iran to the table for future peace talks in Afghanistan.

McConnell told ABC's "This Week" that Hagel has "certainly been outspoken in foreign policy and defense over the years. The question we will be answering, if he's the nominee, is do his views make sense for that particular job?"

"This is a controversial pick," Sen. Lindsey Graham, R-S.C., told CNN. "He is an antagonistic figure when it comes to the state of Israel. It's a signal you're sending to Iran at the worst possible time and to our allies."

Officials close to the White House have talked up Hagel as a patriot who served in the military with distinction during Vietnam and someone who shares the president's skepticism about potential conflict with Iran and a large U.S. footprint in Afghanistan.

Brennan, meanwhile, is a 25-year CIA veteran who, during the George W. Bush administration, served as director of the National Counterterrorism Center. Despite his credentials, Brennan has faced criticism from both sides of the aisle, as well.

In 2008, he removed his name from consideration for the CIA's top job amid concerns on the left about his connection to enhanced interrogation techniques.

In a letter to Obama at the time, Brennan said he was "a strong opponent of many of the policies of the Bush administration, such as the preemptive war in Iraq and coercive interrogation tactics, to include waterboarding." White House officials say they don't expect Brennan to face similar trouble this time around given his four years of service in the Obama administration.

"The issue has been removed from the debate because the president and John Brennan, as his top counterterrorism adviser, brought those techniques to an end," Ben Rhodes, Obama's deputy national security adviser, said.

Brennan, though, also has defended the legality of the U.S. drone program, another issue that could come up during confirmation. And following the 2009 Christmas Day bombing attempt, Brennan agitated Republican lawmakers by defending the decision to read the bombing suspect his Miranda rights.

If confirmed, Brennan will succeed David Petraeus, who resigned in November after admitting to an affair with his biographer.

The Obama administration defends Brennan as a candidate with deep knowledge of the CIA's inner workings, and notes he has been on the front lines for more than a decade in the fight against Al Qaeda -- including involvement in the decision to launch the raid against Usama bin Laden.