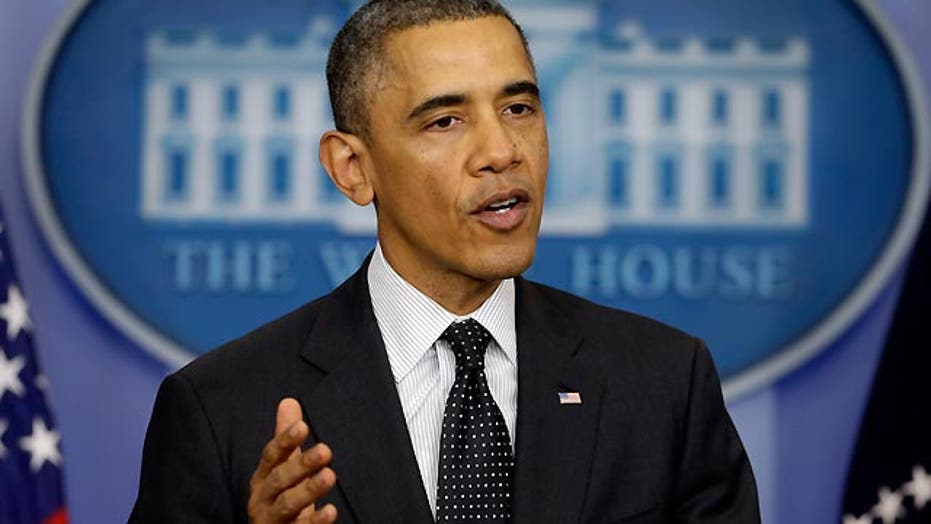 Obama, even invoking former President Bush, said it's critical to "change the way that Washington is doing business."

But Republicans and even some Democrats warned that the Senate may have just opened a Pandora's box -- and with little debate, approved a change that could haunt the chamber for years to come.

"This was nothing more than a power grab," Senate Minority Leader Mitch McConnell said.

In a rapid-fire set of developments on Thursday, the Senate narrowly approved a rule change that would limit the ability of the minority party to block key presidential appointments. Instead of needing 60 votes to break a filibuster, Democrats will now need only 51.

Speaking Thursday from the White House briefing room, Obama said the change was needed to deal with Republicans' "unprecedented pattern of obstruction." He cited the record of George W. Bush, claiming his predecessor had an easier time getting nominees confirmed.

Obama cited, among other stand-offs, the bid by Republicans to filibuster his nomination of Chuck Hagel, a former GOP senator, for Defense secretary.

"For the sake of future generations, we can't let it become normal," he said.

Republicans, though, argued that while it took Bush an average of 211 days to get a nominee confirmed, it's taken Obama 228 days -- just 17 days more. Judicial nomination statistics show that Obama has a confirmation percentage of 76 percent -- though majority leaders have had to try to break a filibuster far more in the last five years than in recent decades.

Following the vote Thursday, even some Democrats emerged as tough critics of the decision.

While Republicans were furious that their ability to hold up appointments had been scrambled, moderate Democrats were concerned more about how Reid was able to pull off the maneuver.

Sen. Mark Pryor, D-Ark., one of three Democrats who opposed the move, said it could "permanently damage" the Senate.

"This institution was designed to protect -- not stamp out -- the voices of the minority," he said.

Reid used what is known in Senate slang as the "nuclear option." To change Senate rules of this kind, it typically takes 67 votes. But Reid used a highly controversial shortcut and did it with just 51 votes.

"Changing the rules, in violation of the rules, by a simple majority vote is not a one-time action," he warned. "If a Senate majority demonstrates it can make such a change once, there are no rules that bind a majority, and all future majorities will feel free to exercise the same power, not just on judges and executive appointments but on legislation."

Levin argued that the move opened the floodgates for the majority to change important rules on a whim going forward.

"Today, we once again are moving down a destructive path," he said. "Pursuing the nuclear option in this manner removes an important check on majority overreach which is central to our system of government."

Levin made clear that he thinks Republicans were acting irresponsibly by blocking Obama's judicial nominees, and supports getting those nominees an up-or-down vote.

But he said there were other ways for Reid to achieve that, including by forcing GOP foes to stage an old-fashioned filibuster on the floor.

Sen. Joe Manchin, D-W.Va., was the other Democrat to oppose the rule change.

The filibuster, for better or worse, has been a defining feature of the Senate for decades. While this makes the Senate one of the slowest-moving legislative bodies in the world, it also prevents legislation and appointments from moving too fast.

The vote on Thursday vastly reduces the power of the minority to stall nominations and makes it easier for federal judges to get lifetime appointments. The move would not affect Supreme Court nominees.

The late Sen. Robert Byrd, D-W.Va., presented a powerful case against changing the rules back in 2010, when he said doing so would "destroy the uniqueness of this institution."

"In the hands of a tyrannical majority and leadership, that kind of emasculation of the cloture rule would mean that minority rights would cease to exist in the U.S. Senate," he said.