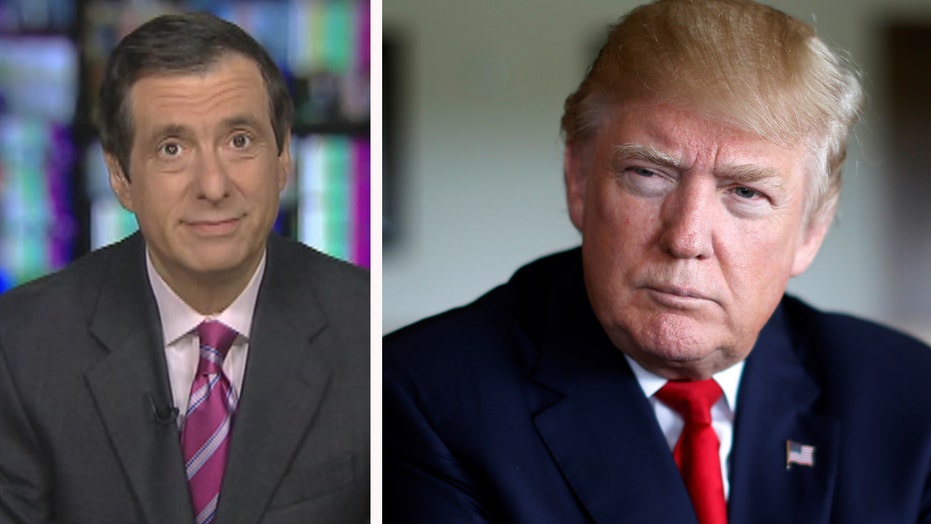 Kurtz: Trump vs the 'phony polls'

Donald Trump, who loved to tout the polls when he was winning, is now accusing the media of pushing “phony polls.”

But even some of his own people aren’t backing him up.

Trump says he’s winning this election, even though most public polls show him losing nationally and in many of the key battleground states. The coverage is all about how big Hillary Clinton’s margin of victory will be and how she’s now turning her attention to helping Democratic congressional candidates. “Victory in Sight,” said a New York Times headline.

Here’s why it matters. Trump is right that if the country believes the race is essentially decided, some deflated Republican voters may stay home. (Of course, some Democrats may also stay home if an ultra-confident Clinton camp acts like this thing is in the bag.)

But for Trump’s allegations to be true, the surveys by New York Times/CBS, Wall Street Journal/NBC, Washington Post/ABC, Politico/Morning Consult, Fox News, CNN, Quinnipiac and others would have to be distorted.

There are three polls—L.A. Times, Rasmussen and IBD—that have given Trump a national lead of 1 to 3 points in recent days, or a virtual tie. So they would have to be right and the other surveys wrong.

All this plays into Trump’s broader argument about a crooked system. “When the people who control the political power in our society can rig investigations like [Clinton’s] investigation was rigged, can rig polls -- you see these phony polls -- and rig the media, they can wield absolute power over your life, your economy and your country and benefit big time by it,” he said the other day in Florida.

But his campaign manager, Kellyanne Conway, has acknowledged her candidate is “behind” in the polls. Ed Rollins, head of a Trump Super PAC and a Fox News contributor, said yesterday that “if the election were today, he’d lose and lose big time…They know it.”

The Electoral College projections are more damaging for Trump. Fox’s map gives Clinton 307 electoral votes, more than the 270 she needs to win.

And each new survey generates a new round of stories. Just yesterday, the New York Times said its poll had Trump trailing by 7 in North Carolina, without which it’s extremely difficult for him to win the White House. Another headline said, “Could Clinton Win Texas? Democrats Say Maybe.” (It’s still highly unlikely.)

“Florida Spirals Away from Trump,” says a Politico story, with Clinton leading there in 10 of the last 11 public polls.

Now some caveats are in order. Individual polls can be off. Democrats can be oversampled. Fewer people have land lines or want to spend time talking to pollsters. Trailing candidates can surge.

And outside events can intervene. The news that ObamaCare premiums will rise an average of 25 percent, and that consumers are being left with fewer insurance options, gives a strong argument to Trump and other critics of the federal program.

Are such issues enough to change the dynamic of what is now a two-week campaign, with the conventions and debates behind us? It’s an uphill climb for Trump.

And by the way, many trailing candidates in both parties, in an effort to fire up their base, question the polls or declare that the only poll that counts is on Election Day (a little less true in this age of early voting).

The difference is that Trump is saying the majority of polls aren’t just wrong but deliberately off base.

And he has a receptive audience. In a Reuters survey, almost 70 percent of Republicans said a Hillary win would be the result of rigged voting or voter fraud.  In an ABC poll, 84 percent of Trump supporters say the same. (That is, if these polls can be believed.)

Whether Trump is trying to shake up the race or give himself a post-defeat rationale, he’s made the media’s polling—usually taken for granted as a rough barometer of public sentiment—a major issue in the home stretch.