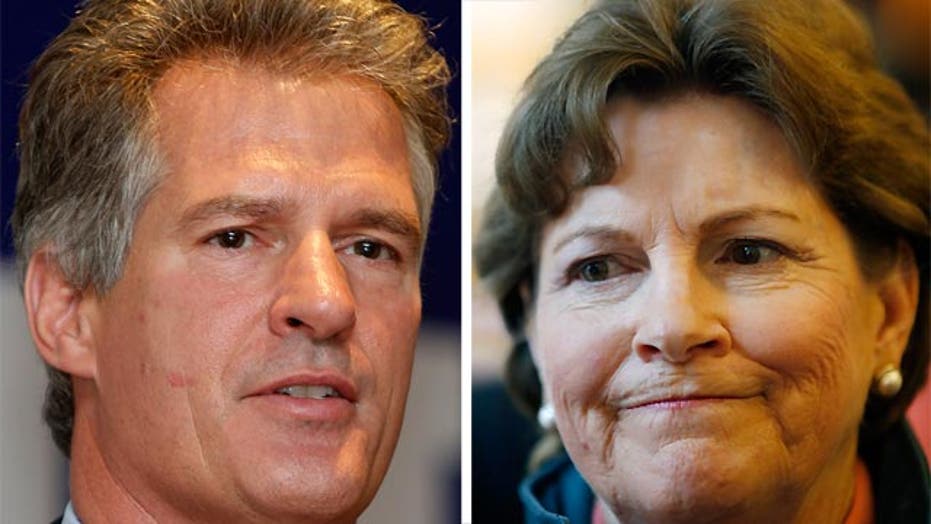 Inside the battle in the Granite State

A tightening Senate race in New Hampshire is bringing with it an onslaught of negative ads and campaign-trail recriminations, as Republican Scott Brown closes the gap against incumbent Sen. Jeanne Shaheen.

Brown, who had been trailing in the polls by roughly 10 points over the summer, has narrowed the Democrat's lead to single digits -- the Republican nominee even led by a point in one recent survey, representing a statistical tie.

In the closing weeks, voters have been besieged with ads. Millions of dollars are being spent by third-party interests to blanket the airwaves. This, by itself, has led to more recriminations on the campaign trail.

Shaheen blamed Brown for the outside influence, faulting him for not taking the "people's pledge" from his past race in Massachusetts to "shut down third party money."

Despite lamenting the outside influence, Shaheen, who's also the former governor of New Hampshire, is in the fight of her political career and hasn't shied away from her own hard-hitting commercials. Her ads are slamming Brown on women's issues, while working to tie him to big oil and Wall Street money.

She rarely misses an opportunity to link her opponent to his onetime home state, peppering campaign speeches and interviews with the 'M' word: Massachusetts.

Brown indeed represented Massachusetts in the Senate until losing the seat in the last election, and is eyeing a Granite State victory to reestablish his political career. Bringing in big names, like former Republican presidential nominee Mitt Romney -- who's been in demand among Republican candidates nationwide -- is part of the strategy.

But Brown bristles at the suggestion he's gone negative.

"I have not run negative ads. I'm Scott Brown and I stand behind my messages," he insists, pointing out that both he and his opponent have spent time in Washington. "I am going to draw distinctions and I hope the people of New Hampshire understand that we can talk about our records because we served together."

Brown's camp is running ads that work to tie Shaheen to President Obama's record, saying she votes with him 99 percent of the time.

"We'll see once again if in fact people care about the direction of our country, re-establishing that New Hampshire advantage, making sure they have true independent leadership versus somebody who's been a rubber stamp," Brown said.

With less than three weeks until Election Day, some political experts believe negativity could be the key to winning.

"It's the proper tactic to take," said Professor Andrew Smith, director of the University of New Hampshire Survey Center. "It's an unpopular thing, but negative ads are designed to keep the opposing parties' voters, especially those moderate voters, designed to keep them home."

Just a day after Romney stumped for Brown, Shaheen welcomed former President Bill Clinton to the state hoping the popular campaigner would rally a base that must show at the polls for Shaheen to win.

Smith said Obama's unpopularity is still the big factor. "I think what we're looking at this year -- is this going to be really bad or horrific for Democrats?" he said.