He's been in office just a few days, but new California Democratic Gov. Gavin Newsom has already gone after President Trump, accusing him of playing “games with lives” for halting aid to the state for dealing with deadly forest fires.

Trump drew the fury of the newly sworn-in governor after ordering the Federal Emergency Management Agency (FEMA) to stop sending money to California “unless they get their act together,” accusing the Golden State of poor forest management.

“Billions of dollars are sent to the State of California for Forest fires that, with proper Forest Management, would never happen,” Trump tweeted. “Unless they get their act together, which is unlikely, I have ordered FEMA to send no more money. It is a disgraceful situation in lives & money!”

This prompted Newsom -- who during his inauguration address Monday called Trump incompetent and vowed to double-down on California’s efforts to provide sanctuary to illegal immigrants -- to slam the president over the order.

“Mr. President -- Just yesterday, @OregonGovBrown, @GovInslee, and I sent a letter asking the federal government to work with us in taking on these unprecedented wildfires. We have been put in office by the voters to get things done, not to play games with lives,” Newsom wrote, referring to the governors of Oregon and Washington state, who are also Democrats.

“Disasters and recovery are no time for politics. I’m already taking action to modernize and manage our forests and emergency responses. The people of CA -- folks in Paradise -- should not be victims to partisan bickering,” he added in another tweet.

November's wildfire in the Northern California town of Paradise was the deadliest in the U.S. in a century, killing at least 85 people and destroying nearly 14,000 homes.

The feud with Trump comes amid Newsom’s indication that he will abandon fiscal restraint embraced by his predecessor Jerry Brown and his proposal on Tuesday to fork out an additional $105 million on wildfire safety – an increase from the confirmed $200 million the state’s Legislature already set aside.

“Broad strokes, we are stepping up our game. I hear you, I get it, we have to do more,” he said.

Last year, Trump blamed the wildfires on poor forest management and threatened to deny funds to California unless they reform it.

The president told “Fox News Sunday” in November that while the firefighters did well to stop the wildfire, “big problem we have is management.” 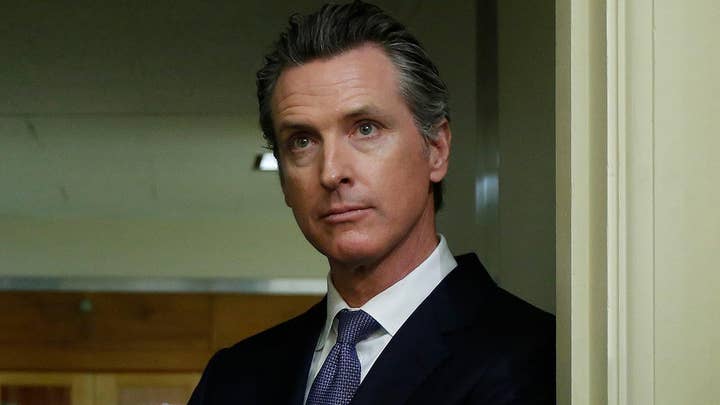 Following the election victory, Newsom has emerged as a leading anti-Trump governor in the country, issuing a number of attacks, even during his inauguration speech -- an occasion that traditionally emphasizes a message of unity.

“There is an administration in Washington that is clearly hostile to California and California’s interests,” Newsom said Monday.

“There is an administration in Washington that is clearly hostile to California and California’s interests.”

“What we do today is even more consequential, because of what’s happening in our country,” Newsom continued during his address. “People’s lives, freedom, security, the water we drink, the air we breathe — they all hang in the balance. The country is watching us. The world is waiting on us. The future depends on us. And we will seize this moment.

"We will offer an alternative to the corruption and incompetence in the White House,” the governor added. “Our government will be progressive, principled, and always on the side of the people.”