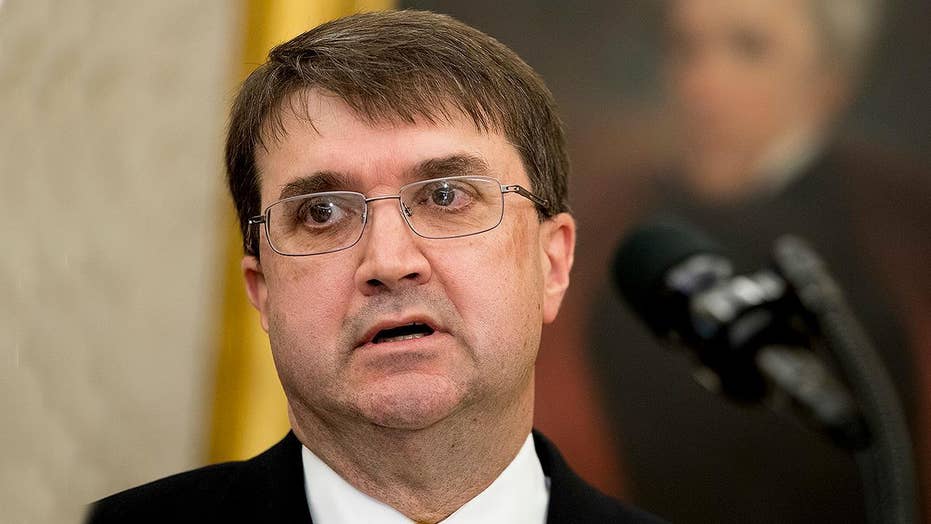 On 'Special Report,' the newly sworn in Veterans Affairs secretary talks to Jennifer Griffin about the challenges he faces.

EXCLUSIVE: President Trump’s newly installed Veterans Affairs secretary, in his first interview since taking office earlier this week, sounded the alarm about the need to fix a critical program allowing veterans to see local private doctors instead of driving long distances to a VA hospital.

For Wilkie, it’s among the most pressing in an array of challenges he confronts upon taking the helm at the government’s second-largest department – and perhaps its most scandal-scarred.

'If we don’t get a hold of what we owe Americans who are providing services to our veterans, then the entire system collapses.'

From his office perch two blocks from the White House, Wilkie surveyed the task ahead and homed in on the popular private-doctor program used by millions of veterans. He told Fox News he has promised the president he will address one glaring problem in particular: doctors getting stiffed by the VA.

“The Veterans Affairs Department in the last eight to nine years has not been paying those bills to small-town doctors, to community hospital emergency care facilities,” he said.

At issue is a program that was revamped under this administration.

In June, Trump signed a bill to replace the troubled Veterans Choice Program, enacted in 2014 under then-President Barack Obama, to expand access for veterans wishing to see private doctors and other providers to ease the burden on families forced to drive long distances for VA care.

“It makes no sense to me that we require someone to travel -- let's use a state like Montana -- where the distances are enormous, 600 or 700 miles round trip,” said Wilkie. “They pass a lot of doctors along the way. We need to bring those doctors into the Veterans Affairs system.”

Wilkie said, though, if they can’t fix the doctor payment issue and “if we don’t get a hold of what we owe Americans who are providing services to our veterans, then the entire system collapses.”

That’s just the start to his challenges at the sprawling department.

The VA has suffered from a series of high-profile scandals in recent years involving secret wait-lists, systemic neglect and even veterans dying while waiting to see a doctor. Wilkie is the fourth secretary to lead the VA in the past four years.

The VA’s $200 billion budget has doubled in the past decade. The new secretary said of the 370,000 employees under that network, “there are probably 100 bad eggs” in the system still.

One of the first things Wilkie vowed to turn around, though, is a perceived morale problem at the agency that’s supposed to serve 9 million veterans.

"This is an institution that has been buffeted by continuous body blows for a number of years," Wilkie admitted. 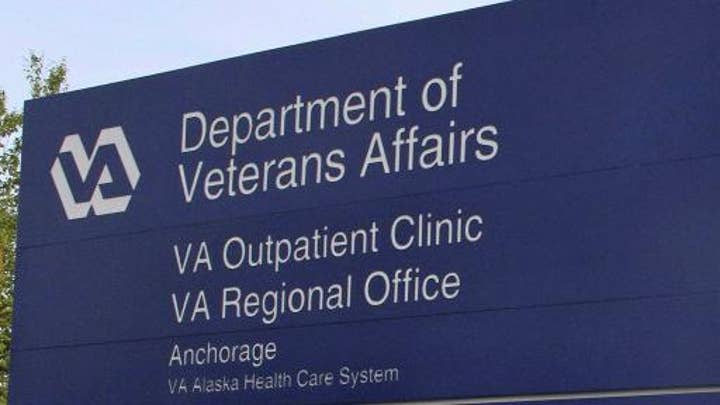 To tackle the problem, Wilkie plans to be more visible not only at headquarters in Washington but VA hospitals throughout the country. Wilkie said he spent his first day-and-a-half as secretary walking the halls to meet staff, and is joining them for meals in the cafeteria.

“I don't think those simple things have been done,” Wilkie said. “I fall back on my military life. I learned at a very early age, listening to those around my family, that in order to be a commander you had to walk your post.”

Wilkie is the son of an Army field artillery commander, severely wounded after multiple tours in Vietnam.

“He spent a year in Army hospitals. He came back to us weighing about half of what he did when he left. I watched his recovery. It was agonizing,” Wilkie recalled.

So he knows firsthand the struggles of families whose sons and daughters are amputees from the wars in Iraq and Afghanistan, some of whom have been denied wheelchairs because of sloppy paperwork.

“It’s a culture in some respects that just looks at a patient as just a generic number coming through the system,” he said. “And that's not the way it should be.”

Wilkie said amputees and other severely wounded combat vets “need to be at the front of the line.”

Asked to pledge to get rid of a widely criticized process forcing amputees to make repeated trips to the VA to prove they’re still an amputee, Wilkie replied, “Absolutely.”

Wilkie also sought to clear the air on Democratic senators’ suggestions that the administration is eyeing a privatization of the whole system. 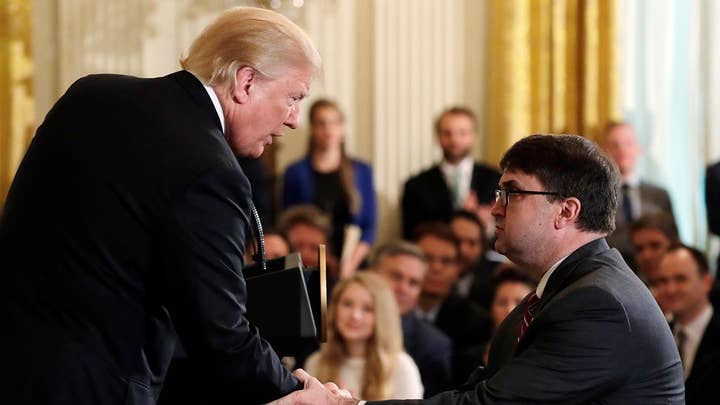 At his confirmation hearing on Capitol Hill weeks after Trump signed the $55 billion bill to fix Veterans Choice, Wilkie faced a hostile reception from Democratic senators demanding to know if he planned to do just that, something Wilkie’s predecessor said was the reason for his firing—not moving to privatize fast enough.

In the interview with Fox News, Wilkie noted such a move would need support from Capitol Hill and said the agency’s growing budget does not reflect a move to privatize.

Pressed on whether Trump has set that as a goal, Wilkie said, “No. The president wants to deliver the best care possible.”

Wilkie also downplayed a Washington Post report that he is planning to sideline Trump loyalists who have purged longtime VA staff since his predecessor was fired.

“No. In fact, I haven't removed anybody,” Wilkie replied, but wouldn’t rule out doing so in the future. "As part of any new leadership organization, you come in with a team. You come in to assess. You come in to rearrange."

Firing those who have given the VA a bad name has proved a challenge.

Last year, a disgraced former director of the Washington, D.C., VA had to be rehired just one month after being fired – even though, under his watch, it was found that inventories were so mismanaged that doctors had to run out mid-procedure and borrow from neighboring hospitals while patients were under anesthesia.

“The laws now give you the authority to override most of what I would consider to be the normal bureaucratic protections for those in those situations,” Wilkie said.

Another problem is the loss of talent at the VA. As of March 8, 2018, the VA had 33,642 total full-time-equivalent vacancies across the department, for a vacancy rate of 8.45 percent.

Wilkie served as undersecretary of defense for personnel and readiness under Defense Secretary Jim Mattis before being tapped by Trump to lead the VA, after the president ousted Dr. David Shulkin in late March.

Asked if he was worried he might suffer the same fate as his predecessor, fired by tweet, Wilkie replied, “No, the last thing I will pay attention to is any of the usual Washington back and forth. This president has been magnificent to me.”

Wilkie also served in the Pentagon under Donald Rumsfeld, worked for Condoleezza Rice and had years of experience on Capitol Hill working for Sens. Thom Tillis and Trent Lott.

In his new office, Wilkie now hangs a portrait of Gen. Omar Bradley, the first secretary of Veterans Affairs after World War II, and has chosen Bradley's desk as his own.

"Bradley was tasked with changing VA to accommodate 11 million soldiers coming off active duty and into VA ranks,” he said. “He was really a visionary.”

Fast-forward to modern times, and the VA is still grappling with similar challenges, absorbing the soldiers who have come home from two wars stretching back nearly two decades.

Wilkie ended the interview with a message to those veterans: “Something that people need to know: We don't turn veterans down. A private facility might; we don't.”