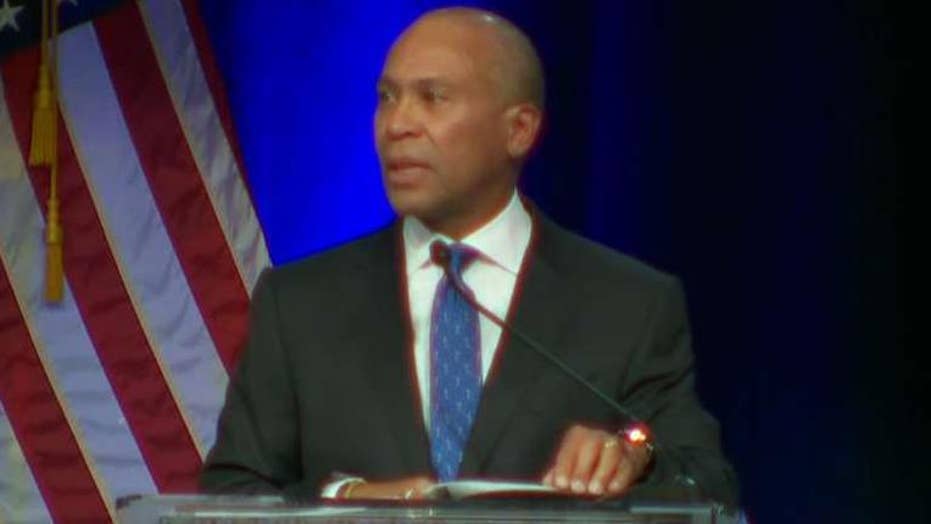 MANCHESTER, N.H. – Newly declared Democratic presidential candidate Deval Patrick insisted this week on a visit to New Hampshire that the battle for his party’s nomination is “a wide-open race.”

While he faces long odds, a new poll in the state that holds the first primary in the race for the White House appears to at least back up his claim.

PATRICK: 'I DON'T THINK YOU HAVE TO HATE REPUBLICANS TO BE A GOOD DEMOCRAT'

The Suffolk University survey for the Boston Globe showed just over 21 percent of those questioned said they were still undecided. And of those currently backing a particular candidate, 53 percent said they could change their minds before the February primary.

“This race is still up for grabs,” Suffolk University Political Research Center director David Paleologos said in a statement.

The Suffolk University survey likewise indicates no clear front-runner for the Democratic nomination -- with the top four contenders for the nomination all in the mid-teens.

Everyone else in the large field of Democratic White House hopefuls is in the single digits, with just over two months to go until the state's Feb. 11 primary. Patrick stood at 1 percent in the survey.

The survey’s far from an outlier. A RealClearPolitics average of the four most recent polls in New Hampshire puts Warren at 19 percent, Biden and Buttigieg at 17 percent, and Sanders at 15 percent, with the rest of the candidates in single digits.

The polls also dispel the notion that Sanders and Warren would have a clear advantage over the rest of their rivals thanks to their proximity to the Granite State.

“Any candidate that is thinking of skipping New Hampshire because of all the local candidates would be making major mistake,” Paleologos noted.

Patrick, who like Warren can make the short drive from Massachusetts to campaign in New Hampshire, acknowledged that “as a practical matter, we’re going to try to spend a lot of time here in New Hampshire and in South Carolina.”

The first black governor of Massachusetts also hopes to build support in South Carolina, where black voters make up a majority of the state's Democratic presidential primary electorate.

Paleologos noted that a majority of those backing Sanders, Warren, and Buttigieg offered that it was too late for Patrick to get into the nomination race, but that a majority of voters supporting Biden said they would be open to considering Patrick.

Pointing to those voters supporting the former vice president, Paleologos noted, "That’s who the former Massachusetts governor needs to go after…and that’s an even more encouraging sign for Patrick."