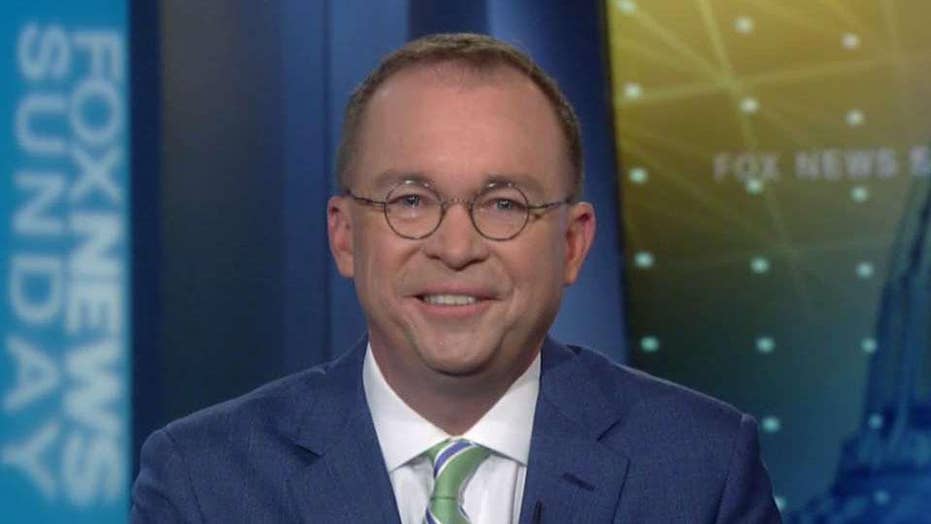 Acting White House Chief of Staff Mick Mulvaney reacted to the aftermath of Robert Mueller's testimony and a new push for investigating President Trump by claiming it is simply House Judiciary Chairman Jerrold Nadler, D-N.Y., trying to keep his job.

Nadler is facing a primary challenge from Lindsey Boylan, a progressive candidate looking to do to him what Rep. Alexandria Ocasio-Cortez, D-N.Y., did to House veteran Joe Crowley. Boylan has called for Trump's impeachment, and Mulvaney thinks Nadler is now doing the same in an effort to stave off the threat from the left.

MARK PENN: MUELLER'S TESTIMONY AND INVESTIGATION ARE OVER -- THIS IS THE SERIOUS THREAT WE NOW FACE

"He is falling over himself to become more and more progressive, in order to try and keep his job and not lose to the next AOC" Mulvaney said.

Nadler said after Mueller's testimony that "there appears to be compelling evidence of the president's misconduct outside of the four corners of the redacted version of Mueller report, and we will work to uncover that evidence as well." Mulvaney said that Nadler also told people he has initiated an impeachment inquiry.

"This is not over in their minds, which is just bizarre given what happened this week," Mulvaney said, referring to Mueller's hearing. Trump and fellow Republicans touted the hearing as a victory due to Mueller's lackluster performance in the face of scrutiny from GOP questioning, and a lack of new information to support Democrats.

Mulvaney also criticized Mueller's comments regarding obstruction of justice, and how the report said he did not "exonerate" Trump.

"You don't get exonerated, you are innocent until proven guilty," Mulvaney said. "This is over."

Mulvaney also came to President Trump's defense in the wake of recent accusations of racism from Democrats. Trump criticized Rep. Elijah Cummings, D-Md., for not doing enough to help his Baltimore district, saying conditions there are worse than those at the southern border. Trump's language drew criticism from Democrats, including House Speaker Nancy Pelosi and Sen. Elizabeth Warren, D-Mass.

Mulvaney claimed that Trump's criticism of Rep. Elijah Cummings, D-Md., had nothing to do with race, and was simply a response to unjustified remarks from the House Oversight Committee chairman.

"The president is attacking Mr. Cummings for saying things that are not true about the border," Mulvaney told host Chris Wallace on "Fox News Sunday," saying that the president's remarks have "absolutely zero to do with race."

Mulvaney pointed to a House Oversight hearing where Cummings cited conditions at the border, claiming that children were sitting in their own feces.

"That's just not right. It's not accurate," Mulvaney said, stating that Cummings does not have any first-hand knowledge about border conditions.

"Mr. Cummings has not been to the border in recent memory, certainly not during this administration," Mulvaney said.

This week, the Senate is set to vote on a budget bill which raises spending by $324 billion over spending caps. When asked if Trump wants it to pass, Mulvaney said yes, and that Trump will sign it, despite the excessive spending. He justified it by touting money that will be going toward defense and the Department of Veterans Affairs.

"Did we spend more money than we wanted to? Yes. Did we get a lot in return? Yes."

Mulvaney also celebrated the recent Supreme Court decision that allowed the Trump administration to use $2.5 billion in Defense Department money on construction of a wall along the southern border.

"That's the right decision," he said.