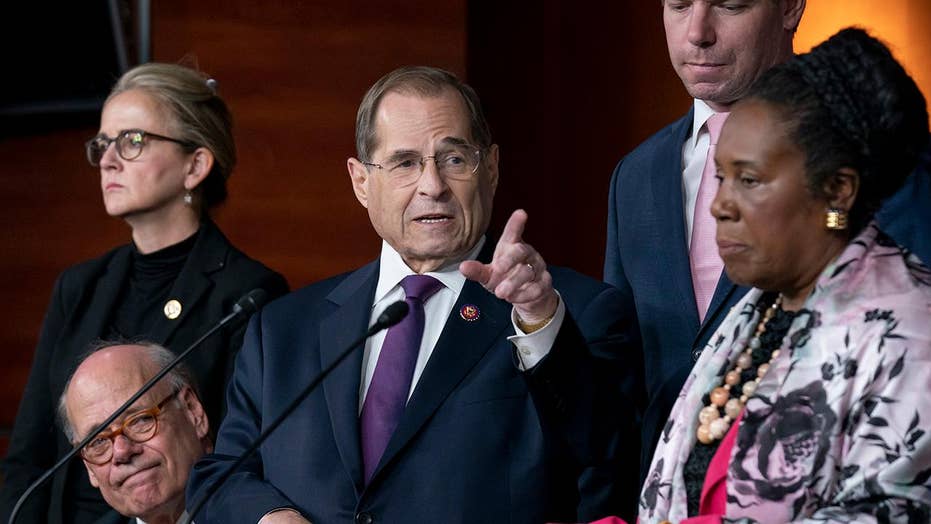 Robert Mueller’s testimony to Congress, by any reasonable standard, should have been the swan song of the impeachment movement.

To state the obvious, there is no evidence that President Trump or any other American probed by the Mueller investigation conspired with the Russian government to influence the 2016 presidential election.

At worst, both campaigns were willing to take research on their opponents fed by Russians. On this score, it appears the Clinton campaign was far more successful, though the use of disguised campaign funds for this purpose has not yet been probed.

ROB REINER TO DEMS OPPOSING IMPEACHMENT: 'I'M SORRY IF YOU LOSE YOUR SEAT, BUT WE'VE GOT TO STAND UP FOR DEMOCRACY'

I rejected the "collusion" theory early on based on two principal facts: 1) Any fair reading of the Steele dossier reveals it is ridiculous on its face, and 2) The texts from Lisa Page and Peter Strzok conclusively showed bias at work behind the scenes.

On top of these facts came the revelations that the dossier was all paid for by the Democratic National Committee and the Clinton campaign, and that it was all being fed to the FBI through the wife of a senior official who was also on the payroll of that same effort to discredit Trump.

For two years, I have had to qualify my beliefs with something like "subject to the findings of the Mueller report." Well, the Mueller report found nothing. There was no secret witness, no unearthed secret communications, no secret plot coordinated through hidden Trump Tower servers, no trips to Prague, no quid pro quos to remove sanctions.

So why does a third or more of the public still believe in Russia collusion? Because partisanship by our politicians and some in the media knows no bounds, and to partisans, facts and evidence are simply inconvenient bumps on a road to power.

That brings us back to the Mueller testimony and the Mueller Andrew Weissmann investigation. Mueller turned out to be the classic emperor-has-no-clothes witness. He once again said that he did not indict Trump because of the Justice Department policy against indicting a president only to once again retract the statement hours later.

He may be old, but he surely understood he was playing and retracting that card — he would have practiced that question 10 times as it was the only anti-Trump card remaining in his dwindling hand. He ignored that Attorney General William Barr, former Deputy Attorney General Rod Rosenstein and career Justice Department lawyers all determined that the facts he listed didn’t constitute criminal obstruction of justice.

The president was, as far as the Justice Department was concerned, cleared on obstruction of justice.

Mueller’s weak grasp of the facts, combined with his deputy Weissmann's documented history of prosecutorial abuse, strongly suggests Weissmann ran the investigation, not Mueller. It also indicates that Weissmann enjoyed free rein to go after not just the facts, but the people associated with the president.

Those people were systematically investigated for any and everything that may have gone wrong in their lives and put in a prosecutorial vice, and still Weissmann turned up nothing significant. He found that Paul Manafort, Michael Cohen and perhaps Gen. Michael Flynn had engaged in wrongdoing unrelated to the president. The rest were tripped up by the investigators themselves, who created crimes of intimidation.

Perhaps the most unfounded of all of these is the prosecution of Roger Stone. Finding nothing in his personal or business life to hold over his head, Weissmann combed through his congressional testimony to allege he was hiding his communications with Jerome Corsi. Even if true, it was of no significance to the investigation — Corsi has been widely banned from the internet for being something of a kook.

Nonetheless, scores of armed agents with amphibious units in tow took Stone down in full view of CNN, which just happened to be on the scene. Weissmann, applauded by partisans, will never face accountability for the abuse of civil liberties inherent in his entire investigative approach.

Having hit a dead end, the impeachment train is seeking new witnesses and new subpoenas to tie the president up in investigations and continue the empty threat of impeachment that has the support of about 25 percent of even the House of Representatives. Democratic candidates for president should be wary of all this rather than cheer it on. It’s one of them who might get elected and face midterm elections that flip Congress, and they will find themselves subject to retaliatory investigations normalized by events taking place today.

Targeting political opponents through the legal and subpoena process after a massive investigation revealed no collusion undermines our democracy. It is a far greater threat to our country and its institutions than any ads on Facebook. Whether you think the FBI acted out of political malice (which is now being investigated) or a sense of duty, there is simply no evidence that the president ever committed a crime, or that his top aides were involved in collusion or conspiracy. Nothing of consequence alleged in the Steele dossier was ever proven true.

Mueller's testimony confirmed these basic facts, and it should put impeachment investigations in the rearview mirror.