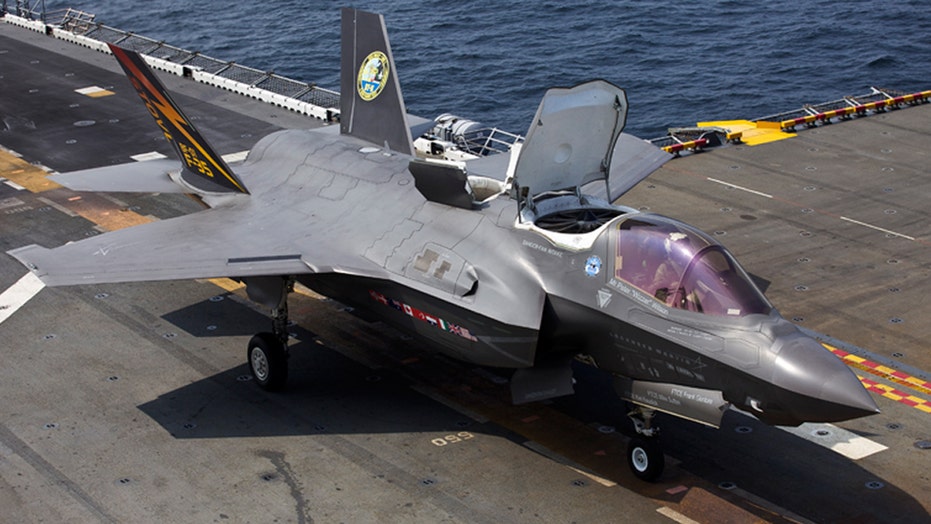 With a $110-million price-tag, the F-35 fighter jet is the most expensive weapon ever built for America's arsenal -- but nine years into development, it's also a weapon still "not acceptable for combat," and plagued by huge cost overruns that one lawmaker is calling a "scandal."

Those were the troubling messages exchanged Tuesday during a Senate Armed Services Committee hearing into the $379-billion weapons program -- along with an acknowledgement that the U.S. can't afford to see the program fail.

“If the F-35 doesn’t succeed, we’ll be in a pickle,” J. Michael Gilmore, the Department of Defense’s director of operational test and evaluation, told members of the Senate Armed Services Committee.

The primary technical issue centers on the so-called “brain” of the F-35 -- known as the Autonomic Logistic Information System, or ALIS -- which controls plane operations, maintenance, scheduling and supply chain management. It’s considered as essential to the aircraft's operation as the airframe and engine. Of the myriad concerns involving ALIS, the primary is that there is no backup for data processing – which means that a failure could in theory ground the entire 2,443-aircraft force. Other issues include a lack of testing, inability to communicate with legacy systems and cybersecurity questions

“ALIS remains immature and requires labor-intensive workarounds not acceptable in combat,” Gilmore said. His testimony was the most critical of the F-35 program -- and the least optimistic about the ability to quickly fix and deliver an update for ALIS. He spoke of “significant” cyber security issues and testing that’s been “hardly sufficient.” A 2013 Pentagon study projected any delay with ALIS could hike program costs $20-$100 billion.

Yet Gilmore also acknowledged how much – in term of manpower, money and warfighting ability – was on the line with the jet, which is intended to be used by the Air Force, Navy, Marines and several foreign nations.

Air Force Lt. Gen. Christopher Bogdan, the F-35’s program manager, was more bullish on the plane’s prospects. He heads a crew of 2,590 people with an annual budget – excluding the plane costs – of $70 million.

The delivery of an improved ALIS is only 60 days behind, Bogdan said, and should be ready by October. Gilmore had said 2018 was a more realistic timeframe for a system to be in place.

While committee chairman Sen. John McCain, R-Ariz., criticized the development of the F-35 as “a scandal” with cost overruns that “have been disgraceful,” Bogdan tried to put the program in context.

A pilot fires an F-35A's machine gun midflight during a test. (Lockheed Martin)

“The F-35 is a long-term investment in the defense of this nation,” he said. “And our future adversaries are not sitting still. And in the next 10, 20, 30 years we may very well need the capabilities that the F-35 will provide us to maintain our leadership in the world.”

Those capabilities include high-tech abilities such as projecting information onto $400,000 custom-built pilot helmets. Special cameras around the plane give pilots a 360-degree view of their environment. Sensors on one F-35 will interact with nearby planes to form a more accurate picture of heavily-defended battle environments that are then loaded onto plane computers in real-time.

“What makes us better and special is what’s on the inside of those airplanes,” Bogdan said. “Our radar, our abilities to take information into the battle space – and the weapons to employ that knowledge. That’s what makes it different.”

But of course, such impressive technological leaps come with stumbles.

“The F-35 is still in development, and this is a time when challenges and discoveries are expected,” Bogdan said.

Frank Kendall, the under secretary of defense for acquisition, technology and logistics, has been around the program since its inception in 2007. He’s seen a beginning where production on the jet began before the plane’s design was even tested. And Kendall has been a part of the turnaround. A few F-35s are already flying and Bogdan is hopeful of having 145 delivered by 2020.

“The F-35 is no longer a program that keeps me up at night,” Kendall said.