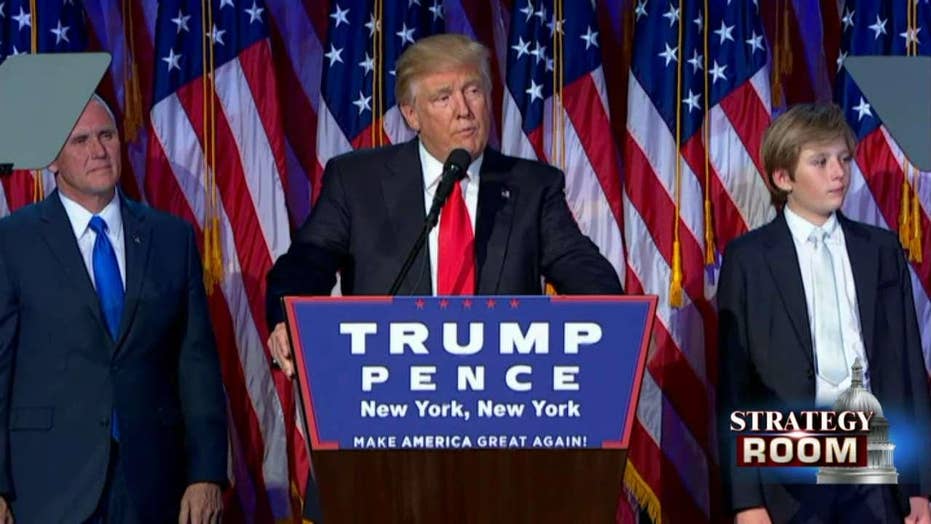 What will Trump do first as president in 2017?

Strategy Room: Jeff Lederer and Frank McCarthy discuss Donald Trump's campaign promises and if they will translate to action once he is in office

The man who made “For the Love of Money” his television show’s theme song was outraised, outspent and out-advertised by Hillary Clinton's billion-dollar bid.

The outcome underscores how, through the entirety of his successful White House bid, Trump did more with less.

This included: A smaller, but more agile campaign staff (a reported 130 staffers to 800 for Team Clinton). A reliance on gut instinct over debate prep, extensive polling or new-age data mining. And a bare-bones ad operation that benefited from Trump’s unique ability to gain free media through TV show call-ins and Twitter tirades.

Trump’s campaign also lagged behind that of Mitt Romney, the man who preceded Trump as Republican presidential nominee. Romney, the GOP and allied groups raised $1.019 billion in a losing effort. Trump and his allies raised $795 million, according to The Washington Post, and won.

Clinton, along with the Democratic Party and allied groups, raised $1.3 billion overall as of Oct. 19.

The differences are even more stark when it comes to advertising.

The Clinton campaign and its allies accounted for about 75 percent of all TV ads aired during the general election in Florida, Ohio, North Carolina and Pennsylvania, according to data from the Center for Public Integrity provided to Time. Yet Trump won all four of those swing states, beating Clinton by a combined 820,518 votes.

But Trump needed to spend just $74 million in ad dollars to capture the 279 electoral votes that assured his victory on Tuesday, with three states yet to be called.

Not only did Clinton’s monetary advantage fail to win her an Electoral College victory, it also didn’t help turn out Democratic voters in the same numbers as the two previous presidential elections.

With less money spent, Trump captured about the same number of total votes as Romney in 2012 – just fewer than 60 million (though 2016’s tally hasn’t been completely counted). Clinton was leading Trump in the popular vote total by about 200,000 votes as of Thursday morning. But that total badly trails the numbers put up by President Obama in 2008 (69.4 million) and 2012 (65.9 million), despite a comparable amount raised and spent on ads.

In the final analysis, the man who wrote “The Art of the Deal” ended up with a great one.