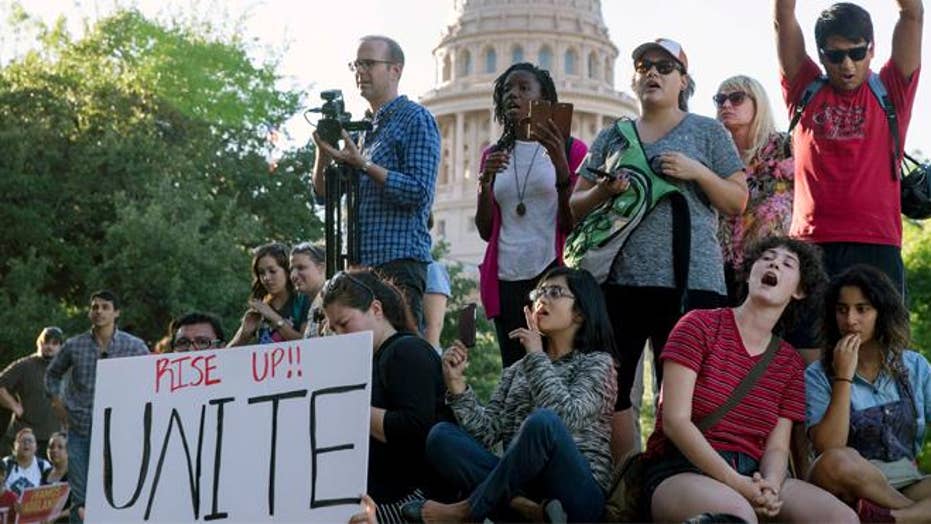 Jeanne Zaino and Flip Pidot on President Trump's efforts to pull funding from Sanctuary cities, and how some cities may one-up their status and pay legal fees for undocumented immigrants

Sacramento became the latest city this week to go above and beyond ‘sanctuary’ policies by approving the use of taxpayer dollars to support the legal defense of illegal immigrants facing deportation.

The City Council voted unanimously Thursday night to draw $300,000 from the general fund to “provide urgent legal and support services to Sacramento families facing the immediate threat of separation due to deportation.”

The plan, backed by the mayor, fits a trend of local and state lawmakers taking similar action. As the Trump administration separately faces a court setback in its bid to cut off federal funds to sanctuary cities, those jurisdictions are only doubling down.

Earlier in the week, officials in Michigan's Washtenaw County gave initial approval to pay such legal bills with taxpayer funds.

Even in the small New York city of Ithaca, politicians are gearing up to spend emergency funds to help illegal immigrants taken into custody by Immigration and Customs Enforcement agents, according to The Ithaca Voice.

And on a broader scale, New York lawmakers recently signed off on a statewide legal defense fund, while California legislators are considering a bill creating a fund that could carry a price tag of up to $12 million per year.

In Sacramento, Councilman Eric Guerra told Fox News in an email that their move to assist with legal defense reflects a “commitment to treat all Sacramento residents equally and with the dignity and respect they deserve.”

But the moves have faced criticism, at a time of limited resources for cities across the country.

“It is simply bad public policy to be spending public funds at a time when everyone is strapped for cash and cannot fund the money for vital services. Even if they are relatively small funders, they are directing much-needed resources from schools and roads to meet the political desires of lawmakers,” said Ira Mehlman, spokesman for the Federation for American Immigration Reform (FAIR), which supports stricter controls on immigration.

A two-year “Justice” Fund rolled out in December by Los Angeles Mayor Eric Garcetti is one of the nation’s largest at $10 million. Its funding source is a 50-50 split between private foundations and taxpayer dollars from residents of Los Angeles and Los Angeles County.

Further, Seattle passed a measure in April to direct $1 million toward a legal defense fund for immigrants and refugees in need of legal representation. That money will be given in the form of grants to community organizations that assist individuals facing deportation or who want to become naturalized.

Immigrants held for deportation may have a right to a hearing before an immigration judge, and to be represented by a lawyer in their civil proceedings.

The government, however, is not required to pay for it, unlike in a criminal matter.

The high cost of navigating the immigration system is not new, but an executive order signed by President Trump prompted action, immigration activists say.

“There was a change of policy with the executive orders that prompted us to do this. [Under Obama], there was care being taken not to separate families and the executive orders show there is an interest in deporting many, many people. That motivated us to set up these funds to make sure these people have due process,” Diana Morris, director of Open Society Institute–Baltimore, told Fox News.

Baltimore did not appropriate funds, but did advise on matters related to funding and running Safe City Baltimore, an education and legal defense fund, according to Catalina Rodriguez-Lima, director of the city’s Office of Immigrant and Multicultural Affairs (MIMA).

Dale Wilcox, executive director and general counsel of the Immigration Law Reform Institute, says the use of public funds to pay the legal fees of illegal immigrants is “insulting” to the taxpayers and legal residents.

“It also provides yet another incentive for more illegal aliens to come and will further clog up our immigration courts, some of the most backed up in the nation,” he said.

ILRI recently filed a friend-of-the-court brief in a case involving the question of whether immigrants facing expedited deportation are guaranteed the right to any legal representation.

In February, the U.S. Court of Appeals for the Ninth Circuit ruled that immigrants detained in the country illegally have no right to a lawyer, but the case has been appealed to the full panel.