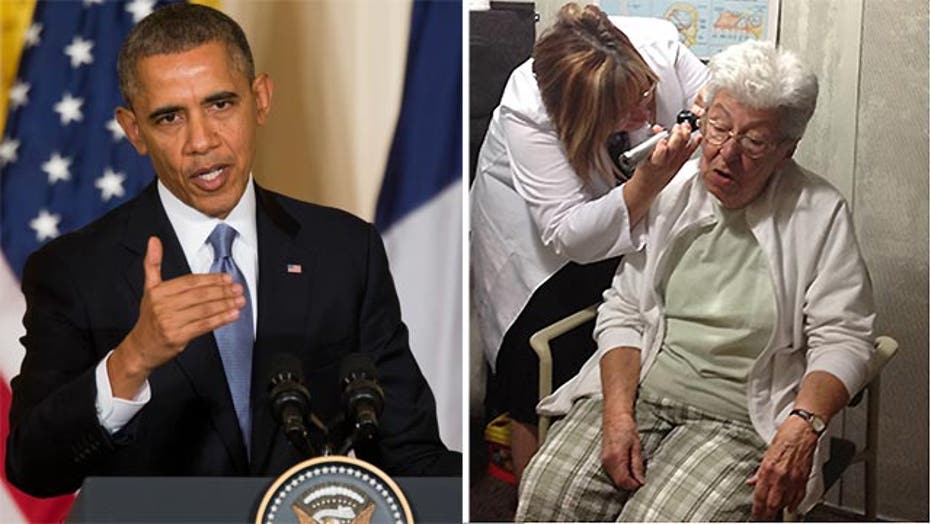 WASHINGTON – President Obama signaled Tuesday he'd be open to more changes in the implementation of his signature health care law, as he defended a newly announced delay in the requirement on companies to provide insurance.

The president addressed the changes during a joint press conference with French President Francois Hollande, who is in Washington on an official state visit. Under criticism from Republicans for repeatedly tweaking the implementation of the health care law, Obama said the latest delay was meant to help employers operating in "good faith" so that no one is "unnecessarily burdened" or punished.

"This was [an] example of, administratively, us making sure that we're smoothing out this transition," Obama said. Without going into detail, the president suggested the administration would continue to be flexible on the law.

"Where we've got companies that want to do the right thing and they're trying to work with us, we want to make sure that we're working with them as well. And that's going to be our attitude about the law generally -- how do we make it work ... in an optimal sort of way," he said.

The administration on Monday announced a second delay for the so-called employer mandate. It had initially been pushed off until 2015, but in a concession to business, Treasury Department officials announced Monday that the administration would not enforce the rules across the board next year.

Instead, the administration will give employers with 50 to 99 employees until 2016 before being required to cover full-time staff or pay a penalty.

Republicans complained that while the decision does give employers in some cases needed relief, it still burdens individuals who, under the law, are for the most part required to get health insurance in 2014. They used the latest delay to renew their call for the law to be entirely suspended or repealed.

"The White House seems to have a new exemption from its failed law for a different group every month. It's time to extend that exemption to families and individuals-not just businesses," Senate GOP Leader Mitch McConnell said in a statement. "The real answer is to repeal ObamaCare and replace it with reforms that lower costs and that Americans support."

At one point, Obama clarified there is no country with which the United States has "a no-spy agreement." The Obama administration has come under severe criticism from allies in Europe and elsewhere following revelations that their leaders had been subject to U.S. spying. Still, Obama stressed the importance of balancing privacy and security.

Obama also vowed to come down like "a ton bricks" on firms that violate sanctions against Iran.

The United States and France are among the countries that signed an interim nuclear agreement with Tehran. The agreement halts progress on the Islamic republic's nuclear program in exchange for easing international sanctions. Talks on a final deal begin next week in Vienna, Austria.

Speaking on companies doing business with Iran in violation of sanctions still in place, Obama said, "We will come down on them like a ton of bricks" if they don't hold up their end.

The Obama administration has objected to the interest French businesses have shown in Iran since the sanctions were eased. More than 100 French executives visited Tehran last week, a trip Secretary of State John Kerry told his counterparts in Paris was "not helpful."

Obama also announced that he's accepted Hollande's invitation to travel to France for the June 6 ceremony marking the 70th anniversary of the D-Day invasion of Normandy.

The remarks came at a news conference in the midst of an official state visit, held as Hollande is facing romantic upheaval that resulted in his showing up stag to the White House. The 59-year-old ended his relationship last month with girlfriend and French first lady Valerie Trierweiler after it was revealed that he was having an affair with an actress.

The White House has carefully avoided any mention of Hollande's personal drama and has moved forward with a grand welcome reserved only for America's closest allies.

On a cold February morning, Obama, first lady Michelle Obama and a military honor guard welcomed Hollande as he arrived on the South Lawn of the White House. The two leaders shook hands before a cheering crowd, many waving American and French flags, and greeted two American military veterans who served in France during World War II.

Following the arrival ceremony, Obama and Hollande held a private meeting in the Oval Office before appearing before the press in the East Room. The Obamas planned to fete Hollande at a grand state dinner Tuesday night attended by more than 300 dignitaries and celebrities.