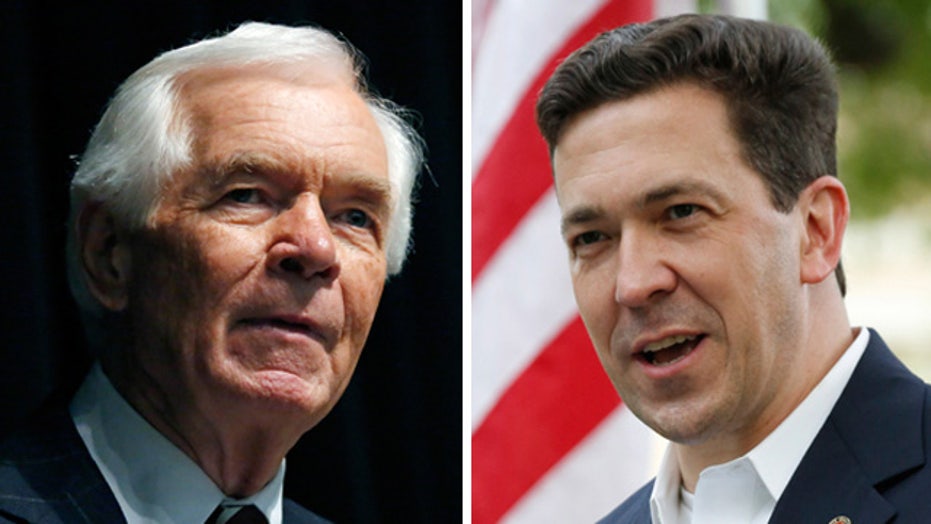 Whether Thad Cochran will stand for election to a seventh term in the Senate, or whether his political career ends Tuesday night is anyone’s guess.

The latest polls in Mississippi favored challenger Chris McDaniel, though a week ago, those same polls had Cochran with a small lead.They were conducted by Chism Strategies – a Democratic firm – and included only people who voted in the Senate primary on June 3.

For the past three weeks, Cochran has been barnstorming the state relentlessly, reaching out to people who didn’t vote in the primary – tapping into a substantial well of voters who stayed home on June 3, assuming Cochran would cruise to victory yet again.

One of those voters is Terri Matthews. She was babysitting her grandson on primary day and couldn’t make it out to the polls. Matthews was at her local voting precinct Tuesday morning in Ridgeland, grandson in tow, to cast her ballot for Thad Cochran.

“I always vote and felt bad about not voting. But then once I realized it was so close, I knew I had to vote today,” Matthews told Fox News.

Cochran has also been reaching out to Democrats who didn’t vote in the June 3 Democratic primary – warning them that they won’t be happy if Chris McDaniel becomes the next Senator from Mississippi.

Nurndun Shekoni, an immigrant from Nigeria, answered Cochran’s call Tuesday morning. A Democrat, he appreciates Cochran’s willingness to compromise with Democrats in Congress on occasion to get things done.

“Ever since I have come here, Cochran has helped the state – brought a lot to the state.Helped a lot of people in the state, and I believe that he is the right person,” Shekoni told Fox News.

That willingness to compromise, however, might be Cochran’s undoing. His challenger, Chris McDaniel, has been hammering Cochran for not fighting the conservative fight for Mississippi.And he says Cochran’s outreach to Democrats is proof of that.

“Any party now that would voluntarily go out and recruit liberal Democrats to save and support another liberal Republican is a party that has truly lost its way,” McDaniel told Fox News in an exclusive one-on-one aboard his campaign bus. “And to that extent, Senator Cochran is showing just how Liberal he’s become.”

From the affluent suburbs of Memphis in the north, through the pine belt of south Mississippi, to the Gulf coast, McDaniel has been making the case that Cochran is part of the problem in Washington that has saddled this nation with a $17.5 trillion debt.

He says if elected, he will fight for a balanced budget amendment. And, he acknowledges, that will mean Mississippi, which gets about 46 percent of its revenue from the federal government, will have to do with less.

“Every state, to some extent, is addicted to federal spending,” McDaniel told Fox News. “Smart, intelligent long term forward thinking people have to get in positions of authority. And phasing out the debt and deficit spending slowly – so there’s not as much pain.”

McDaniel says any pain Mississippi and other states feel in the short term will pale in comparison to what will happen if the debt continues to balloon.

“We’re trying to avoid the catastrophe is what we’re trying to do, by getting in and being responsible right now,” he told Fox News.

At every stop on his 21-day blitz, Cochran touted the federal largesse he bestowed upon Mississippi by virtue of his position on the Appropriations Committee.At a veterans’ event in Jackson Monday, he said that same power and influence could be used to rein in spending if Republicans take control.

“A seat on the Appropriations Committee gives me an opportunity to weigh in on ways to get our best bargain from private sector contractors who are supplying things we need in the military,” Cochran told Fox News.

At that event, Cochran was joined by Arizona Senator John McCain.McCain’s grandfather was born in Mississippi, and the Naval Air Station in Meridian is named for John S. McCain Sr.Though McCain rails against the earmarks that earned Cochran such adoration in the state, he said Cochran’s experience and influence in Washington is what the nation needs in troubled times.

“Senator Cochran is working on his service to the state and the country overall. We probably agree on 9 out of 10 issues – I don’t expect to agree on every single issue with Senator Cochran,” McCain told reporters after the event.

But an observation in McCain’s 2002 book “Worth The Fighting For” resonates in this election, and in fact, may be Cochran’s Achilles heel.McCain said one of the biggest mistakes many politicians make is that they simply stay in Washington too long. Between his Senate service and time in the House, Cochran has been in DC for 41 years.

For many McDaniel voters, that’s just too long.McCain, who is a year older than Cochran, disagrees.

“Well, they can make that case,” McCain told Fox News. “And that’s a judgment that the people make, but I think that there’s also a great benefit in having long time service. We need experienced talent and leadership, not on the job training.”