Will the Senate confirm Mike Pompeo?

National security analyst makes the case for the secretary of state nominee amid opposition from lawmakers.

Cracks are beginning to show in the wall of Democratic opposition to secretary of state pick Mike Pompeo, even as the CIA director contends with rare turbulence on the key Senate panel considering his nomination.

Indiana Sen. Joe Donnelly was the latest Democrat to announce his support, saying Monday on Twitter that Pompeo is “capable of advancing U.S. interests and leading the State Department.”

He follows Democratic Sens. Joe Manchin of West Virginia and Heidi Heitkamp of North Dakota, who both are facing tough reelection battles, in backing Pompeo.

But President Trump’s pick for America’s chief diplomat nevertheless faces the prospect of a rare rebuke Monday afternoon from the Senate Foreign Relations Committee, where every Democrat and Republican Sen. Rand Paul has expressed opposition to him.

Given that Republicans have only a one-seat majority on the panel, this means the committee could either narrowly recommend against Pompeo or not issue a recommendation at all to the full Senate – which is expected to consider his nomination later this week regardless of the committee decision.

Such a snub from the panel would be historically rare – the first time since 1925, when the committee began keeping open records about confirmation action, that a secretary of state nominee has received an unfavorable committee vote.

Trump and his allies have slammed Democrats for suddenly lining up against Pompeo.

“Those who would not vote for Pompeo are just playing politics,” House Majority Leader Kevin McCarthy, R-Calif., told Fox News.

Trump on Pompeo vote: I don't think Rand will let us down

President Trump discusses the likelihood Mike Pompeo will be confirmed as secretary of state during a meeting with the Japanese prime minister.

Still, Sanders touted the three Democrats who have committed to support Pompeo. That support puts Pompeo in solid position to eventually win confirmation from the full Senate, where he needs a simple majority to succeed Rex Tillerson, who was ousted in March. With Paul’s opposition and Sen. John McCain’s ailing health, Pompeo was likely to need a few Democratic supporters.

“We certainly hope some members will change their minds,” Sanders told Fox News earlier Monday. “At some point Democrats have to decide whether they love this country more than they hate this president, and they have to decide if they want to put the safety and security and the diplomacy of our country ahead of their own political games.” 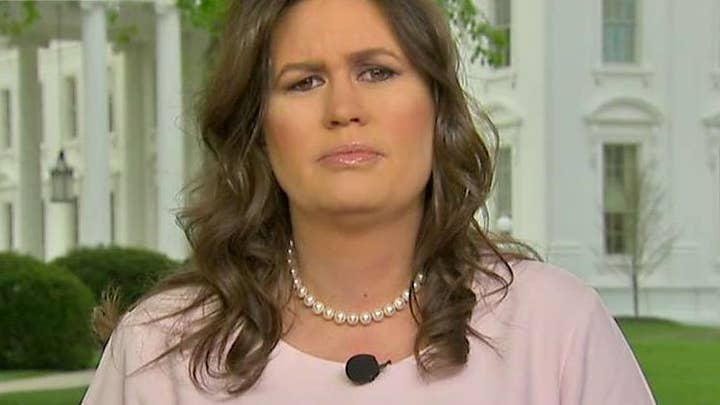 But so far, at least four Democrats who voted to confirm Pompeo as CIA director have indicated they will not do so for secretary of state: Sens. Dianne Feinstein of California, Tim Kaine of Virginia, Brian Schatz of Hawaii and Jeanne Shaheen of New Hampshire.

Trump sent Pompeo to North Korea over Easter weekend to meet with the rogue nation’s leader, Kim Jong Un, according to the White House. Trump said on social media “a good relationship was formed” during the meeting, and the two men reportedly discussed the release of three Americans being held in the Asian nation.

“I don’t expect diplomacy to be negotiated out in the open, but I do expect for someone who is the nominee to be secretary of state, when he speaks with committee leadership and is asked specific questions about North Korea, to share some insights about such a visit,” Menendez recently said.

While he was confirmed to lead the CIA with a 66-32 vote last year, Pompeo has faced new challenges in the Senate, with lawmakers decrying a “lack of diplomacy” they say is needed to act as the nation’s top diplomat. Those opposed to Pompeo have pointed to his hawkish foreign policy positions and comments about minorities, particularly Muslims and gay people.

Paul, the libertarian-leaning senator from Kentucky, was the only Republican to vote against Pompeo during his CIA confirmation hearing.

“The Secretary of State is a very different role than CIA director, and it’s not the kind of position you learn on the job,” Feinstein said in a statement. “I sense a certain disdain for diplomacy in Mike Pompeo that I believe disqualifies him from being our next senior diplomat.”

Schatz said he is voting against confirming Pompeo because he has “an alarming tendency towards military provocation and brinkmanship.”