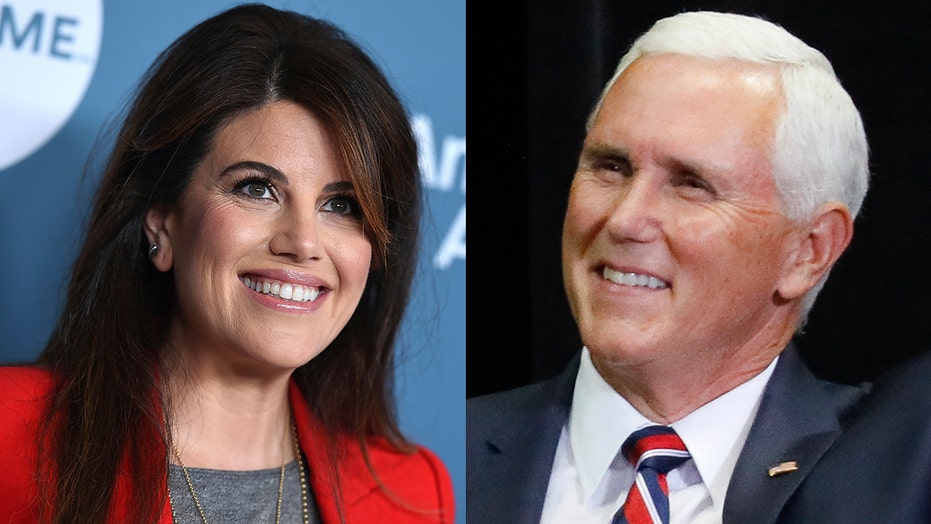 Monica Lewinsky, infamous for an affair with former President Bill Clinton, mocked Vice President Mike Pence for comments he made about kneeling in prayer.

The Washington Times shared the headline "Mike Pence: 'Spend more time on your knees than on the internet,' referencing an answer he gave during a Q&A with the Alliance Defending Freedom on Tuesday.

And on Thursday Lewinsky, who produced the third season of "American Crime Story" centered on the 90s scandals that put her in the national spotlight, responded to a tweet saying, "OK, who's gonna tell him?"

Lewinsky, who has taken up an anti-cyberbullying campaign, tweeted: "def not me."

Lewinsky's mockery isn't the first time Pence has been targeted for how he talks about prayer. The ladies on "The View" said the former governor of Indiana has a "mental illness" for talking to Jesus.

He has also been lambasted as a "sexist dinosaur" for not dining alone with other women besides his wife, similar to the "Billy Graham rule" that is now known as the "Mike Pence rule," and has been criticized by South Bend, Ind. Mayor and Democratic presidential candidate Pete Buttigieg for "hurting people" by advancing "homophobic policies."

On Tuesday, Michael Farris, ADF president, CEO, and general counsel, was asking the vice president advice on how he deals with attacks on his faith.

“No. 1 is, spend more time on your knees than on the internet," Pence replied. "Is that OK?"

The outspoken evangelical then went on to share how he and his wife, Second Lady Karen Pence, who was harassed for teaching art at a private Christian school outside D.C., work to forgive anyone who speaks against them.

"As a Christian believer, we're charged to pray for our loved ones but also pray for our enemies. You have lots of opportunities in politics to do that," he added. "But I would say that forgiveness is a great gift."