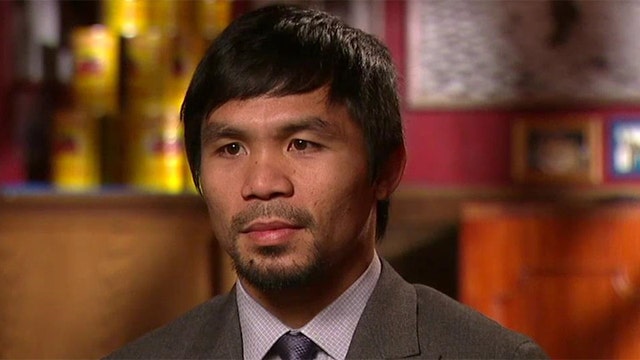 Manny Pacquiao on faith, politics and life in the ring

World champion boxer is our Power Player of the Week

Manny Pacquiao recently defeated Keith Thurman in the ring but last Wednesday he engaged in a different fight over the death penalty in the Philippines -- and Jesus entered the ring.

Pacquiao, one of the greatest professional boxers of all time, who is also a member of the Philippines Senate, was defending a death penalty bill on the Senate floor. Capital punishment has been banned in the country since 2006 and during a discussion about a controversial bill to legalize it, a Philippine senator tried to use Jesus to KO the born-again Christian's argument.

"As a Christian, I subscribe to what the Bible says about submitting to governing authorities," Pacquiao said in his privilege speech. "I can cite Bible verses to support my stance, but let me make this very clear, Mr. President, the focus of our debate on death penalty should be on the basis of its constitutionality."

Then, Senate Minority Leader Franklin Drilon raised the issue of Jesus' death on a cross to counter the boxing champ, pointing to the fact that capital punishment would be imposed by "fallible" judges and justices of the Philippine court, according to Inquirer.net.

"No one is perfect," Pacquiao said, adding the "most important thing is we have to trust our authority...the government."

Drilon asked:  “In fact, in the history of man, only one can claim infallibility? Would the gentleman know that man?”

“Jesus Christ,” Drilon responded, “And yet Jesus Christ was a victim of wrongful execution. Is that correct?”

Pacquiao disagreed, noting that Jesus Christ sacrificed himself to save the lives of people.

“Are you saying the execution of Jesus Christ was a correct execution?” Drilon then asked.

“Perhaps, what the gentleman means is that the redemption would not have been possible if Jesus did not die on the cross…” Sotto said.

Pacquiao defended himself: "The Bible says, Mr. President, that Jesus said He can command His angels to protect Himself but He didn't do that because, purposely, He was going there to sacrifice himself for us to be saved for eternal life."

The room erupted in laughter when Drilon tried to clarify that that was the very reason Jesus was "wrongfully executed."